MacBook Pro engraving -- What NOT to do

One of the first things I planned to do with my Glowforge when I got it nearly two years ago was to engrave my MacBook Pro. Unfortunately, however, the pattern I purchased and tediously adapted for that purpose ended up being too big to load into the GFUI, so I used it for my iPad instead (although I chickened out and used veneer instead of engraving it directly).

When I discovered recently that, thanks to all the improvements since then, the larger file will now upload, I decided to FINALLY do my MBP.

My pattern didn’t have a cutout in the center for the Apple logo, because I wanted it to go right up to the logo, but the schematic I had downloaded for my model of MBP actually didn’t exactly match as far as size of the logo, so I had intended just to mask the logo with aluminum foil instead.

Turns out, that wasn’t actually the best idea. The foil stopped the laser from engraving on the logo, but I had neglected to consider an important detail: Lasers get HOT. 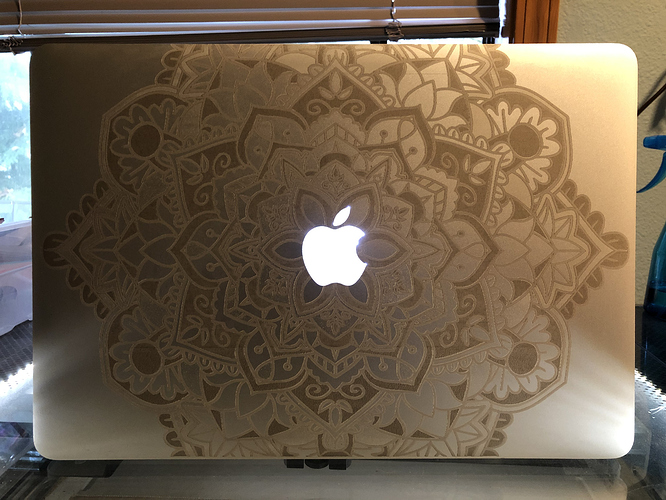 Until you look at the Apple logo itself… 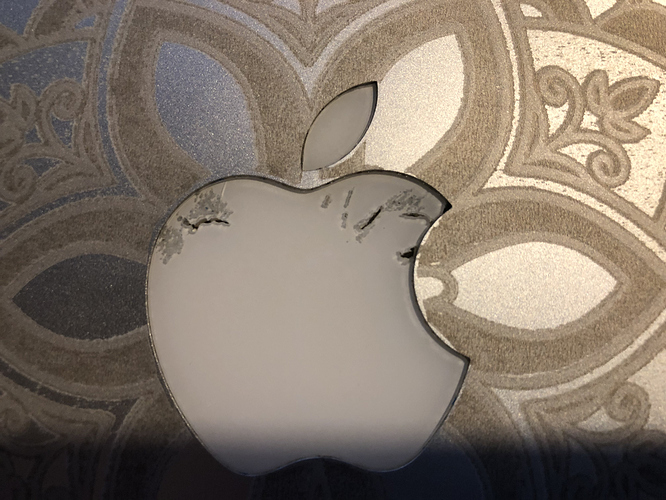 And on the other side, there’s sort of a permanent ray of sunlight splashing onto the middle of my screen. 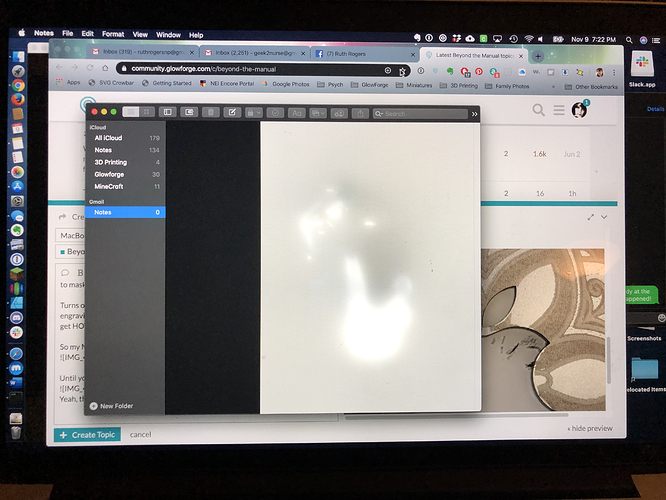 So, the moral of the story is: Cut out the center of your design!

Oh wow, never would have thought it would cut through into the display itself! I’m so glad it’s still functional, at least. And it’s VERY pretty on the back…

I wonder how much a screen repair runs…

I wonder how much a screen repair runs…

Maybe we’ll find out…but not until after we finish paying for this move!

It really looks just like when a ray of sunlight hits the screen, which helps me to sort of ignore it after a while. But then my brain gets really confused when I look up and it’s dark outside!

It’s really bright on light backgrounds, and hardly shows at all on dark ones. I showed it at its worst in the photo.

Ouch! But it is beautiful

Amazing it didn’t short out a circuit board, there is a lot going on inside.

Yeah, those dark places are actually burned right through the plastic. Ugh.

A lesson in engraving (marking) metal. If it’s not all metal you’ve got to watch out for the non-metal parts. All of our advice that the laser can’t hurt the metal is true but the Apple logo plastic is another thing entirely.

As you say, cut out the logo from your design so the laser doesn’t fire or mask it in a way that heat and laser won’t be an issue if you can’t get the layout precision you want. Something like a 1/8 wood cut out of the Apple topped with a piece of foil or thin metal. The foil stops the burn and the wood stops the heat.

I bought a replacement screen from amazon after my son threw a bone into screen, it was not rocket science to replace, a few torx screws and ribbon wire. the hardest part was releasing the torx that held the hinge place, so I attached the bit to my power drill and leaned on it and it released. maybe a 20 minute project at best? Also great youtube videos on it.

It’s in the list, actually. Those are the settings I used.

Oh, it is. neat…maybe they need to add a warning:

Do not laser the apple icon

So I wanted to engrave the cover of my macbook air, its one of the reasons I bought the glowforge. I selected a pattern I liked, applied a circle in the middle and deleted the pattern using the mask tool, and brought it over to the glowforge user interface. It does not know how to handle masks (yet, it says) so the pattern was a complete rectangle. I tried several more tricks to delete the pattern (I am using inkscape) with no luck, so I thought I would take a shortcut by just covering up the apple logo with a piece of wood (I used draftboard). Put in the settings for Macbook pro and started the pattern on the laser using the score settings, not engrave. When it was all done, the score settings for a metal laptop cut right through draftboard, barely slowing the laser down. I laser etched the metal, the apple logo, and my screen. Now a little galaxy shines through on my screen to remind me how dumb I was. I still need to learn how to delete sections of a svg pattern, using the mask tool was not it. 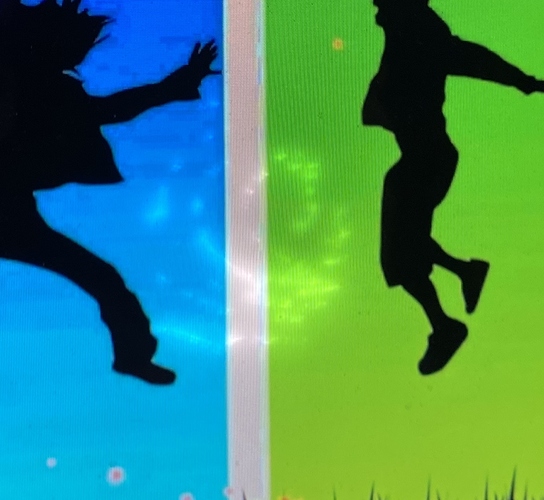 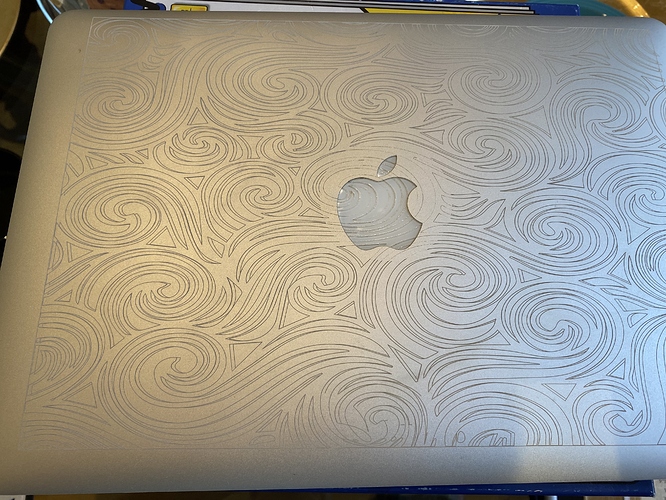 I thought I would post of my error and the glowforge topic generator found this topic too similar to mine, so I thought I would revive the topic and reply to it instead of starting a new topic.

Now a little galaxy shines through on my screen to remind me how dumb I was.

Ouch. I think @geek2nurse had the same thing happen to her Mac.

A little disk of aluminum foil tacky glued to the logo would seem to be a good idea to avoid the potential of etching the glass.

The aluminum foil didn’t work for me (scroll up for my sad story!). Even if it stops the laser, it still lets the heat through enough to melt the Apple logo. (It’s plastic, not glass!)

Even if it stops the laser, it still lets the heat through enough to melt the Apple logo.

Ah. A foil/wood sandwich then. A small 1/4" or maybe even a 1/8" piece of ply or MDF should be good enough insulation.

I made a white vinyl Apple logo (on my Cricut) to cover my maimed one.

Thank you all. After seeing the designs I want to do it more than ever but will find a apple shield first

Having dealt with apple screens that are damaged, depending on the age it might be cheaper to get a new one. Back in the day, a damaged screen would run around $1200, much more than that and it was considered not economically repairable. And with the apple logo also damaged they would probably replace the whole lid, screen and all. Unless you got AppleCare with accidental damage, the it might well be worth. Just deductible then.

I decided to just live with it. It hasn’t been too bad. But the MBP is getting old and starting to crash randomly, so it looks like it’s time to replace it.