Just as a starting point, I have found decent success with the following for 3/32" hobby balsa wood:
Score: 145/2, Cut: 245/50. The score goes partway through the wood, such that if I scored the artwork on both sides, I am worried it would cut all the way through. Might have to play around with that on the next version.

Made a model (with my son) of a North American B-25J Mitchell based on the SVG file found on the wikipedia page for the plane. 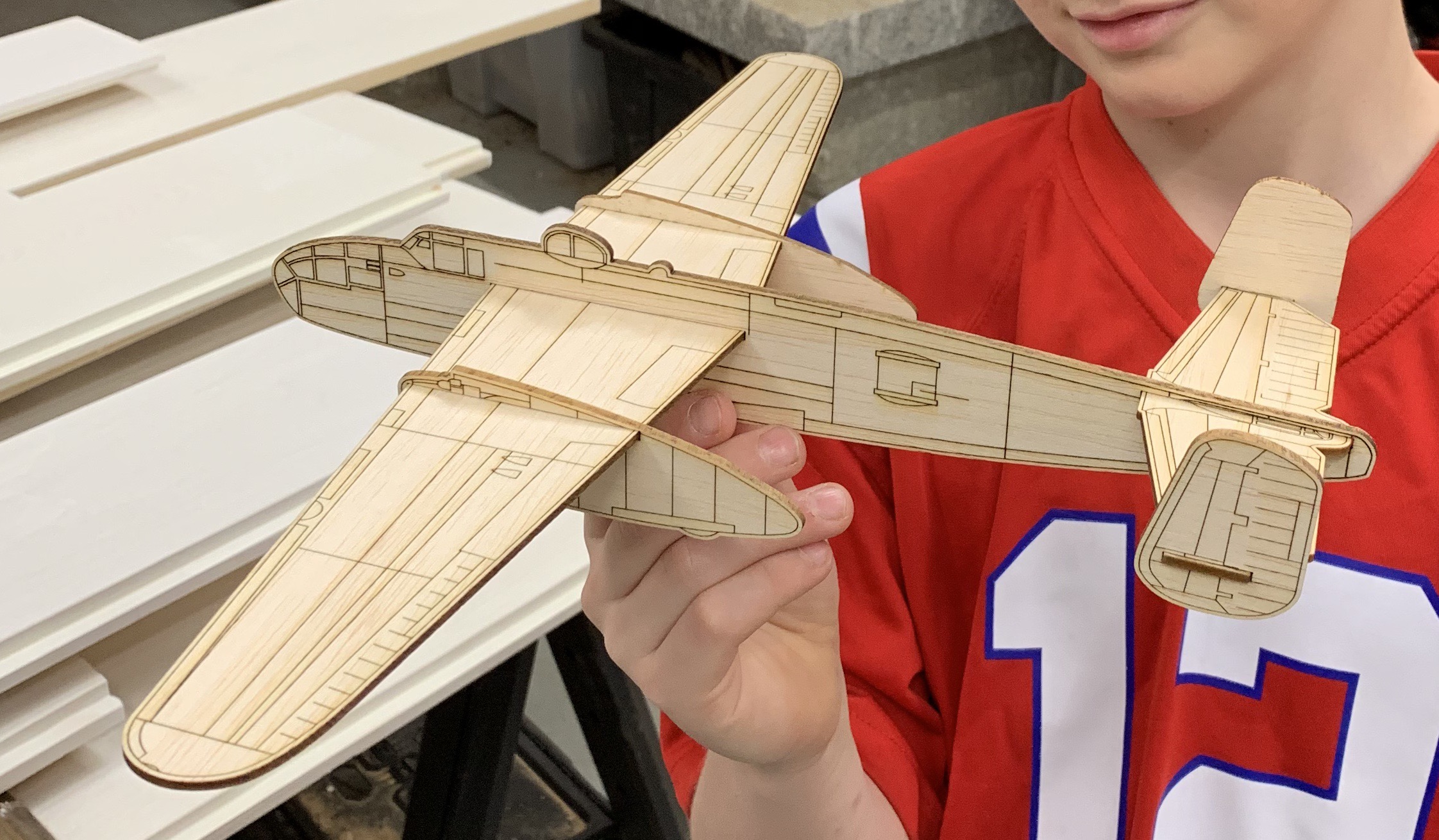 This is brilliant. The plane is beautiful. Is the other side etched?

I’ve been making my aircraft out of foam board this looks brilliant oh, I wonder if you could make them into a great Chuck glider by adding a kfm wing profile?

We did not yet try two sided scoring. We did mirror images of the engines and the rudders, so that the outboard side of each is etched. The thought on those was that it would be easy to take the parts from the first side, then flip each over into the cutout left in the main board for a second pass on the other side. So score one side of starboard engine, for example, then flip it over and put it in the port side cutout for scoring on the second side.

I think I will have to increase the speed or cut the power (down to 1) in order to do that, as there were a few spots where even at 145/2, it was burning all the way through the balsa.

On the “does she fly” question - we have not tried too hard yet, as it was raining. The engine mount (cutout where it slides over the wing) is also a weak link and may need tweaking so that flight is not a “one and done” experience

Mark, thanks for the ideas. The plan was to experiment with things that would actually fly/glide, so the idea of a more airfoil-shaped wing would be useful in that regard. It’s also tail-heavy as is, so we need some nose weight, I think. We’ll see how the 10-year-old’s interest level persists!

That puts my little basic plane to shame. Lol

Nice model. it needs a clear acrylic stand so it could look like it is airborne.

Nice that they have those files available. Looks awesome!

Here is an SVG file with the work we did. Basically took the file on the wikipedia page and cut it up into parts, each part has scores for the artwork and then a cut layer that is a little oversized. If you end up making one, check the positioning of the engines on the wings - it tends to break. Also might want to snug up the cutout on the tail for the rudders - they are a little loose. All was done using 3/32 balsa wood from the hardware store. The parts are grouped roughly to each go on a piece of balsa 4" wide by 18" long. Share any results!

flight is not a “one and done” experience

As a kid I once affixed a row of bottle rockets down the wings of a cheap balsa glider. The launch, flight, and explosive finale were spectacular!

Shoot, I apparently missed that adventure!

So, I light off the rocket engine, the truck goes zooming down the street, and then stops, a few dramatic seconds of quiet fuse burning, and finally - BOOOM!!! This was quickly followed by all the neighbors opening their windows and asking what had happened, to which we shrugged our shoulders and claimed ignorance!

Below, see image of the “runway” from Google street view. 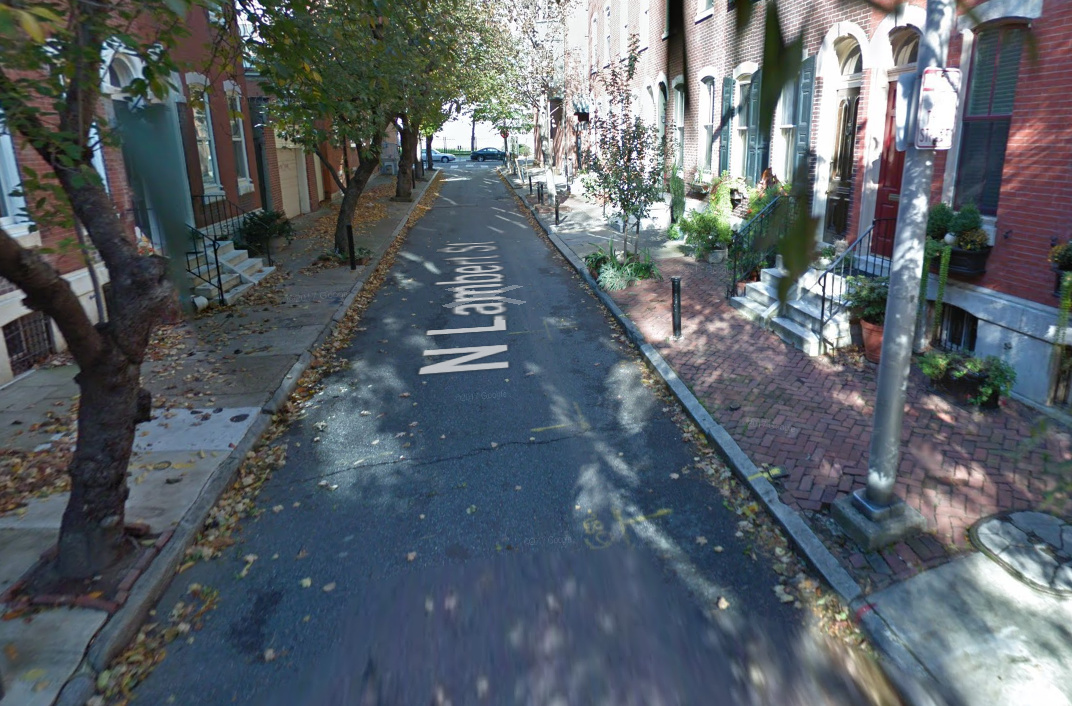 We made a few of these and tweaked a few things. Angled the horizontal stabilizer down a few degrees since it was way up and made the airplane nose dive. Also moved the engines up a little so they have more material and won’t break as easy. Scored way lighter since some of the scoring was burning most of the way through and weakening the wood. Also fit it on 3" wide since that is readily available. It needs about the weight of a quarter on the nose to fly well.

Do you have the modified file? And what did you use for score settings?

Here is the updated file. 3/32" balsa cut at 245/50 and score at 300/1. The score is very light with fine lines. I might try 500/2 or something to create a slightly heavier line but not burn through as much. When the laser is cutting with the grain it tends to go deeper and the balsa will break easily on those lines if bent.

As a model rocketeer who was around when we had to fight tooth and nail to keep the Bureau of Alcohol Tobacco and Firearms (and now Explosives) from taking away all our fun, I can can say from experience that it’s people doing things like what you just did that give fun-loving hobbyists like me a bad name. That was dangerous, and I wish you hadn’t done it. Just imagine what would have happened if that had NOT gone according to plan.

Smoke Walker - agreed, it was foolish. I was about 12 or 13 years old, so this would have been around 1985. Sorry to have tarnished the good name of others in the rocket community!