This is a very simple dispenser for AA batteries. It can hold 16 batteries, split between dead and charged. This was a pretty quick project and isn’t perfect, but I’ll share it here in case anyone else finds it useful. 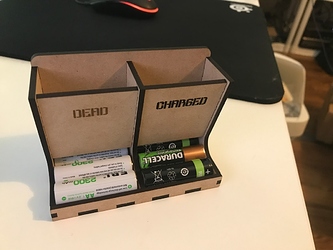 The source and cut files are available on GitHub.

Oh thank you! I could really use something like this!

Thank you! That will come in handy me as well!

Thank you very much! My brother would love one of these.

This is great – thanks for sharing the files. I needed a place for my freebie HF batteries and liked your design as it keeps the CG low (I’ll be a lot less likely to knock this one over

). I had a some scrap d-board from another project, so whipped this version out. Press fit was spot-on! 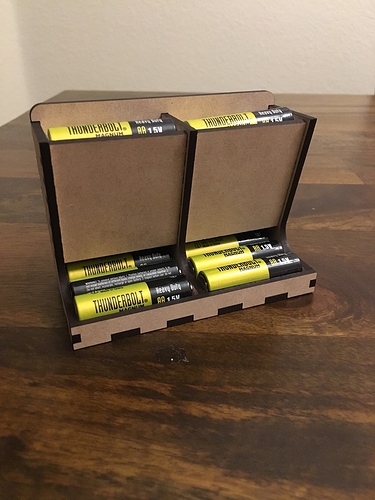 Just curious, @mark - is this the title that you wanted for the thread?

It was not. That’s super weird. I have no idea how that happened. Thanks for pointing it out.

You have no idea how happy it makes me to see someone else print a design I made. Thanks for sharing and I’m glad it worked out!

Also, thanks! I felt pretty clever when I designed that center section.

I have mine cut.

Looking at the F360 file is the treasure in this one for me. So nicely done. It looks like you were going for full parametric and some little thing is not right? Most every line and extrusion is a multiple or quotient of battery length or diameter. I will be studying on this for some time like a Rosetta stone.

I’ll get right on printing one for us … just as soon as our Pro comes!

You have no idea how happy it makes me to see someone else print a design I made. Thanks for sharing and I’m glad it worked out!

Most of the designs I make start out with the intention of being fully parametric, this one included. Then somewhere along the way I get lazy and start on the “that looks about right” school of design.

I was primarily interested in using the diameter and length to make sure that I had the base of the dispenser appropriately scaled.

In this one, you’ll notice some oddities. The first one I made was only half as tall because I wasn’t really thinking clearly about how much volume was available in the hopper. I got a little lazy when I went to extend it and wound up just doubling the ramp faces and manually extending the back and sides to match.

Something like this is one of my first planned projects. We own a vacation rental home and the housekeeping company just keeps a few packs of laundry soap in a zip lock bag on top of the washer. So I’m planning on doing this same thing but to hold soap packets.

The one thing I’d do differently, and may someday get around to, is to make the base at the bottom angled forward at least a few degrees. As it is right now you sometimes have to shake it a little bit to get the batteries to get them to move forward so that you can grab them.

I had trouble opening the SVG file with my older copy of Illustrator (CS5). Maybe newer versions are better able to deal with it, but I got “The operation cannot complete because of an unknown error” message when I tried to open it directly.

So I opened the SVG in a text editor (TextWrangler) and changed the font designation from Tough Guy Stencil to MyriadPro-Regular. Then the file opened fine. Thought this might help someone else in a similar situation.

Thanks for the heads up! I’ll go ahead and upload another copy of it without the text to that folder as well just in case anyone else has issues.

I made one too! I used “Used” and “New” because we have a bunch of partially used batteries that are not good enough for the guitar pickup but fine for calculators and such. Now I would just like to figure out how to extend the top and sides to make it somewhat taller; we’ve got a bunch of batteries! Wonder if it would be easier to do in Illustrator? 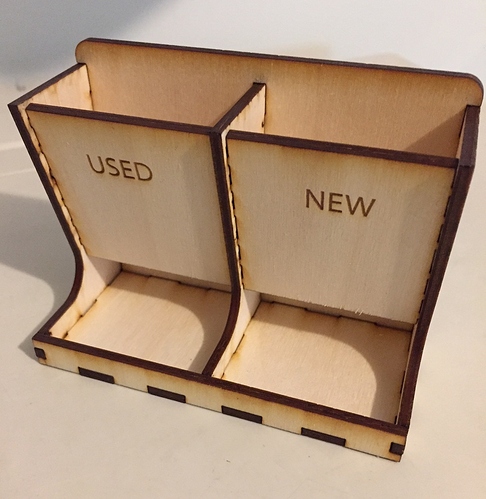 How many batteries are you thinking? No promises but I might make some tweaks to it soonish and it wouldn’t be hard to consider an embiggened version when I do that.

I had been needing to work out the dimensions for hanging stuff on the slat wall without having to buy more hardware.

This was quick and dirty but I have the dimensions now so I can integrate a hanger into new designs. 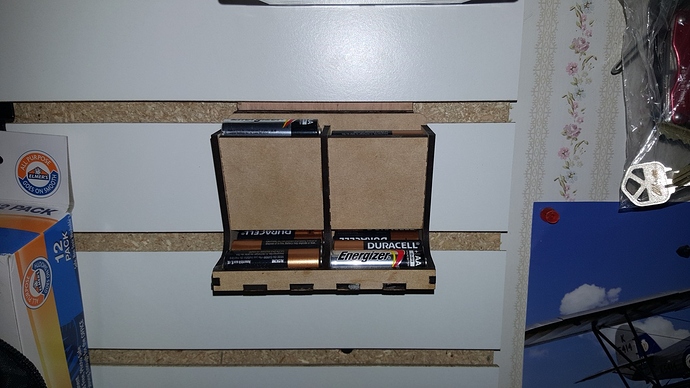 Well since you ask…I get the 48-pack at Sams Club! A larger tower would be awesome!