I sure as heck don’t have @takitus’s knack for this, but I wanted to fiddle around with some 3D engraving on a file that he sent along, so I messed with it today. 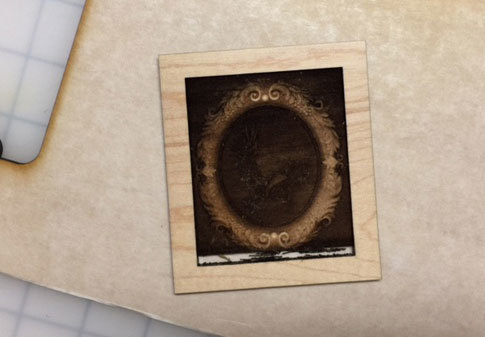 And I messed with it. 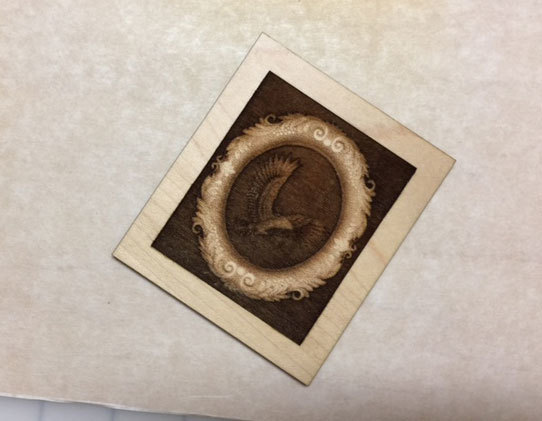 And messed with it some more, because once you start in on it, you just can’t seem to quit. 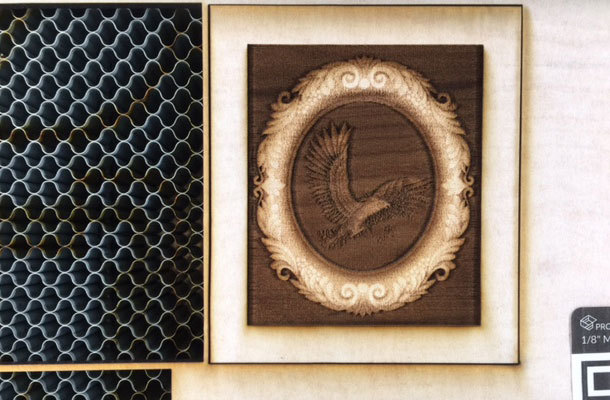 Eventually, I gave up on trying to print the thing as it was…It occurred to me that the 3D engraving settings are going to be able to give a deeper engrave in thicker (like 1/4 inch thick) hardwood.

There just wasn’t enough working room for the eagle to engrave properly, but the shading on the frame was working out okay, so I modified the file and got something workable. 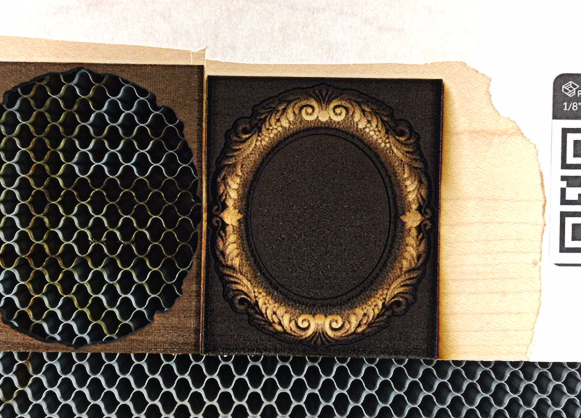 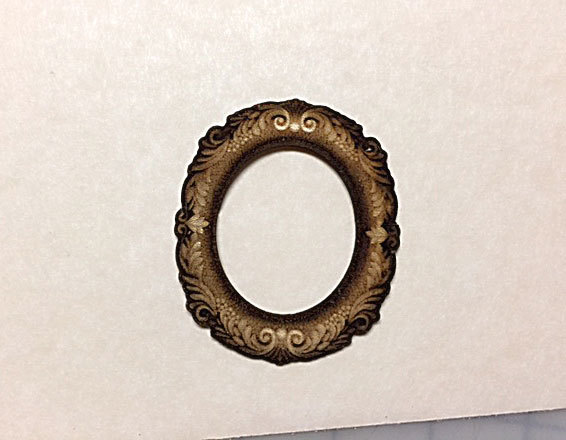 So it looks like the 3D engraving is working, even without me having the correct materials on hand, and without having to make any adjustments to the settings in the GF interface. I just told it to engrave and it did its thing. (Have since learned they are still working on it so it’s not done yet. Still pretty cool!)

The differences in brightness are from testing out the dark engrave versus the 3rd engrave setting. With something this shallow, the dark engrave gave more 3D definition, but it darkened a lot of the areas that would normally have printed lighter in something that gave the depth of the engrave enough room to work. And the final item was so thin that it snapped right after I took the last picture. (Need to use thicker wood.)

Removing the mask before 3D engraving is a good idea. The adhesive and/or burned paper tends to gunk up the details on really tiny deep areas, making things look fuzzy. And it’s hard to clean out.

And if you do a double engrave at the darkest setting on 1/8 inch maple, you will burn all the way through the wood. (First picture.)

I killed the print by lifting the lid for a moment. Works.

Another thing I was testing was the placement. Look how closely placed those cuts are in the waste material. I measured one leftover remnant between the edges of the cuts - 0.3 mm. Very sweet!

Anyway, I’ll probably leave the 3D engravings to the expert (@takitus ) until I can get some thicker hardwood in here to test it on.

And I hate to get all cheerleadery again, but I actually cried when it started engraving this afternoon, and that shape first started to appear.

It was just an overwhelming thing to watch.

You go girl! @takitus just has more practice. You’ll get there I’m sure. Even the failures look great.

but I actually cried when it started engraving this afternoon

that’s wonderful - I hate to sound sexist, but sometimes I feel really sorry for men b/c they don’t seem to be able to cry as easily. Nothing feels as good as a good cry - overjoyed, angry, sad, laughing hysterically…

I’m THRILLED that GF brought you to happy tears!

I hate to sound sexist, but sometimes I feel really sorry for men b/c they don’t seem to be able to cry as easily.

You must not know any real men. I cry all the time. Mostly pride in one of my kids,

Sometimes super-stupid stuff like TV shows. But usually it’s still something about kids, just on the show.

I cried watching an episode of Downton Abbey tonight. Don’t tell anyone, internet!

Sometimes a Pixar movie can catch me just right…

My allergies were kicking in after the first 8 minutes of Up. Best short love story ever.

Is that what you guys call it? (Was a good movie!)

I cried when Ol’ Yeller died and I did shed a few tears when I made the thank you plaque for the Glowforge team, which I have since callously cannibalized for several projects.

Nice engrave and some good things to think of.

Well to continue the sub off topic of the thread…

When Red gets released from jail in Shawshank Redemption, then kills himself. Everytime damn time…

What is the size of that engraving?

actually cried when it started engraving this afternoon,

What?? There’s no crying in lasering…
Lol. Looking really cool. And yeah a thicker wood is probably needed.

Sometimes a Pixar movie can catch me just right…

Those first 8 minutes of Up?! Seriously, Pixar, why would you do that to us?!

My allergies were kicking in after the first 8 minutes of Up. Best short love story ever.

Exactly. It’s really amazing what they did there. There wasn’t even dialog! And yet it told an entire life/love story. Genius.

When Red gets released from jail in Shawshank Redemption, then kills himself. Everytime damn time…

That wasn’t Red. That was Brooks.

One line in a movie that ALWAYS gets me is when Forrest says “He’s so smart, Jenny.” Hell, I’m choked up just thinking about it.

I thought 3D engraving, as shown in Dec, hasn’t been rolled out yet to pre-release users. Has that changed?

What is the size of that engraving?

I thought 3D engraving, as shown in Dec, hasn’t been rolled out yet to pre-release users. Has that changed?

What do you think the “3D Engraving” means?

I’m not trying to be a smart ass, but there is some confusion over the definition of 3D engraving, and whether it applies to cutting or sculpting an image out of wood and making certain engraved areas deeper than others, or whether it applies to being able to engrave evenly over a curved surface like a laptop.

The former does appear to be working…that is what I just demonstrated. (And I didn’t do anything to cause that to happen except load up an appropriate grayscale file.) No idea about the latter, because I have no intention of ever cutting up a laptop with this thing.

(And it’s five thirty in the morning here…I’m only up answering questions because the effing alarm here went off about an hour ago…it has decided it needs a new battery…and i am as mad as a wet hornet over it.)

What do you think the “3D Engraving” means?

Engraving to a depth determined by a grey scale as demonstrated by @dan in the December update.

We use the tight integration between the cloud service, the motion system, the power supply, and the laser itself to create complex, multi-pass, multi-focused engravings. Here’s one example, in maple hardwood that measures a full 0.5" thick.

Is that rolled out yet, or a lesser version?

Hope you got back to sleep by now and answer next day.

No, I’m still up…too exhausted and mad to consider going back to sleep now.

Yeah, the grayscale engrave part is working. I can’t do a full test on really deep stuff yet because I don’t have any material on hand that is deep enough.

Trying to do a second engrave on what I have here was eating all the way through and ruining the wood.