Here it is! Another Beta Design Catalog project! And wouldn’t you know it… it’s another game!

There isn’t much room for customizing this one, so I just printed it as-is and it came out great!

This is 1/8" cherry hardwood. I could flip the tile over and engrave the lid I suppose… but I didn’t really think about it. Now that I do think about it, that would make a cool kid’s party favor. Have the boards pre-cut (engraving the spaces takes a fair amount of time), and then have each kid draw a picture to then engrave on the lid. 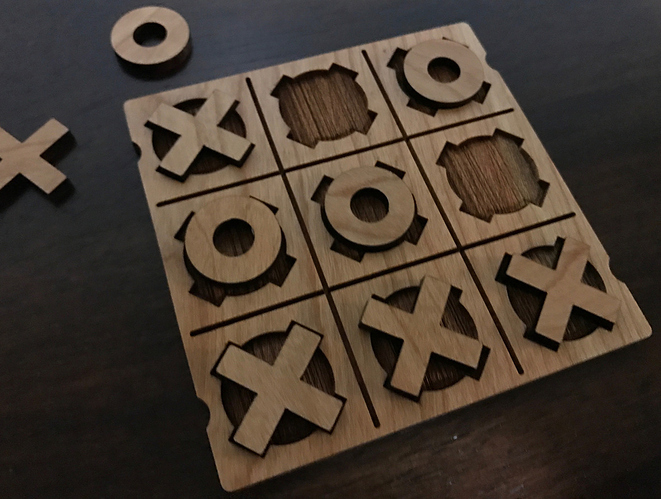 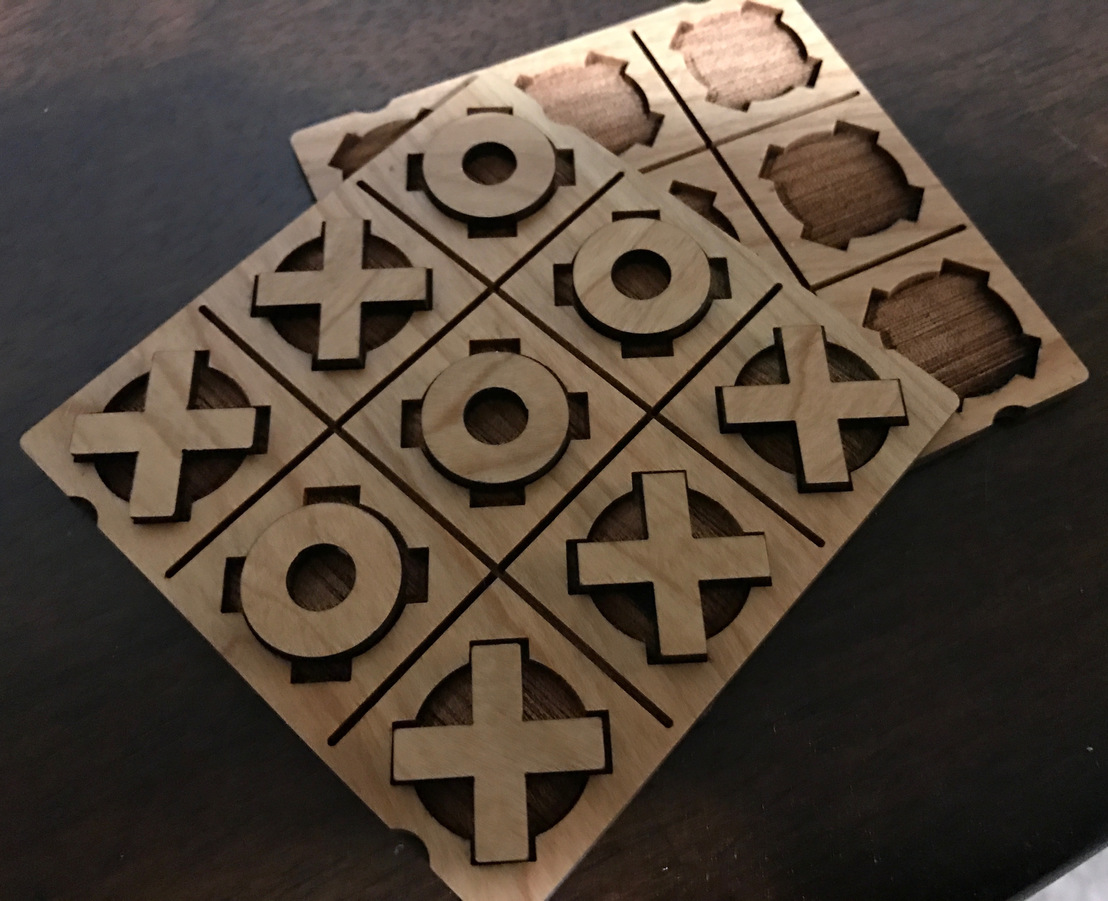 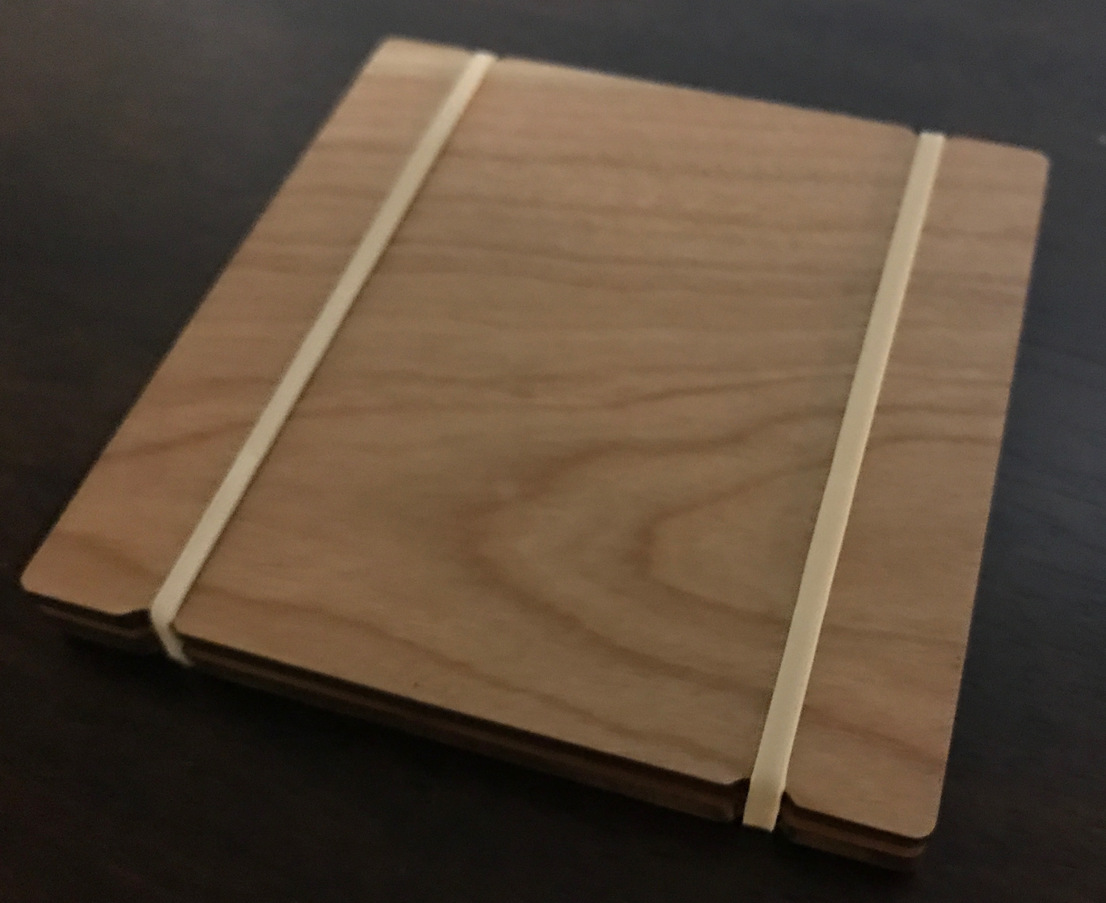 That’s awesome! Yes, the print’s a little slower because of the big engraving area.

I actually paid for one of those that wasn’t that nice.

Nice design.
I’m assuming you have five of each piece, so where do you store the extra one?

How cute is that!?! I’m not getting a sense of scale though, is it about the size of a coaster, or a bit larger?

Sweet I’m trying to teach my computer how to play tic-tack-toe, it didn’t fair to well at other games.

Awesome and pretty design! Thank you.

Nice. it’s simple projects like this that I’ll probably start with. Getting a few finished items onto shelf right away will get me jazzed up for the weird stuff.

I could flip the tile over and engrave the lid I suppose… but I didn’t really think about it. Now that I do think about it, that would make a cool kid’s party favor. Have the boards pre-cut (engraving the spaces takes a fair amount of time),

Or make it out of 2 layers of ply (or wood). Cut the shape recesses instead of engraving them. Glue that layer to another solid layer. Would be much faster than doing all that engraving. You can then do the flip over for engraving the kids’ designs on the solid layer.

Yeah, I was thinking about suggesting using two layers so you could do a cut instead of an engrave. I was thinking about someone who wanted to make 10 or 20 of them. Each person would have do decide if the cost of the extra material was worth the time savings. I think it would be worth it in some situations but not in others.

Not a bad option… but in that case the thickness of the boards has now bumped from 1/8" to 1/4", and the playing pieces have to be 1/4" as well… they don’t have to be, but it would be a pain trying to “pick” the pieces out of the recesses if they weren’t. And right now the final piece is a little thicker than 1/4", but if we did the layering, the final piece would be 1/2" thick. I took the long way 'round, but the point is that it just becomes bulkier to do that, and requires more work what with the gluing and all.

So clever manipulation of space and material. I so enjoy watching designs like this spring up. It helps me think of alternatives that are easily done on the laser!

After making the picture frame, I’d say this would definitely be worth the extra material; it took about 20 minutes to carve out (engrave) the picture slot area.

So, time + wear & tear on the forge / tube would definitely be worth it (for me)…

And by the way, any wood workers with a decent re-saw(er) and a power planer will have access to much cheaper sources…not to take business away from GF when I write that (sorry!), but anyone who works a lot with wood already knows this anyway…

But you can get 1/16" stock (not Proofgrade though) that together will be 1/8". If you’re doing a party’s worth the engrave time will far outweigh the glue time. I’ve suffered through some really long engrave times over the past so I’m sensitive to finding ways to speed them - cuts and grouping engraves so as to break up the travel path instead of getting a single long back & forth going on.

Whatever works is good though

I’d love 1/16" stock… and I will certainly pick some up once I get my forever Forge.

FWIW if you did the multiple-layer version you could almost certainly find uses for the waste bits down the road. Maybe contrast for the bottom layer.

That shape would make a decent token for a board game, or a little family crest or something.