Next up… stacking boxes.
I wanted to make these as storage for my wife who has never met a writing implement she does not like. I only made two for now, but eventually will make more.

The goal was to make several shallow boxes that would each hold a reasonable handful of items, would stack on top of each other and ,most importantly, would be “roundy rectangles”.
They also had to be cuttable from one sheet of the ⅛” thick acrylic I have.

The size was a fairly big constraint, since I wanted the boxes to be 6” long and 2-½” wide. While the average size of an adult unsharpened pencil is 7.5”, I was just looking to fit smaller pens and mechanical pencils. The plastic I have is about 19” X 8”, so I could not make the sides as one long strip with hinges. Instead I went with two separate almost symmetrical sides, a bottom piece that fits inside, and a small “lip” that encircles the top. There are 4 half round feet that also act as tabs to keep the boxes together when they are stacked up. 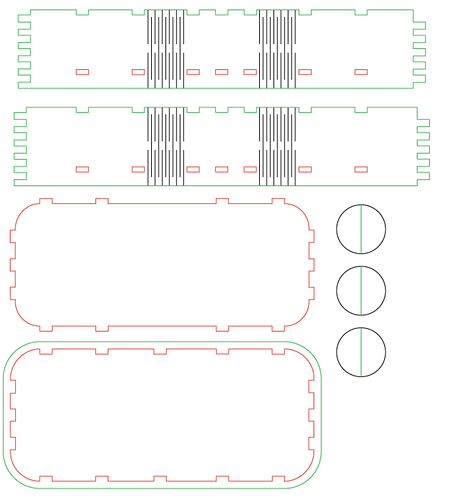 stackers.png961×1040 65.7 KB
Let me just say, that what you see there is the result of many iterations, first in cardboard and then in plastic.

I have not made living hinges before, and I spent some time reading this amazing write-up

The last set of hinge tests that I showed used a cut out a rectangle of material to form the links. By re-arranging a formula that calculates the required inter-link clearance, it's possible to find the minimum number of links to make a bend using...


It seems I was pushing the envelope for acrylic (and wood as I later discovered) by trying to get such short 90 degree bends. It works, but I had to do quite a bit of experimenting to find a hinge configuration that did not just snap. Acrylic is a very unforgiving material (at least when cold), push it just a hair too far and crack, that hinge is gone.

They turned out pretty well I think, although my plastic craft still needs a lot of refinement (like not getting solvent all over the surface). I also need a better way to make the stacking thing work. The round feet under them that are supposed to fit inside the next one down are OK, but the insertion force required is a bit nerve wracking. A little more engineering might help there. 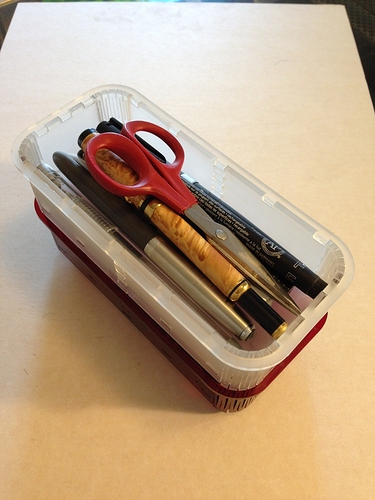 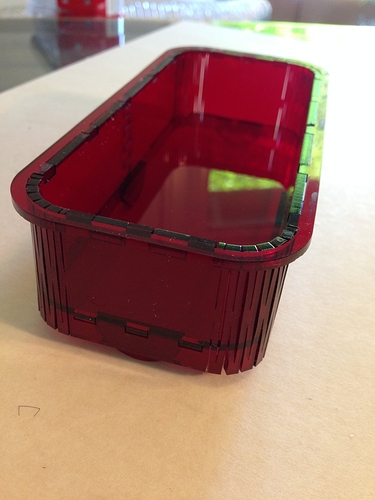 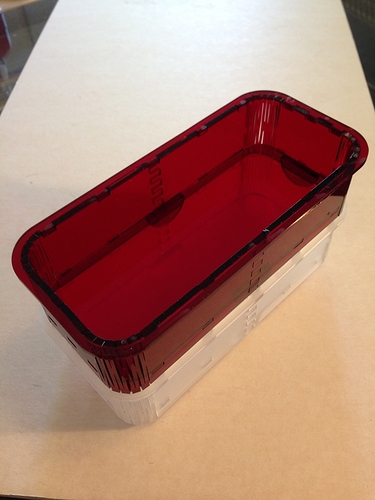 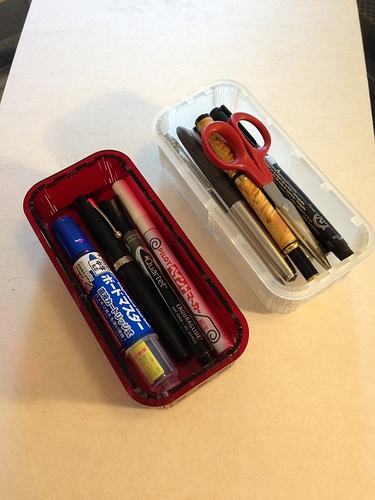 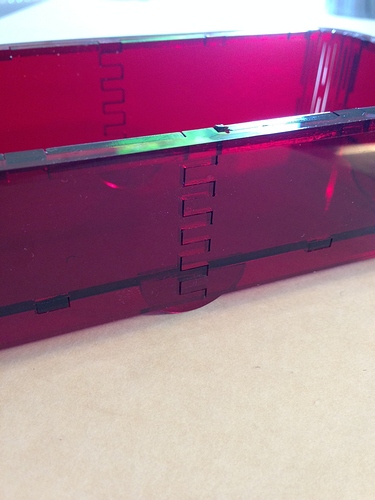 Finally I thought it would very pretty to have a wooden one that I could mix in, but the wood spirits were not with me. The thin maple I tried simple falls apart when the hinge is so small and the cuts are so close together. I think maybe ⅛” plywood might survive, but I don’t have any to test with. 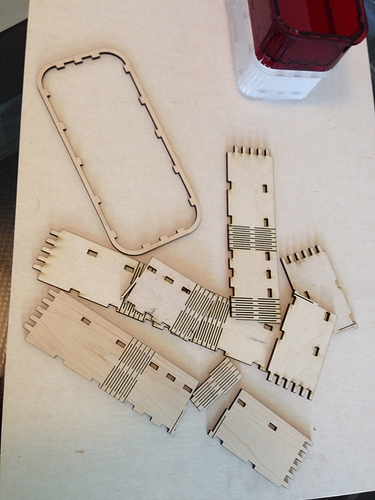 It would have been a lot easier had I scaled them up by 10-15%, so I may try some larger ones at some point.

It’s all about pushing the limits and pursuing. Thank you do much for the inside track. Awesome

I REALLY like how you did the top lip of the bins. It has inspired

me in one of my designs!

Thank you for taking the time for failing for us. Keep it up! @dan or anyone with living hinge experience, would the ply wood make a better hinge, or is his hinge just not designed right?

Keep up the awesome work! Love the lip and finger joint solution.

I also haven’t played with living hinges much, but so far have a strong assumption that different materials require different layouts. Thicker cross-connects, or thinner segments. Those kind of adjustments. We made quite a few boxes about the same dimensions (but half as long to be nearly square), and they came out great in plywood or cardboard, but were disaster in acrylic.

Would the acrylic living hinge be “stonger” during the initial bend if the tape were kept on or would it not make a difference. ( If your living hinge breaks is it no longer living

The process cuts all the way through, so the tape does not really make a difference.

@jacobturner That link I included is a VERY complete engineering analysis of the stresses in a (simple) living hinge. He comes up with a formula to determine the minimum number of segments you can get away with for a given internal radius.

but doesn’t it snap on/across the uncut areas? Like when using a saw on acryllic, if you tape over the cut line it helps prevent chipping/cracks - or like some woods to prevent chipping. Obviously the laser wouldn’t cause that, but i’m refering to the tape that is still on the acryllic helping to “strengthen”? it

What?! I didn’t even know a living hinge could be used in acrylic. Boy, oh boy! Another great project to share. Thanks Josh!!

that is amazing. Living hinges in Acrylic opens so many ideas…really nice work.

really a great project, and explanation of the project.
One thing you may try on thin woods, it might help to lay a warm damp cloth or paper towel over the hinge part for a few minutes to soften the wood before bending.

If the paper towel doesn’t work you could always try steaming it. If that doesn’t work, there’s always Ammonia Gas

storage for my wife who has never met a writing implement she does not like.

It depends a lot on the type of material and the size of the cuts. If the material had smaller verticle cuts, it would be stronger, and have more “spring” in the bend. I have ran some baltic birch plywood that appearantly had some ‘voids’ or gaps where the inner layer didn’t have material and the hinge just shreds when flexed. So, make sure your material has a solid core!

Love being able to peek in on the trial and error process of the project. Great storage idea!

…the average size of an adult unsharpened pencil is 7.5”…

And this quote just tickled me.

I agree with the wet towel idea for the wood, if not a steam treatment. For the acrylic hinges, especially when they will not need to be flexed repeatedly, I am thinking that the judicious use of a heat gun during the initial bend would relieve a lot of the stress in the curve too.