Last week I was watering some plants and noticed some bud stalks growing out of a couple of huge aloe plants. I never really thought about it before but I didn’t know they bloomed. 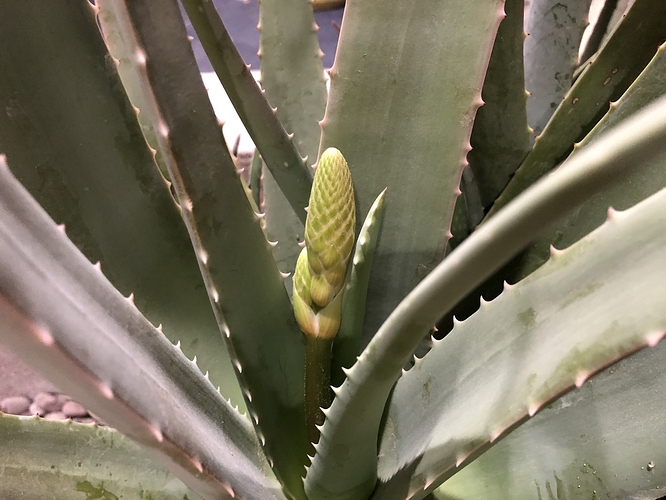 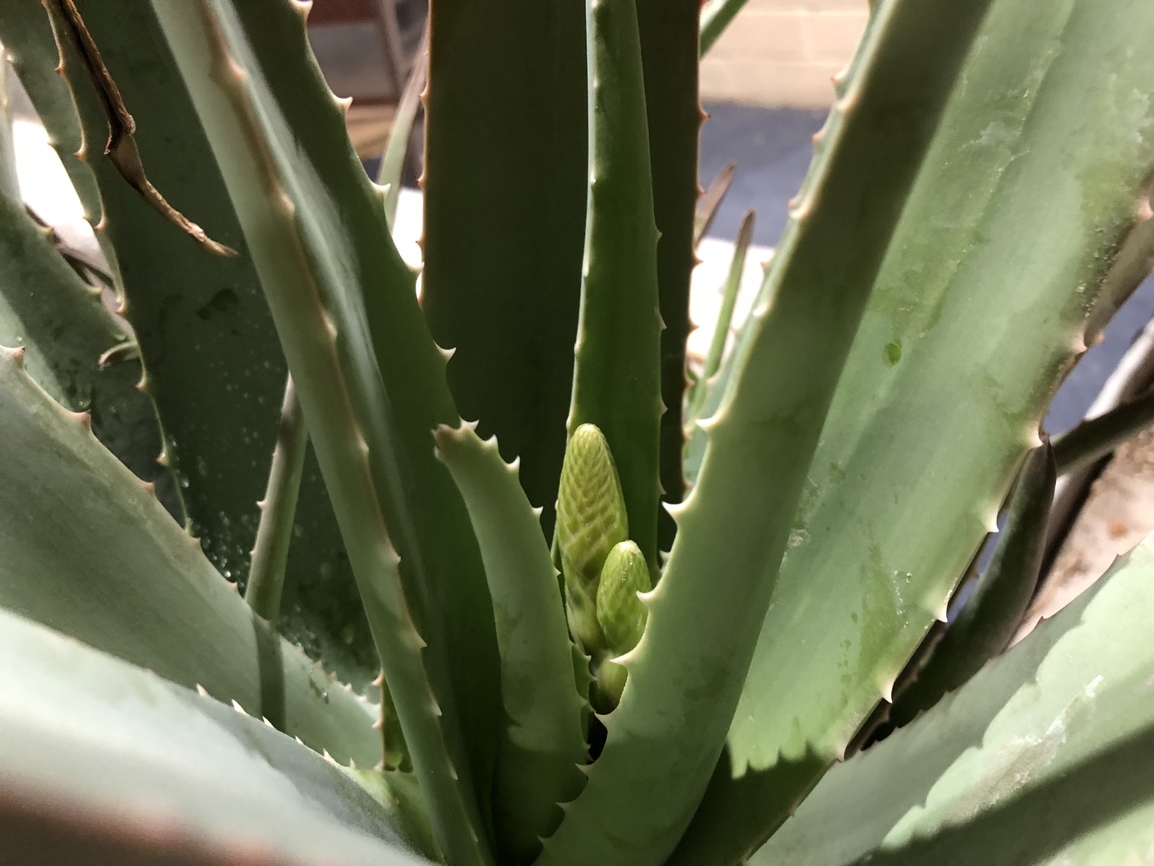 Today the stalk on the left is almost as long as my arm and has two buds forming. The one on the right is shorter with three buds. 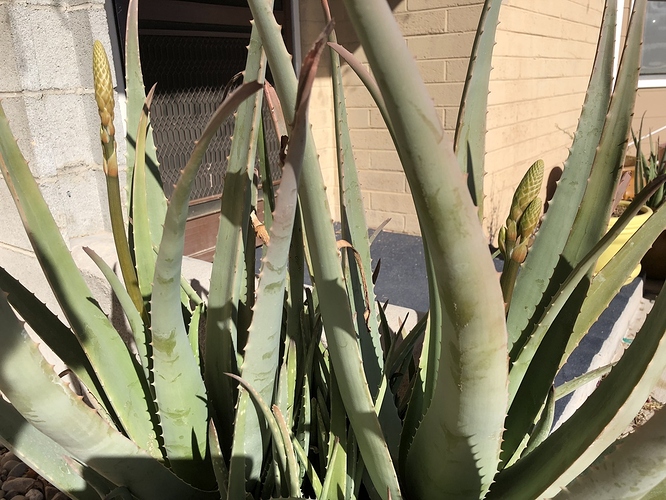 Your aloe are clearly happy! I love aloe blossoms. Quite beautiful.

I won’t spoil it for you.

I bought them about a year ago for $10 from somebody selling a bunch of stuff in an empty lot. They were in a cracked foam pot with no dirt and they were in great shape. I asked him how he cared for them and he said he just watered them every day. Since all the dirt had long ago washed out of the pot it seemed to be a good middle ground.

I cut off all the pups and now have about 15 others going. A few are getting quite large already. In the mean time there’s a whole new batch of pups in the pot and I’m not sure if I can get in there and get them out with the narrow opening. In any case I’ll wait until after the bloom.

The leaves are very plump and full of water. Sometimes they get watered a couple of times a week and sometimes it might be weeks between waterings. I still need to get my irrigation setup for the pots in front of the house. I have a four zone controller for them so I can adjust the schedules for the different types of plants. One of these days I’ll check that project off the list.

Mine totally pupped out to the point where I now have an entire border of aloe down one side of the house! Fantastic plants.

So prolific, in fact, that you can often find new varieties on folk’s street side compost piles. Many of my plants started as yard waste!

They store water. You don’t really need to water that often at all! I’m in a dry climate and oft don’t water mine but once every 6-8 weeks during the dry months. 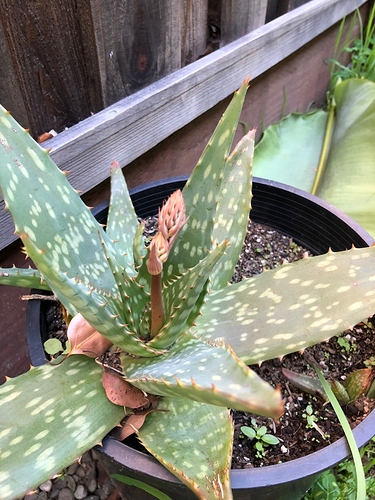 Nice! That’s a different variety of aloe than mine. It will be interesting to see how the blooms compare.

I know they don’t need a ton of water and that’s why they are doing so well. I sometimes forget to pull out the hose so they get good and dry. I live in Las Vegas so it will all too soon be 115 with 10% humidity.

There are dozens of species of aloes and most of them have spectacular flowers, usually red or orange. (But some are yellow or pink, or even a mix of colors.)

Here are some photos I’ve taken of aloes at the Los Angeles County Arboretum: 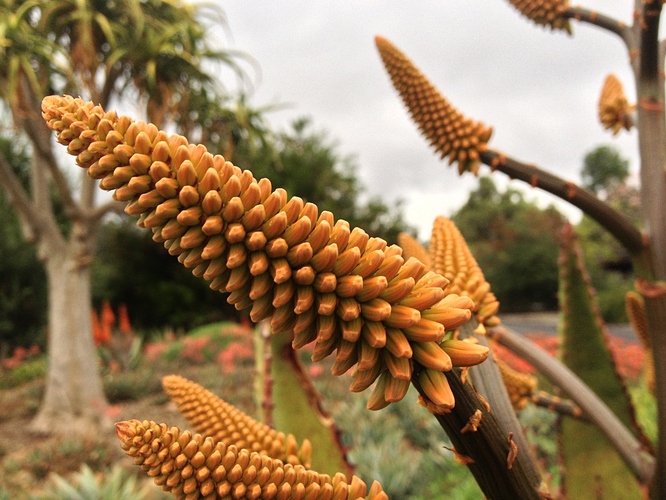 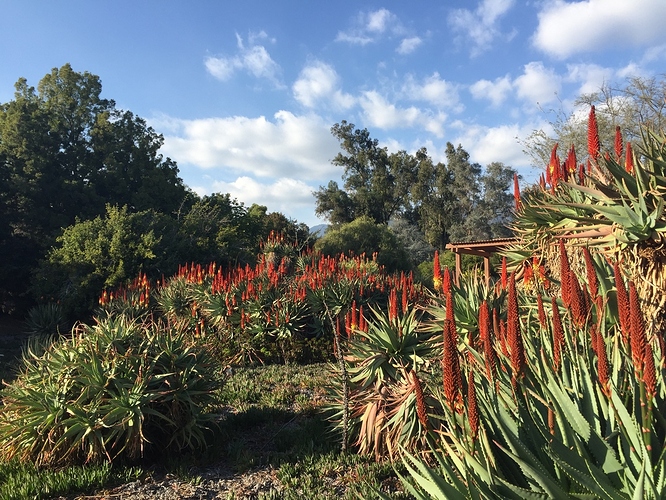 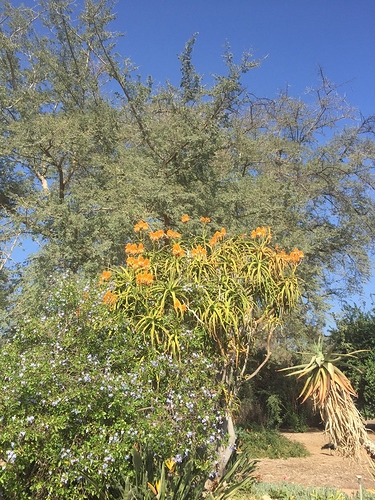 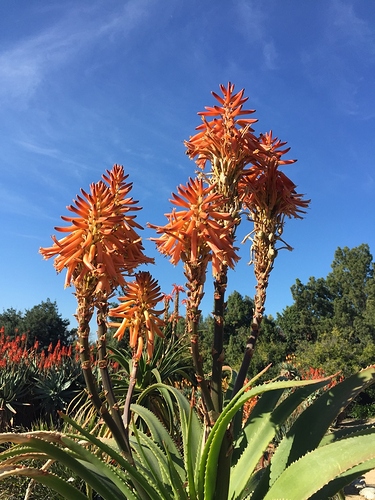 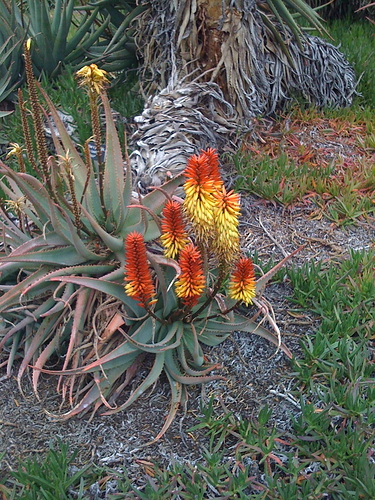 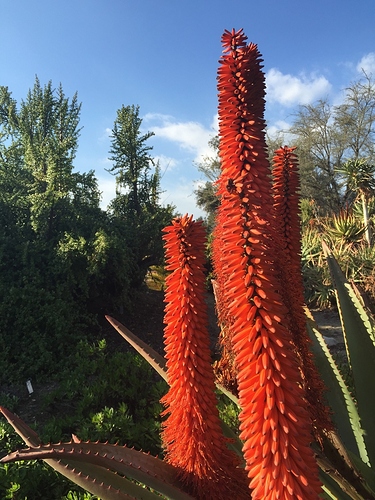 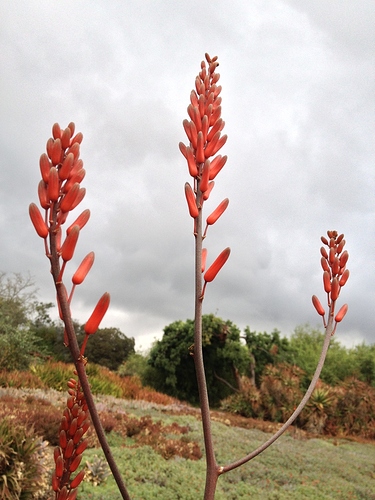 Those are really nice! We had a huge one that got all but killed off by the cold this winter. Couple of leaves at the very bottom survived…it will be back.

If you expect a cold snap and it is otherwise relatively dry, douse the plant with the garden hose right before you go to bed. All that water vapor right around the plant will prevent frost damage quite a bit.

Not effective if you’re looking at a hard freeze, but works great in relatively arid areas that occasionally dip into the 20s (like the South Bay of the SF area).

There are dozens of species of aloes and most of them have spectacular flowers, usually red or orange. (But some are yellow or pink, or even a mix of colors.)

Nice selection. The third one was unexpected. I didn’t know the grew like that. Or is it some sort of botanical Frankenstein?

I have no idea what variety this one is. The flower will be a fun surprise. Since the leaves are over two feet long I’m expecting something grand.

Nice selection. The third one was unexpected. I didn’t know the grew like that. Or is it some sort of botanical Frankenstein?

There are over 500 species of Aloe. Some of them are almost tree-like. There’s quite a lot of variety in that genus.