Brand new Glowforge not cutting through on the right side

I have a new Glowforge Pro and set it up a few days ago. The material is not being cut all the way through on the right side. It cuts perfectly fine on the left side but nothing on the right. I am using the gift of good measure project on both sides with proofgrade material and proofgrade settings. We have also made sure that our unit is perfectly level. From what I have seen, this is a common problem and I will need a replacement. I was wondering if anyone else had any tips or tricks I could try? TIA

Send pics of your cut attempts along with when they were printed to support via email, and pack it up to be sent back for replacement.

It isn’t common. There’s something like 100,000 machines out there. Shipping mishandling can cause mis-alignment of the optics.

Ok, thank you. I was just going off of what I saw in the Glowforge Facebook groups. There was a list of folks just in that group that have had the same issue. I also left a message for a call back but I will try emailing. Thank you!

Did you get a response from Glowforge on this issue? Just received my unit yesterday and it is the exact same problem… So it sounds like this is a common issue to me as well.

All machines are tested before being shipped. What happens in shipping is beyond their control.

Well I am hoping it is something they will resolve for me but I am getting no response to my emails or phone calls so far… so needless to say I am getting a little concerned. Lot of money spent.

Yes, they are sending me a new one. Since they dont have live support chat anymore I went through the sales chat. When it pops up it will say something about purchasing or already own one. Then she replied about calling/emailing support and then there was another reply saying “did this answer your question” or something like that and I clicked “no”… lol. So then I said I have a new machine that isnt working properly and she transferred the message to the support team and I heard back the next day. Then I just kept up with it every day. If i didnt hear back I would respond to the same thread asking “any updates?” All in all it took about 4 days total between sending messages back and forth. Now im waiting on a ship date for the new one. Hope this helps!

Wow, I got mine a, GF PRO, on January 17th and I have exactly the same issue, right out of the box it didn’t cut on the right side, as you can see in the picture. I scored stars on the paper sheet. You can note that after a certain distance, the laser does not work.

I bet the problem is that the axis that carries the head is tilted, preventing the laser to go through the window/lens when the head moves to the far-right.

Probably there is a batch of cutters with the same problem? What are the odds to have exactly the same issue?

I already asked support, they say they’ll send a refurbished one… no way! I want a new GF, mine is new, it was sent defective. Good to know that they gave you a new one and not a used one. 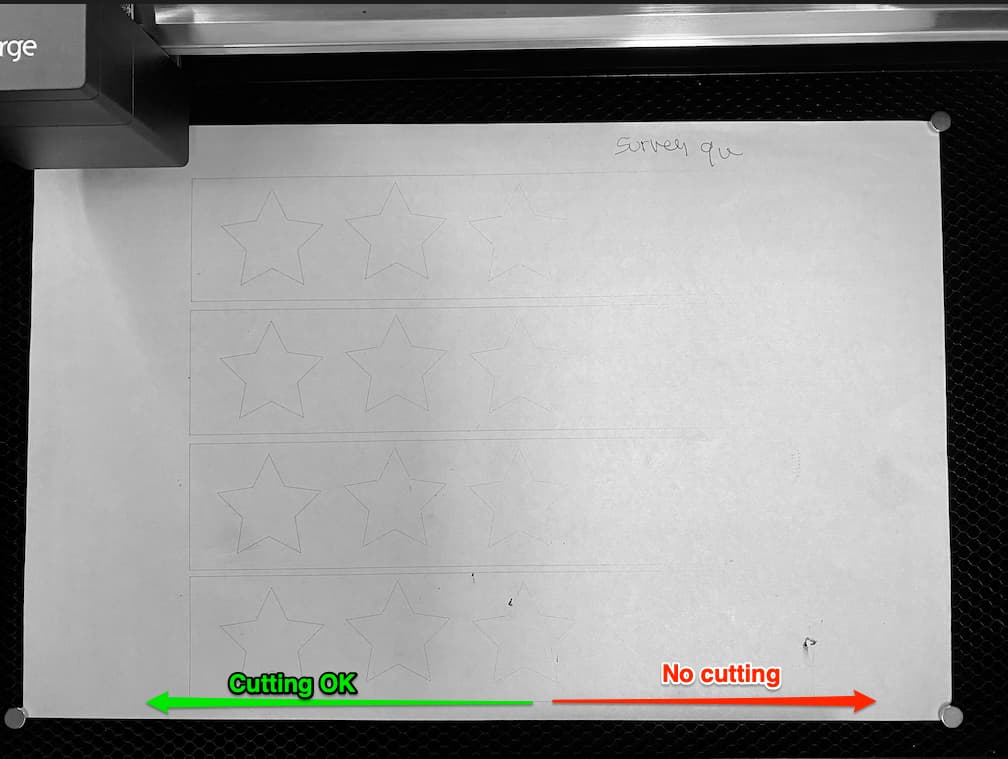 Probably there is a batch of cutters with the same problem? What are the odds to have exactly the same issue?

This problem has occurred in some percentage of units for many years. It’s not a recent thing nor is it more widespread now. It’s almost surely one of the non-user-serviceable mirrors in the laser arm coming out of alignment due to rough handling during shipping. E.g. FedEx or UPS dropped the box too hard somewhere along the way.

I guess this is the kind of problem that is statistically expected and randomly distributed; I just got the winning ticket

No big deal, I’m OK with that.

My only request is to get a new unit, not a refurbished one, as mine was delivered defective.

Well I posted to this thread on Feb 16th and today is March 11th and still no new machine. I am trying to be patient but patiently losing my patience… If and when the new machine arrives if it looks too refurbished or doesn’t work I will be truly disappointed. Anyone on here have any suggestions for me to get a better response

Glowforge does not work thru this forum. You have to contact them via email or phone.

Even back when they did, you would have to had opened your own thread. They only worked with one owner per thread. They didn’t just browse the forums.

Yes I contacted them outside this forum but they are not communicating since the point of saying another machine would be sent. Should have been here or at least on the way according to that email but I can’t get any updates. Any no emails or updates saying shipped yet.

Glowforge outsources everything, and they don’t typically contact you until there is information to share. So you would not expect to receive another email until the company that refurbishes machines actually has one ready to ship out.

This kind of delay is not uncommon. There is no warehouse stacked high with machines waiting to be sold.

I would suggest picking up the next one from the depot. you might have a bumbler on your “last mile” of transit.

I picked mine up at the depot years ago.

My “depot” had it leaning against a wall on its left side. Box was damaged and missing two “handles”. I reported to GF support at the time.

I didn’t find the stains from the leaked coolant until a couple of years later when I removed the failed exhaust fan.

i was lucky I guess. my box was pristine.

Good luck, I just lost my patience (and good faith) with glowforge. Sorry guys, but I’m don’t like GF anymore.

Yes I contacted them outside this forum but they are not communicating since the point of saying another machine would be sent. Should have been here or at least on the way according to that email but I can’t get any updates. Any no emails or updates saying shipped yet.

Keep following up. You should get an email (an invoice for $0) when they order the replacement for you, and another email when it ships.