Bubbles in Tube and popping sound

The laser works/seems to be working, but today I noticed a popping sound.

There were always a few bubbles but now it looks like it’s almost boiling.
the bubbles are filled in the top.

Should I be worried? 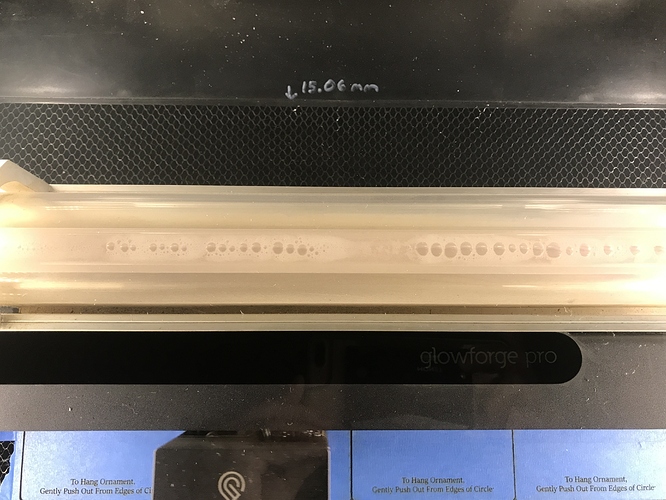 In my experience, it is not normal to have bubbles in the laser tube, unless…

Supposedly there are sensors that would keep a coolant problem from damaging the machine but I wouldn’t use it until support gets back with you.

There were bubbles since I got it from day one …but this is getting worse and worse…now there is this big one.
(picture from this morning after shutting it down last night and letting it cool)

Is it something that can be fixed do you think?

It hasn’t been moved since installation 6 months ago.

Unplug the machine, lift the lid, feel around on the bottom of the enclosure left and right sides under the bezels. If you feel anything wet, you’ve got a coolant leak. The coolant tank itself is on the left side of the machine. A leak is the only way the bubbles could be getting worse. So if you don’t feel anything wet, that’d be an argument for it having been that way all along and you’re just noticing. But either way, you’re low on coolant (which I think is mineral oil, not water, so when it leaks it doesn’t short circuit all the electronics).

It’s not wet inside. I checked that last night and this morning…is there a way to refill it or is that a GF only service? How do I stop it from losing more coolant?

To stop losing coolant, you need to figure out where it’s going.

I am sure the reservoir can be refilled by the end user. But given there’s a mystery as to why you need more coolant to begin with, I’d wait for GF support to respond with a recommendation.

That being said, the bubble doesn’t look that bad to me. If the level of the coolant was low enough that the inner laser tube was at risk of being exposed to air I’d be worried. But you’d need to lose half of what’s in the system to get that low… you would definitely notice it leaking out long before then.

I wouldn’t stop using the machine based on that image. I suspect it’s just the original fill was a little low.

Thanks!
That’s a bit of a relief that’s it’s not a total stopping point right this second (I have a lot of Christmas items I’m making!)
I’ll wait for GF to respond to see what the next step should be as far as fixing it. The bubble is much larger than originally, so I’ll keep an eye on it.

Don’t agree, but honestly can’t say that my opinion is better than @randy.cohen. It’s my belief that if air is displacing the fluid, or if it has been that way from day one, your coolant system is not functioning properly. There should not be bubbles in the tube after the initial break in period of a couple minutes. And the picture looks like mostly bubbles to me. Quite a few units had fluid leaks during the initial shipment. If that happened to yours and the fluid reservoir is very low, it’s like a fish tank motor cavitating and not properly pumping the cooling fluid through the system. Again the temperature sensors might kick in but sensors can fail too. It’s your call.

And the picture looks like mostly bubbles to me.

Look again. There is one large bubble that’s about 1/2 across and maybe 6-8 inches long. That is not going to make any difference to how well the system is working. It’s cosmetic. The pump draws from the low point in the tube and returns it to the high point in the tube, so as long as there’s enough fluid to circulate, the pump won’t run dry. And the system would have to lose about 1/2 of the fluid before the laser tube itself is exposed. Most of the glass tube is the water jacket. The laser tube itself is much smaller, and it runs down the center of the jacket…

I am pretty sure the system relies on the additional coolant in the reservoir to control tube temperature. If it’s low enough for air to be drawn in, it might limit performance/overheat sooner.

That said, it should shut down if it gets too warm, so I wouldn’t be overly concerned. The big question is what can be done. It’s not just water in there.

I know mine has run low since I’ve owned it, as I discovered a evidence of a large spill while on it’s side during shipping when I removed my broken exhaust fan a year or so ago.