Calling ALL Tennesseans! Or anyone else who would be interested!

Okay, so as most of you know… I am DYING to have a glowforge party, or date, or gathering. And I don’t want to leave anyone out that might be interested. Even if you do not live in Tennesse, you are invited. Us Tennessee folks are welcoming! Hahaha!

I started talking about finding people from Tennessee to see how close the next GF was.
To my surprise, “Troy the Maker” is right around the bend. Troy makes YouTube videos and tutorials for our beloved Glowforge. I contacted Troy and he said he is down (quote, unquote)!!
I also spoke with a couple of others that are from TN, and one person who actually does not live in TN who wants to join. So I am making this post to get some responses from people who would like to add to the fun!!

My hubby has a warehouse which he runs a couple of his businesses out of. A corner of that warehouse belongs to Yours Truly. In that corner, lies my Shapeoko XXL with the computer, 3 very large workbench tables, bandsaw, router table, miter saw, etc. There is plenty of room! In my office is where my GF lives. I have my computer and Brother Scan N Cut, and all of my supplies in here. So as you see in the images, a hang-out spot is not a problem!

So I want to know who is game to having a GF party? I live about 20 minutes from Nashville. We could plan something really cool and all hangout. I am going to have a GF party. Even if only one person comes!!! 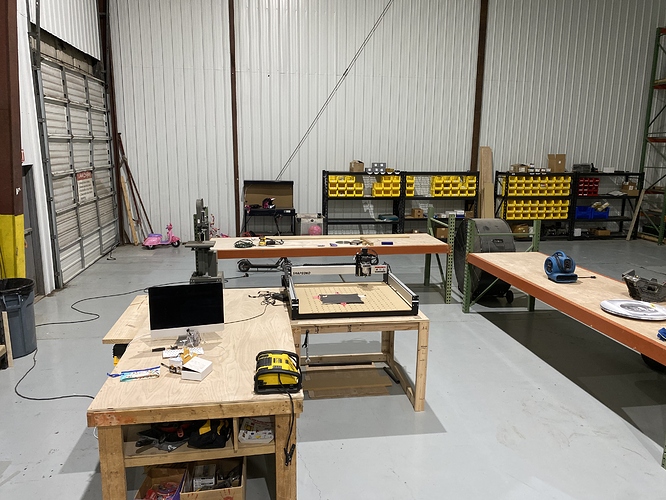 I am DYING to have a glowforge party

I mean this wording is interesting given that we’re in a legitimate global pandemic and specifically a surge in the US. As much as I’d love to do something like this it’s really bad timing to invite strangers to gather and have hours of conversation.

Holy cow! Look at the size of your “workshop”! (I’m officially green with envy!)

We’ve got warehouses too, but they’re filled with stuff…no space to speak of.

I have a very close friend in TN who has been begging me to visit (or at least was, before this stupid pandemic), so if you do it again when things settle down, I’d consider it!

We could plan something really cool and all hangout.

Some way of signing in to a video connection would be wonderful . Even without the covid issues it would be very difficult to travel but a way to connect by zoom or equal would be great!

I’m totally down with this,but after covid-19 is truly been handled.

With any luck there will be an effective vaccine by spring. If not I’ve got to continue to do just as much from a distance as possible.

But when the time comes, what a perfect venue!

Well I am hoping and PRAYING that this does not last forever. I have hope that it will all be over one day sooner than later. And I am sure that there are less than 10 people in my area. I say that because I have done nothing but screamed a “TN roll call” since I have been on this forum. From the beginning I have searched high and low for people from TN, and as I stand here today, I know of a whole FOUR people. Thats it. There has got to be more! I just have not found them yet! I have hopes that I can find all of them one day! And eventually meet most of them.

I have done NOTHING BUT social distance for 6 straight months. I am so tired of living in fear. (Please do not take that as me being rude, because I have, and still am trying to think of a different way to type that so it does not sound like I am pointing my finger at you and getting my panties in a wad. Because I have nothing but looovvveee)

I am more so wanting to find all the people that are even somewhat near me. There has to be more out there. There has to. With all of that being said, I would not want anyone to feel uncomfortable, or be pushing any limits. I definitely want it to be responsible fun. But like I said, I have searched for people on here from my area, and even people from TN for the past year. As I stand today, I have found a total of 4.

I wish that we could all get together, like we have talked about before. Our own Glowforge convention, if you will. But I have even brought that up several times, even before this pandemic crud.

To sum it up, Yes I do want to gather with my GF community. If there is more than 10 of us, it would have to be fully planned and discussed, and lots of thought and plans together. Which would take some time to do. So it obviously wouldn’t be happening immediately. Even with only 5 people, still it would need planning.

I am hoping we don’t have to live cooped up much longer. Because this past 6 months almost killed my spirit. If it ends up being only us three, then we don’t require as much planning. And we could get this on tomorrow!

And that is why I am making this post. To get an idea of what is what, and who is where, and how people would even give the idea thought.

I have hopes that all of this will be coming to an end SOON! I hope, I pray, I have my fingers crossed, I have faith.

Honestly, I don’t know how I got so blessed! Sometimes I pinch myself, and ask “is this really real?” I was so hyper about it when we put it all together that I could barely sleep at night. It was unreal to me. I went from having it in my living room to a tiny room to a whole warehouse! I was blown away. I still am. And this past 6 months when I became aware of my health issues, IT MADE ME SICK knowing that all of this sat here, just waiting to be used.

I am envious of it, too! Still!! It makes me clap my hands every time I walk through the door!

Oh, Jules, You want me to come and help you clear a corner??? You could do as the hubby did…and get massive shelves to stack stuff on!!! Because if it weren’t for him doing this, he would still have isles on this half. He added those shelve along the entire outside. Those are the new ones and don’t have much on them. But the others do. And when he needs something that he can not grab with the forklift, I lift him up while he stands on the forklift and he walks on the floor of the shelves that he installed grabs it, and hitches a ride back down!! 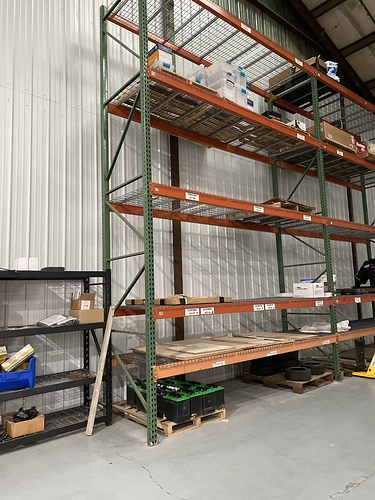 OH my… that wording does look awful. I almost want to edit it!

then your comment wouldn’t make any sense though! If it weren’t for that I would change it.

But I truly did not mean it like it sounded. I am calling a three people a party. Well, 4 with me included!

I’m totally down with this,but after covid-19 is truly been handled.

With any luck there will be an effective vaccine by spring. If not I’ve got to continue to do just as much from a distance as possible.

I share your frustration with COVID-19 isolation, but I guess I know who you are probably voting for. Follow the science—and something other than Fox News!

With 2% of the US population, you’d expect there to be about 600 owners in TN.

You want me to come and help you clear a corner???

Uhhhhm…yeah! Next Tuesday work for you?

We don’t discuss politics here because it can never end well but I can comfirm the above quote.

I’ve “fixed” my post, but IMNSHO @MANDYpalmer83’s post is unacceptable “politics” to many of us!! I have a serious allergy to cluelessness—no matter how well meaning.

@MANDYpalmer83: Given what you said I apologize for coming down so hard on you. Sorry…

@markevans36301 is right, we’re not supposed to talk about “politix” here, but COVID-19 has been a common topic here (e.g., making PPE). We even had a long contentious discussion about Black Lives Matter fundraising.

The fact that now COVID-19 ≡ politics sickens me.

I am so tired of living in fear.

I don’t want to get in a big thing about this, but I just want to clarify that we’re not all living in fear. I’ve got friends living in countries with basically no Covid and also minimal restrictions. Why? Because they shut things down right away and follow precautions when breakouts happen. I’m choosing to live in what I consider to be common sense. I’ve lost someone and watched others go through this. If I can keep others from going through what I’ve be seen, I’m OK with a bit of sacrifice.

Other people need to make their own choices, but I’m tired of the false narrative. We aren’t in this situation because of people living in fear.

It will definitely not be before Christmas. Especially if it is more than the already three people that I know of. Definitely. But DEFINATELY in the near future! My husband is definitely not a Glowforger, and it is a very talked about conversation between the two of us.

It would be a dream come true to meet even a handful of people from this forum. I am just amazed at the way that yalls mind work!! The creativity is amazing! Hell, just the conversations sometimes amaze me!

But most of all, the team like nature just grabs me by the heart! I honestly would love for this to take place in the future. I am definitely not giving up on this one!

WOW!!! 600!!! I didn’t realize that this many people now have a Glowforge! That is quite amazing! Oh MY! I definitely wouldn’t be able to host a party of 600 on my own! Ever! Lol! But like I said, there was once talk of a Convention like Glowforge event, thrown by and put together by the GF community!

I wonder… Out of all of the people that have a GF, how many actively, and regularly participate in our GF Community Forums. I am not sure why someone wouldn’t, if capable.

Perfect spot, I tell you! And what a dream to meet such intelligent people that I hope to have as much talent and knowledge as…one day!!