Can I cut carbon fiber?

I did an experiment, not with an epoxy saturated carbon though.

Cutting Carbon Fiber cloth Made on a Glowforge

Pulled this chunk of material out of the trash can LOL. I drew a silver dividing line through it. The top portion is raw 11oz 2x2 twill weave carbon. The lower portion below the silver line is the same material but it’s been saturated with water clear silicone rubber - another experiment for another day haha. Anyway, interesting enough, both these holes were cut at the same settings and the raw carbon cut muc…

I made a carbon fiber part using cross weave carbon fiber cloth and ‘z-poxy’ finishing resin. the thickness is close to 3/32".
I tried high power at 332 speed for one pass and it appears to have cut the resin but the carbon fiber cloth was not cut. My second attempt was high power at speed 170 for three passes. I cut a 1" circle and it appeared to have cut the resin all the way thru but the carbon fibers were still holding strong.
I was able to trace the cut lightly with a razor blade and the circle dropped easily.
My findings are a mixed result; the glowforge cut the resin completely through the carbon fiber allowing me to easily free the cut material but it requires the extra step of cutting the cloth with a razor. For my needs it works well.
I should add that it’s not a clean cut due to the carbon fiber strands but a light sanding of the edges is all that’s required.
I made a video of the entire cut but im not sure how to post it. 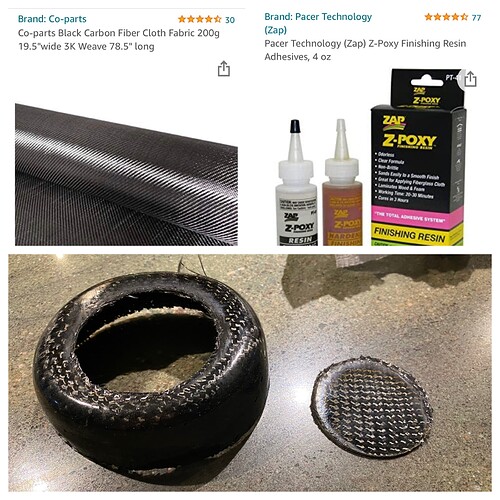 The SDS for that resin says about heating it:

Sounds potentially dangerous to the machine and the operator to burn.

I would avoid that in my 'forge like the plague.

it will probably dissolve the guts of the glowforge.