Anyone else out there in the

world into the crazy world of crazy hot peppers?

. I’ve been growing a few strains in a grow tent in my apt. Currently I have Ghost, purple cream,fatalii gourmet jigsaw,chocolate scorpion and a sweet pepper called thunderbolt. My grow space is 2’X4’

These are some of my jigsaw peppers from my last harvest, such an intense red the camera on my phone had a hard time picking it up, the photos dont really do them justice. 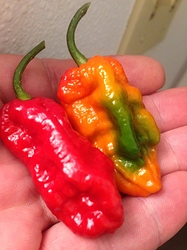 This was the first major harvest of this season. 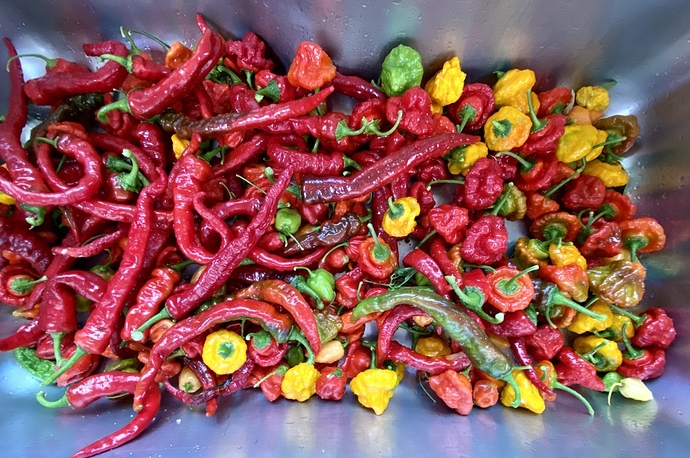 I have a super delicious heirloom pepper from Turkey. My parents bought a few in 1983 at a random farmer’s market. Brought the seeds back and we’ve been propagating them ever since. They are hot, but not stupid hot, and have a great flavor. Very fleshy.

If you want seeds, I’m happy to send you some!

They are hot, but not stupid hot,

I’m of the Jalapeno. Chipolte end of the spectrum (more about flavor) and my housemate freaks out at that much that I need a skull and crossbones label on anything with them.

Hot is a matter of perspective as I once discovered when I ordered “just a little hot” in a Thai restaurant where almost every customer was Thai, and could barely eat it.

As an aside I made a “mead” with 20 pounds of honey and 5 pounds each of raisins and fresh Jalapenos that I removed the seeds in those big glass water cooler jars, What I discovered was that the flavor was greatly enhanced but over time capsaicin eats itself and becomes much milder. The Jalapeno smell and flavor threatened to rip your head off but it never backed up the threat.

i’m only minorly into it. every year i grow jalapenos and thai dragon peppers, and then i add in another. this year it was habaneros. and we made a nice trinidad hot sauce with the jalapenos and habs (and a lot of cilantro and garlic). didn’t use as many of hte thai dragons this year, but they generally go in every stir fry (i.e., the “let’s use up those extra vegetables and toss in some chicken” meals).

They are hot, but not stupid hot, and have a great flavor. Very fleshy.

If you want seeds, I’m happy to send you some!

omg yes! this is exactly the kind of pepper i like. hot, but not overwhelming, and flavorful (otherwise what’s the point if you’re not just a plain masochist?).

They are very unique imo, they have a cool heat profile were they are a really long build up and also numb the mouth. hottest thing i have ever eaten by far. they are a thin walled pepper with few seeds lots of oil blisters on the inside as well. 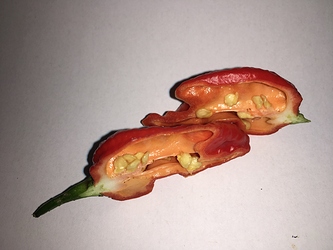 that pepper sounds really cool is there some in the picture of your harvest there? I could be down for some seed exchange just waiting for my current crop to ripen.

That mead recipe sounds very interesting to try, i ferment hot sauces but those are a lacto ferment. I’ve broken my sense of heat when it comes to peppers i ate a whole ghost pepper off my plant a few months back and now when i eat jalapenos they just taste like crunchy green bits lol. come jalapenos can be crazy hot tho lots of variation from plant to plant and how it is grown. I find stressing my plants during the fruiting phase lowers my yields a bit but sure makes the peppers angry

Sometimes the pain has its benifits lol getting an endorphin rush from a super hot pepper can be a crazy experience and addictive lol. When you make your sauces do you ferment them?

This was the harvest off of a single plant last year. The plants are very hardy, grow large, and set tons of fruit. I even had on that survived 10 Northern California winters before a house fire (neighbor’s) took it out. Trunk was over 1.5" in diameter! 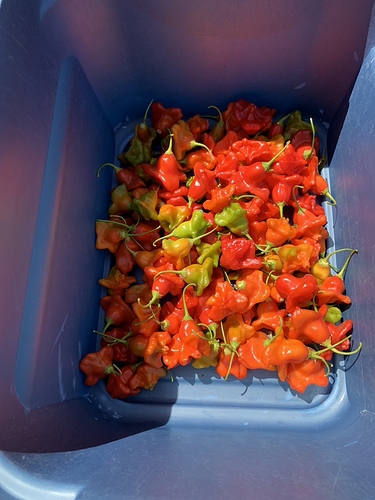 When you make your sauces do you ferment them?

i have fermented, but only once and it was just ok. the trinidad hot sauce i mentioned is just refrigerated, so it only has a shelf life of a couple of months. but it’s soooooo good. perfect for eggs or fish because it’s very bright (all that cilantro).

i have a friend from another forum who makes a huge batch and ferments every year and it’s so popular with his friends, he actually has a lottery to see who gets bottles (i’m waiting for him to finish this year’s batch, haven’t tried it yet).

i attempted to make lables for them with my

but i bought the wrong shape of bottles lol so it was a pain. 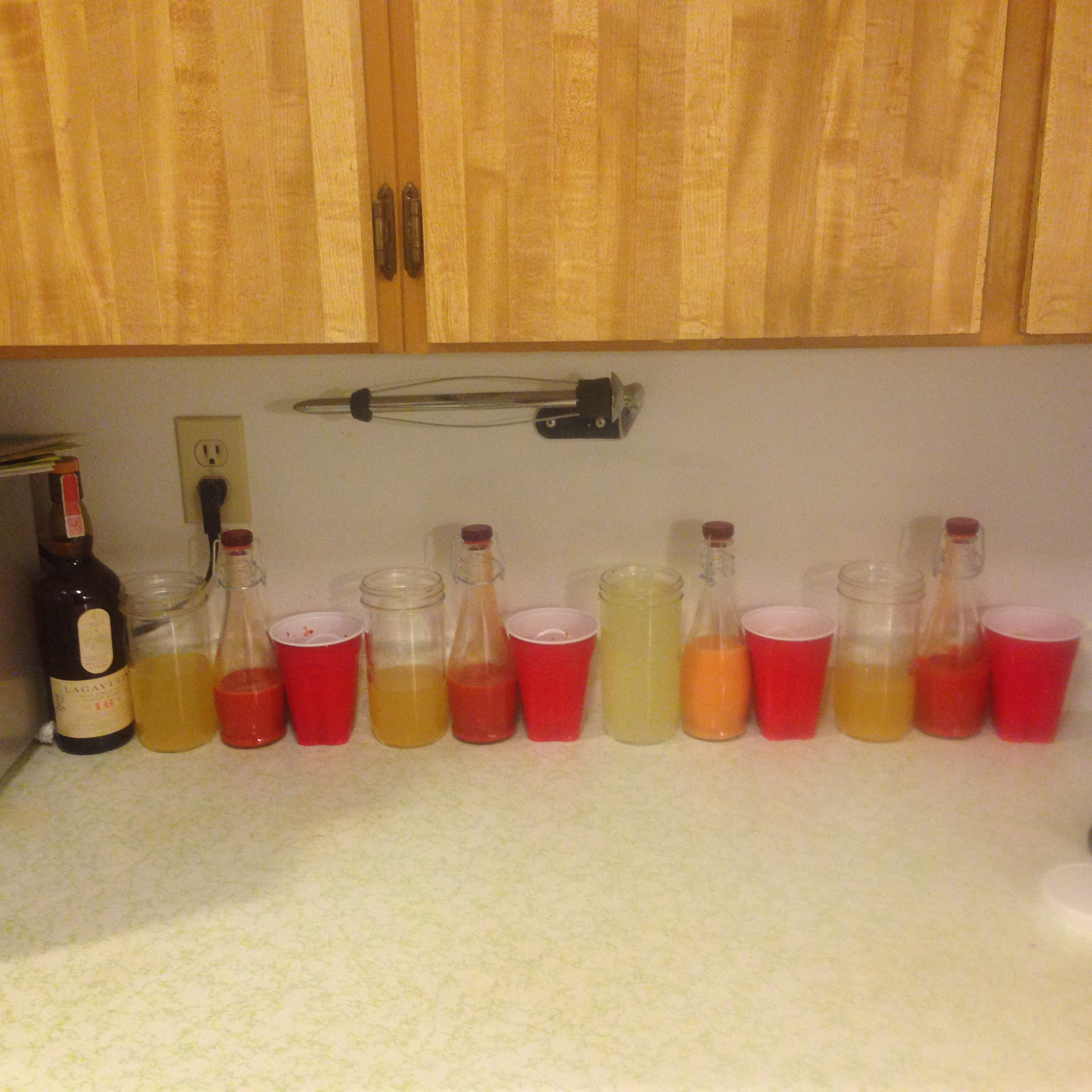 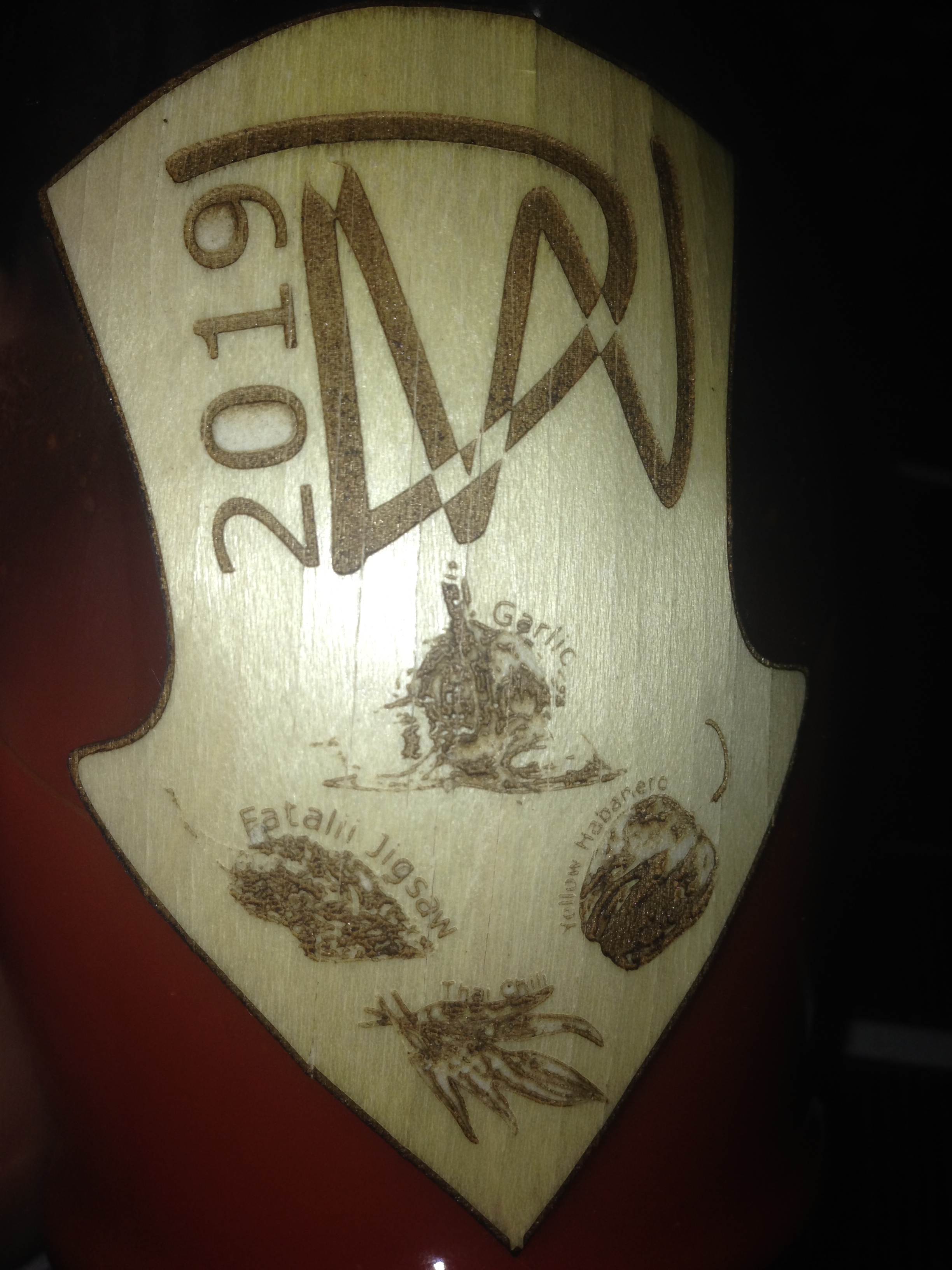 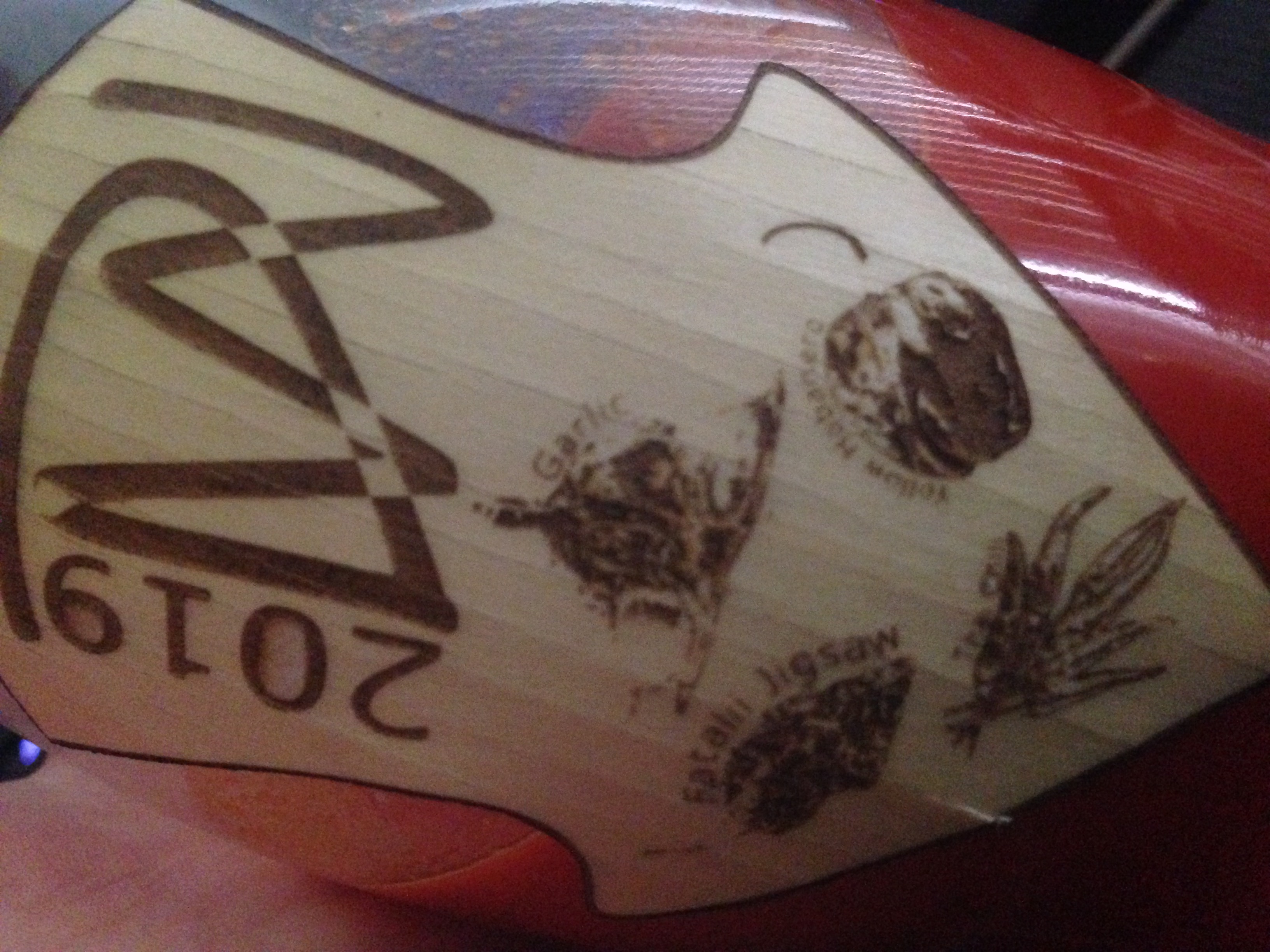 they ran for about 3 weeks, just did the ferment style where it is the cut up pieces in a 2.5% brine solution. didn’t go crazy and try a mash.
When i was done i ran the peppers through my juicer as well and that worked out very nice.

I also made some hot salt by juicing 2 of the jigsaw peppers and then just mixing them around with rock salt till it was dry, one crystal give you a real nice kick. 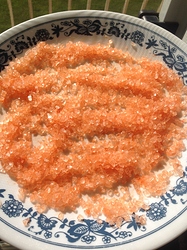 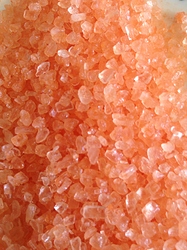 Nice peppers. I haven’t grown any for a while. Usually I can pick up a whole bunch for cheap at the farmers markets this time of the year. I haven’t done a fermentation batch of sauce, just vinegar.

I did some ghost chili sauce I call Death in a Drop. It is absolutely the best on oysters.

Nice tip for the hot salt.

looks a lot like a bishops crown or something like from that family. I really love the funky shapped peppers.
That is pretty cool you were able to keep the plant going for 10 season my oldest plant is a ghost pepper that is going on 2 years old now. i cut it back perodically because my grow space is limited. 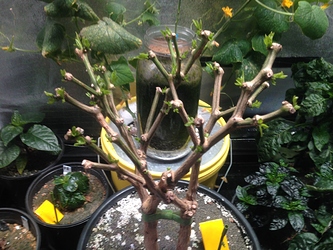 IMG_7027.JPG3263×2448 1.33 MB
and a photo from about a week ago. the plant withe busted top bottom right is my chocolate scorpion messed off anf broke it off the other day lol. lower right i have basil lemon basil winter thyme and shallots and on the right side there you can see my lemon tree ive been growing from see. 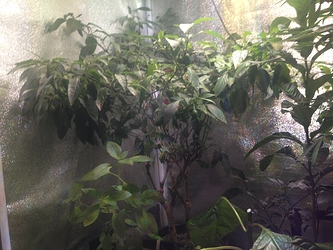 The recipe is super simple. Toss it all in the blender, put it in a jar/bottle, refrigerate.

Add all the ingredients to a blender and blend till smooth.

Because of the vinegar, this pepper sauce will keep for several months

Thx the salt was just a spir of the moment thing but turned out well. You should do a ferment they are super easy to do just need to keep things clean is the main trouble but once they are going they just sit on the counter for 3 weeks and do their thing.
This was my ghetto airlock i made (worked but not great) 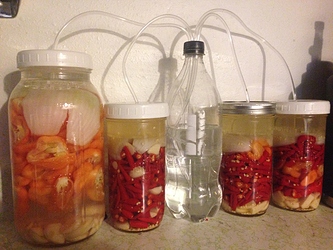 IMG_7828.JPG3264×2448 1.49 MB
i actually made a hold down for the peppers in the jars as well thats why there is an even head space for all the jars. they are not needed but its good to keep the fruit below the liquid level to stop mold growth. 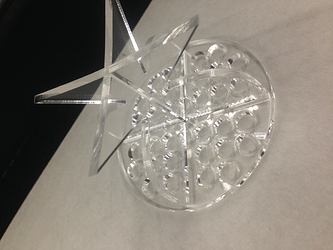 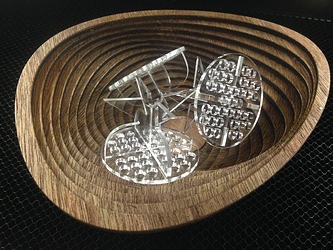 Nice idea for the submerge appliances. I 3D printed some presses that work well.

I have a nice airlock I made for a mason jar. Did sauerkraut last year but nothing since. Need to get my kit out.