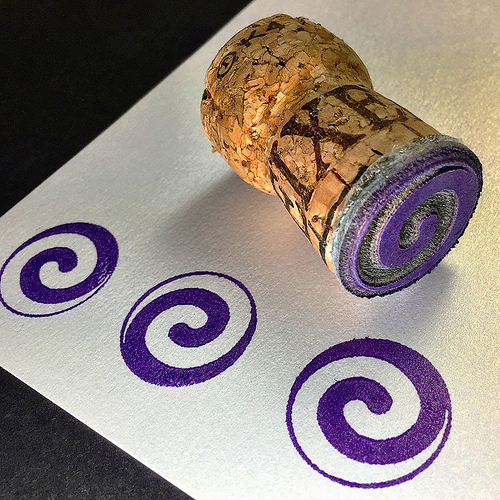 Busy work week but, I managed a quick late night project. I had some “low odor” laserable rubber on-hand that I got to use with a different laser cutter and, never did. So, I created this little spiral stamp on the new Glowforge. I mounted it on a champagne cork using carpet tape, with a layer of plastic packing foam between the rubber and cork.

Important lessons learned here include how to size artwork for the GFUI and, that you absolutely do not want the residue from laser engraving rubber on your hands. Not only does it smell awful, it wouldn’t come off with repeated applications of soap, water and, eventually, pumice.

For subsequent attempts, I wore latex gloves to handle the cut rubber and, used a soft brush under running water with some soap to remove as much as possible.

I used an outer glow fx layer in Photoshop in order to ramp the ridges towards the base (as suggested elsewhere). I started with the settings from another thread but, increased the power some. This one was engraved at 220/70. I cut it out at 185/Full but, had to finish the job with a craft knife.

The Cork is a great touch! I will have to get some Champagne so I can use the corks.

Thanks for the tip about handling that stuff. I’ve got some but still haven’t tried it. I will definitely use gloves.

that came out great! I have been wanting to try stamps, this may just motivate me!

i recently tried to do this but had no success… find any good rubber materials?

Looks like that made a very nice looking stamp!

I used the low-odor grey rubber from these people:

YES YES YES thank you for sharing your knowledge