Does anyone have a general idea about dust created from lasering tile? I am already in love with the look of it, but it seems vaguely dusty in my space while lasering 3 tiles, and I’m wondering if anyone’s measured particulates or has any thoughts on this. Silicosis is not a thing I want to mess with.

Do you mean dust escaping into the air while you are engraving? that doesn’t sound right. What’s your venting setup like? Have you inspected the exhaust port for blockage?

It’s vented to the outside, fairly airtight, no blockages. But there has always been a smell in the workspace despite this. My lid has never quite lined up.

@chris1 has an entire thread on how he vented his glowforge to eliminate odors and particulates including the readings from his particulate meter. Here is at least some of what he did:

I haven’t noticed dust collecting faster around my glowforge than anywhere else. Engrave some draft board - if you see smoke you have a problem.

My lid has never quite lined up

While the fan is running , the GF work space is a low pressure zone. There should be little to no smell or particles until the job finishes and the lid is open.

The GF is under negative pressure, so even if the lid doesn’t line up quite perfectly, you should still not get any smells or debris escaping.
If I can smell or see anything at all from the unit while it is running, I shut the machine down, pull off the exhaust hose and clean out the fan grid. Personally, I do this about twice a month with the amount of BB ply I process.
I also made a point to get the entire exhaust run totally airtight by using aluminum tape on every seam/connection, and foam weatherstripping inside the end of the exhaust tube under the clamp, to negate the small gap created by the spiral wire.

You’d think but the smell is there. I’m going to read over Chris’ thread and see what I can figure out. Thanks. It has always stunk.

Any smell would indicate an exhaust leak. If the exhaust grill is clean, then there is probably a leak in your exhaust run. The exhaust fan moves more CFM than the intake fans, so every crack in the machine should be sucking air in. The exhaust run downstream of the fan is pressurized, So start with the first possibility, the hose connection. Personally, I have more faith in a screw clamp than the spring job that is supplied.
The lid not shutting down all the way would mean the surface your glowforge is sitting on is not flat. The factory uses a granite slab to calibrate the machines, and the case has a degree of flex in it. You can shim a corner to correct that.

Personally, I have more faith in a screw clamp than the spring job that is supplied.

Mine is completely odor free with the default spring clamp supplied. For me, the trick is to put the spring clamp a couple of rungs back from the opening, slide it onto the GF flange and then squeeze the clamp and bring it up over.

The squeezing of the clamp is the tough part - I do it with fingers but it’s a tight fit. One could use a pair of pliers very easily though to hold the clamp and maneuver it onto the flange.

Yes. Check that tube and the flange connection. I don’t have odor from mine, nor dust. What helped the most was the 3D printed flange extender That allowed me to get the connection snug to the exhaust port.

There is an epilogue here, which is that after all that, I was still never able to get to 100%. Despite the claims from others that it’s possible to have zero smells from the Glowforge, and reworking all of the seams and connections half a dozen times, the best I can do is to mostly not smell anything. My Glowforge usage has gone down substantially, so I haven’t done a torture test with the latest configuration. When I had a small leak in the duct tape while making Christmas gifts last year out of baltic birch, I fumigated myself out of the room and had go full Walter White to finish the job. 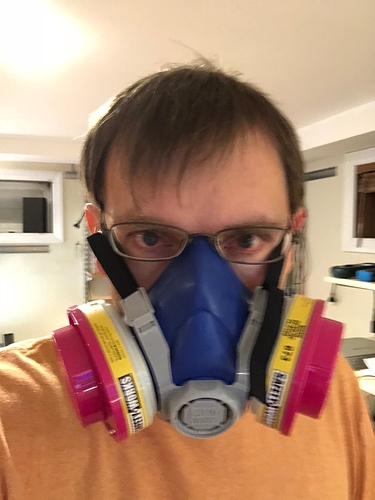 Hey man, that’s the stuff nightmares are made of.
I can almost read the filter specs…

Thanks Chris. I really appreciate the update. What is the machine you were using to check for particulates in your original post about it? I have a homemade CO2 / VOC sensor I cobbled together from off the shelf parts but it’s not calibrated all that well.

thanks! guess I will stick with homebrew for now.