I braved the bees blocking access to my exhaust port and measured the airflow at the point of exit from the house: 26.54 ft/s. Given a 4" duct, my ignorance, and some math, I get about 139 CFM. If the Glowforge is able to move 200 CFM with nothing connected (which I intend to measure later), that seems like a reasonable loss, given my use of cheap equipment and inept measuring technique etc. This is the “before” measurement as I intend to install a booster fan and upgrade the duct to semi-rigid (with obsessive taping of all seams and gaps) this weekend. My goal is to keep the PM2.5 particulate level in the room as low as possible so I don’t give myself lung cancer. I will report my findings as I go along. 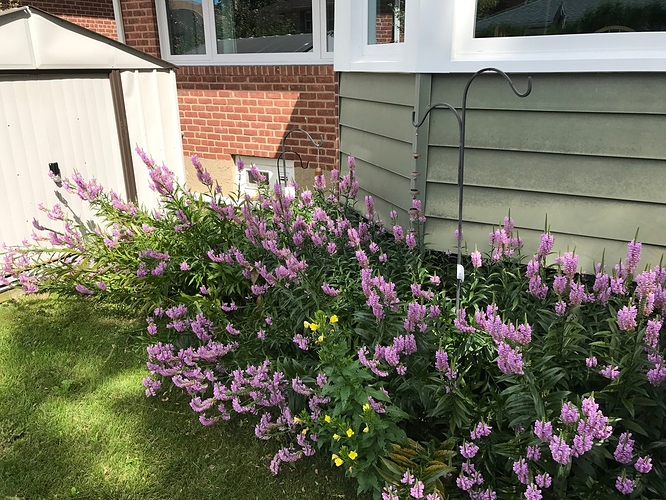 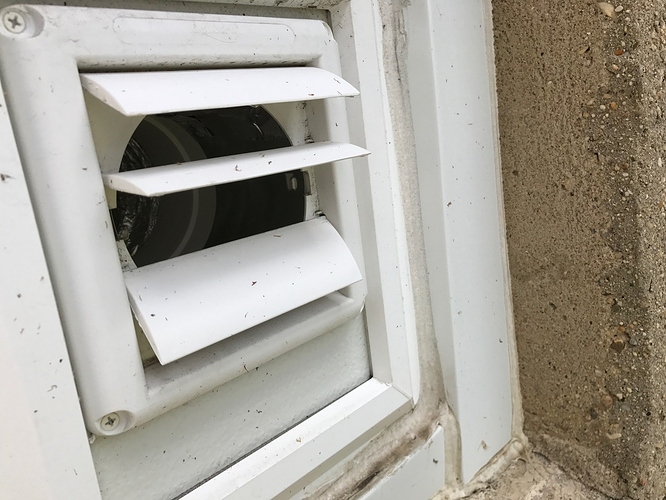 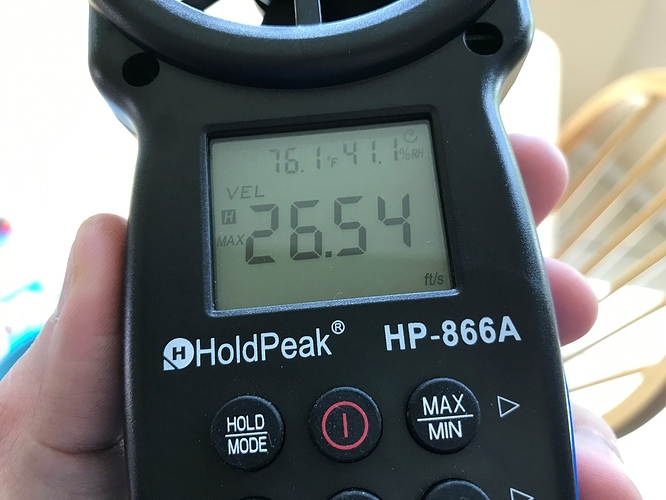 IMG_8119.jpg1154×866 186 KB
23 Likes
Advice on Fumes and Ventilation
Anyone do a teardown or have an exploded view or wiring details?
WHAT THE WHAT! PRODUCTION UNIT! :squee:
One more Venting Question
Glowforge IOT suggestions
Tracking down leaks
Ceramic tiles and dust
henryhbk September 9, 2017, 8:54pm #3

An A-B comparison of vent hose type on noise levels outside For those of you who followed my visit from @clone the other day, there was a discussion about the noise outside, along with many prior posts by me and others. So on the debate went, and @dan suggested it was the type of hosing I had chosen. Now I have to say I am a big fan of solid metal tubing for fire resistance and sealing (with a dryer I care only about fire since a little humidity isn’t going to kill anyone). and the tube I boug…

I don’t care much about the noise outside, and if it’s a problem inside I’ll try insulation.

There’s a new duct in town!

Holy crap, what a long process. So much tape. I taped the insides, I taped the outsides, I taped the difficult angles with disgusting but flexible foil mastic. I installed and mounted the fan. I replaced the flex duct – I considering not bothering with that, but I stuck a flashlight up it and the damned thing is full of pinholes!

The verdict? I don’t know, I’m running a job now. It smells pretty clean in here, but I’ve been in this room all day and my sense of burned wood may be dead. Foobot particulate reading is low, 6-9. The real test will be in half an hour when it finishes.

More numbers: the inlet to the booster fan with nothing connected: ~200 CFM. The outside exhaust with the booster running but the Glowforge idle: ~80 CFM. Outside with everything running: 150 CFM. So it’s up a little bit, and importantly, I haven’t interfered with the airflow. One thing that was amusing: it’s almost midnight, so I had to go out with a flashlight to measure the airflow. When I went around the corner, my flashlight was making a visible beam due to the smoke in the air…

The noise level seems exactly the same as before. All in all, I’m thinking this was a worthwhile addition even though it took up my whole afternoon. 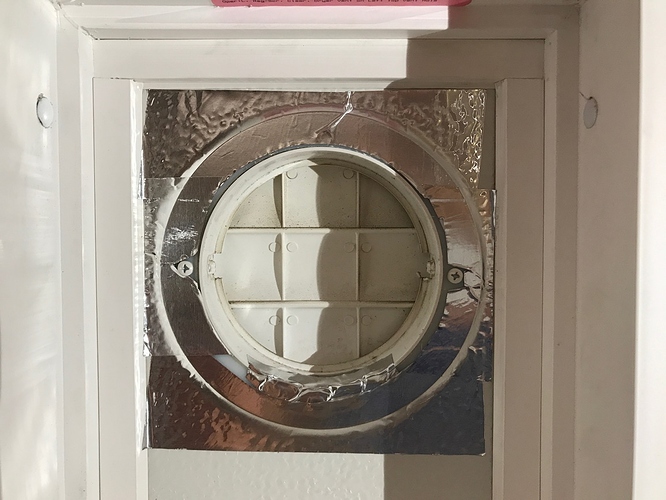 Inside and out. Butyl tape around the flanges. 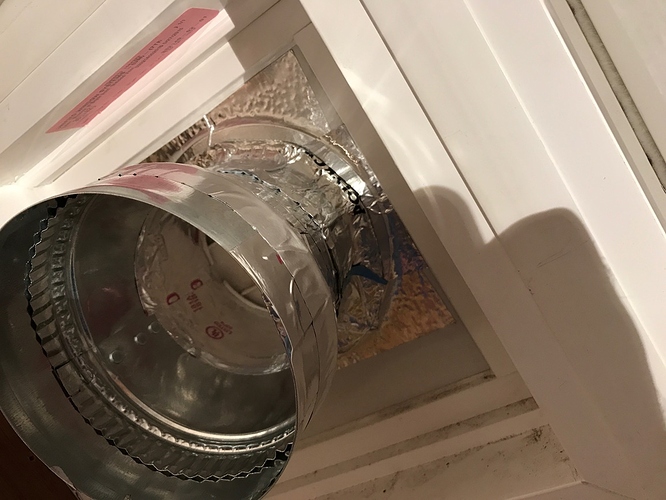 Coupler to the 5" fan outlet: 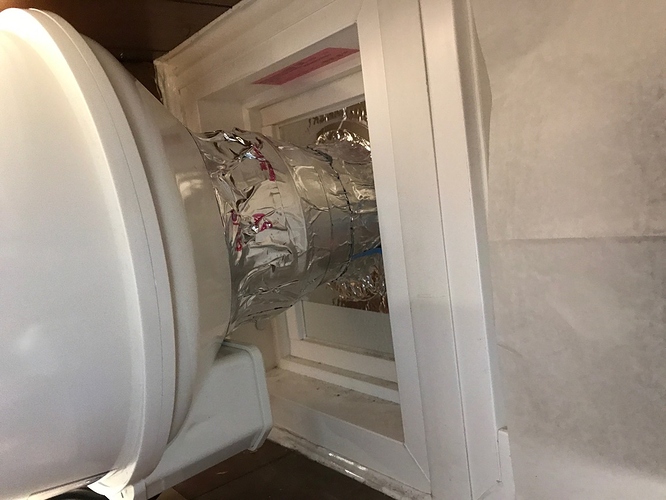 Bracket is on, nothing is going anywhere. 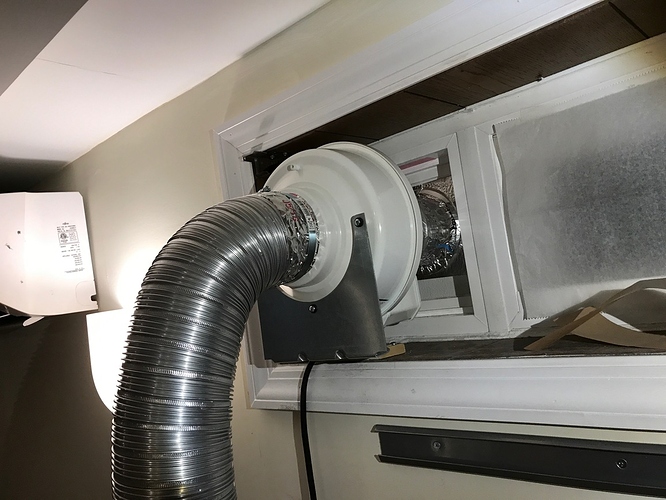 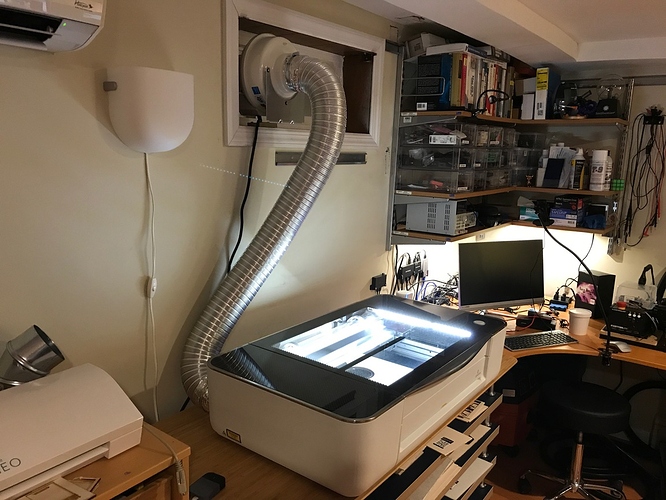 What’s your plan for turning the booster fan on and off? Plug it in when you’re forgin’? Flip the switch a little before and a little after a job? Something high tech?

Did you happen to test the airflow with just the Glowforge, but with the booster turned off? Might be interesting to know how much impact it’ll have if it’s ever not on for any reason.

Last question: how much noise does the fan make? I have a similar looking fan and it’s exceptionally quiet, considering its size.

Not unless plugging the Glowforge and the fan into the same power strip and turning them on together is high tech.

Did you happen to test the airflow with just the Glowforge, but with the booster turned off? Might be interesting to know how much impact it’ll have if it’s ever not on for any reason.

I was curious about that, but I plan to ensure that never happens. I assume it would restrict the airflow and cause smoke to back up into the room, but I haven’t tested it. I’ve only had this set up for long enough to run one job, and it’s pretty late at night now.

Last question: how much noise does the fan make? I have a similar looking fan and it’s exceptionally quiet, considering its size.

It’s a super quiet fan. If it weren’t at risk for making my office look like a scene from Brazil, I’d consider using one to cobble together a fume hood for soldering.

I replaced the flex duct – I considering not bothering with that, but I stuck a flashlight up it and the damned thing is full of pinholes!

There are tiny points where the light shines through, but they are airtight. I have no idea for the reason behind this, though!

I’m going to move this to Beyond the Manual, since this isn’t the recommended ventilation configuration.

Yes, I have one. It takes up space on my workbench. I’ve always wanted to just vent the smoke outside. That was the original reason I put in a window with a dryer vent, but I never bothered to finish that project. Now it has a far more glamorous use and the soldering station has to be relocated. 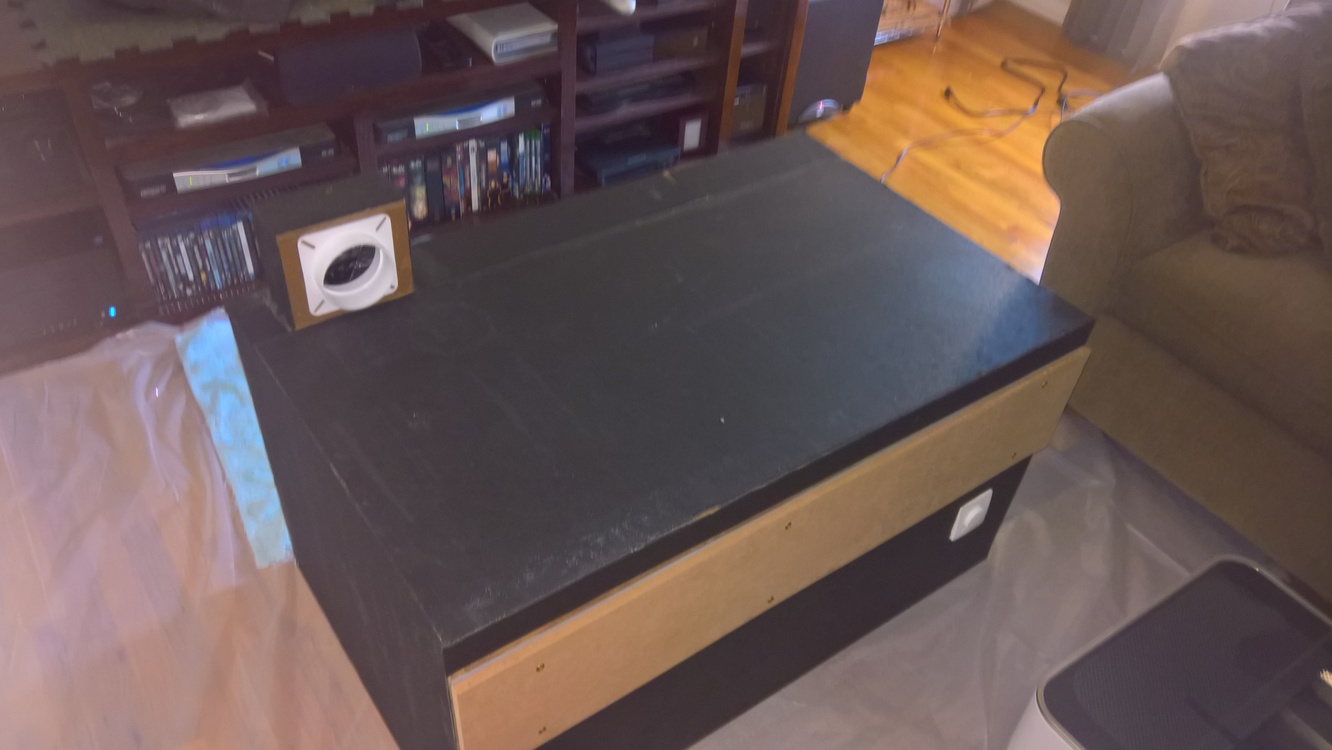 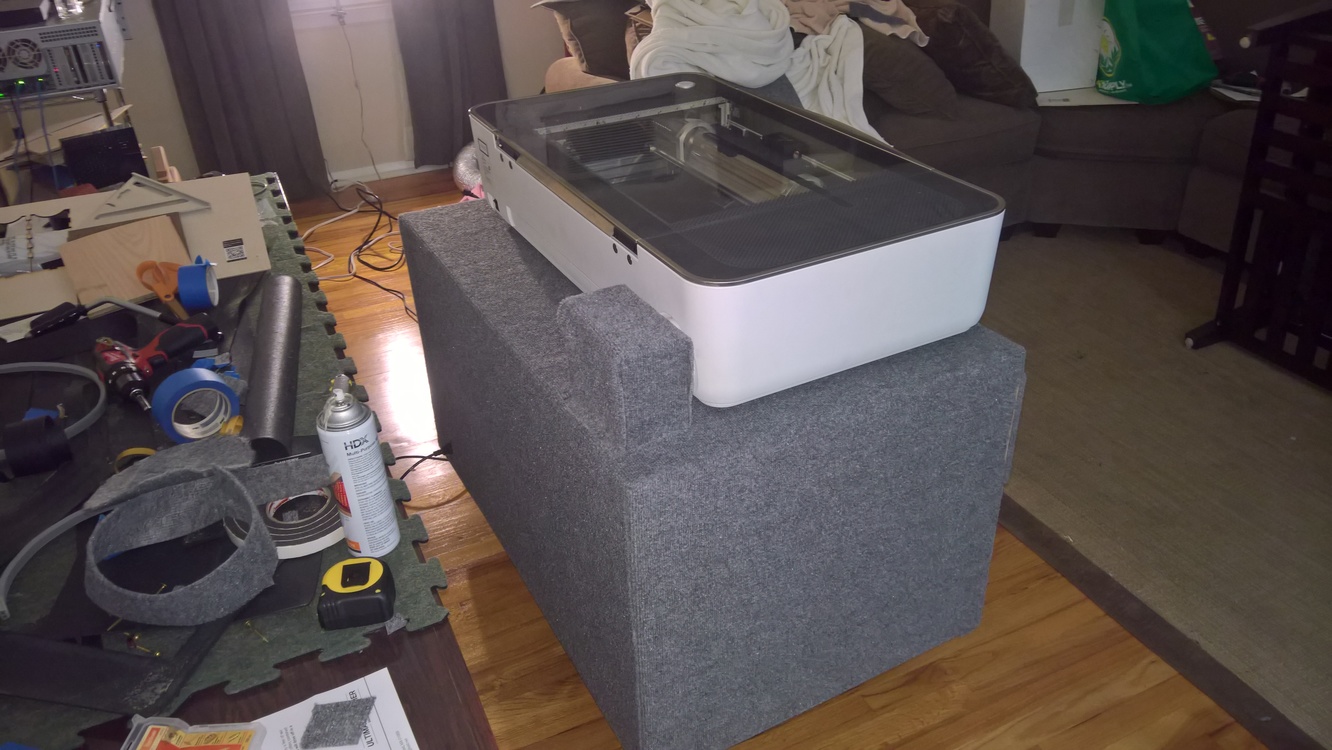 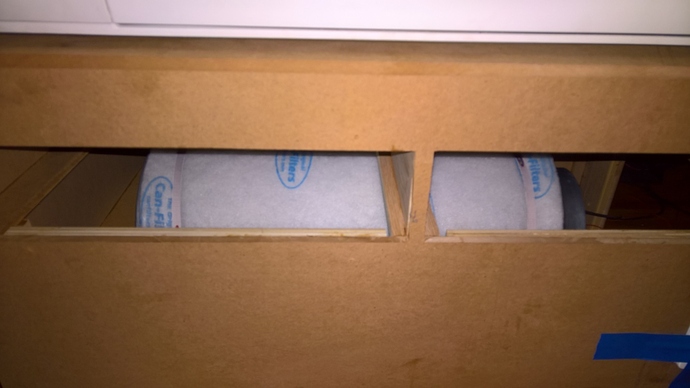 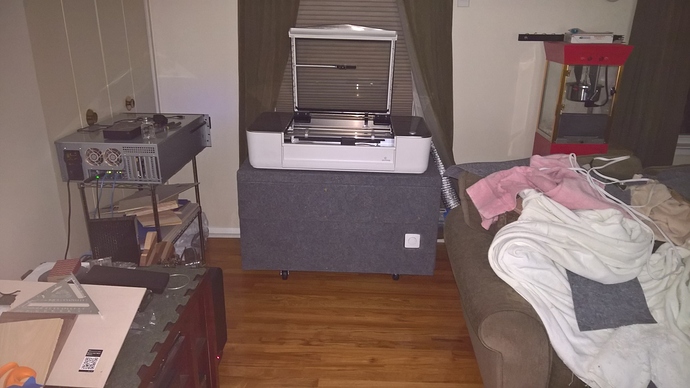 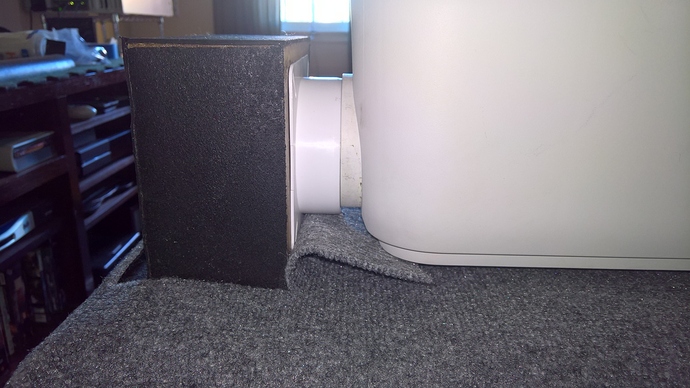 1/2 mdf pin nails and glued, wrapped in rubber, wrapped in indoor out door carpet
intake port lined on the inside with dyno mat

Slots for 4 inch Hepa pre filters
Can -66 carbon filter 30lb of carbon
Fantech prioair 8ec 800cfm variable speed i run it at 1/3
1000lb dolly from harbor freight
Gets most everything out of the air but I still dump it out the window
Kills all the exhaust noise exhaust is now silent minus the built in fan that unfortunately I don’t think I can remove because they prolly have a rpm sensor. The only noise I have to deal with now is intake

But seriously, I hope this means you can run your GF whenever you want now, instead of waiting for hypersensitive cranky neighbors to fall asleep! Nice build.

That is an awesome idea. I would have never gotten the output of the Glowforge lined up with your filter unit. Great job.

There are tiny points where the light shines through, but they are airtight. I have no idea for the reason behind this, though!

FWIW, as far as I can tell the standard cheap ducting is an aluminum-plastic sandwich with Al on the inside. Almost anything can put pinholes in really thin aluminum, but my bet is on some non-neutral pH component of the ash/cinders, combined with a touch of ambient humidity. (isn’t wood ash a source of lye?)

It’s not caused by the Glowforge, they come that way. Here’s one, literally new in box, never used: 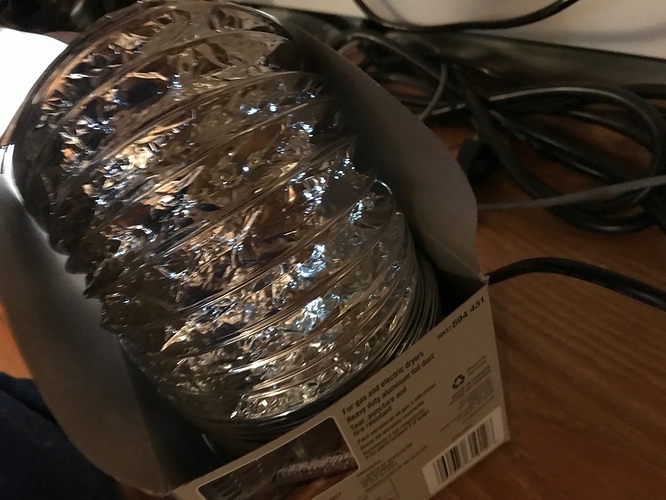 You’re right about the plastic except it’s on the inside (according to my multimeter). So that’s probably why it doesn’t leak like a sieve. I expect the cheap thin aluminum just doesn’t handle the extreme crinkling that well. I see on the box it says puncture and tear resistant, so despite my concern, I probably didn’t mangle mine by attaching and reattaching it so many times. I’m still happy I replaced it. Technically it might be less airtight because it doesn’t have the plastic film, but I think I now have negative pressure from the booster fan so everything gets pulled up up and away.

@Clone, Holy Moley! That is one beautiful installation. I’m sure it makes it convenient to run when you have other people doing whatever and you aren’t driving them nuts with fans buzzing and whirring.

Yeah, I have seen multiple flex dryer hoses that light up like a Christmas tree when light is shined in the tube.

No air leaks in them.

This will probably be my last comment on the topic of air quality, as I’ve done all I can. It’s probably good enough, but I’m disappointed that in the end I wasn’t able to keep the particulate levels from spiking to unhealthy levels. In particular, while cutting and engraving some acrylic this evening I saw as high as 44 μg/m³ (over one minute), which is pretty crappy. The US air quality standard is 98th percentile over 24 hours < 35. I didn’t hit that, of course, I only cut two small signs so it was only over 35 for a few minutes. And it clears out pretty quickly afterward.

Anyway, I set out to get some measurements and see what effect I could have on them, and I guess I accomplished that. And now I own some new gadgets, which is never a bad thing. 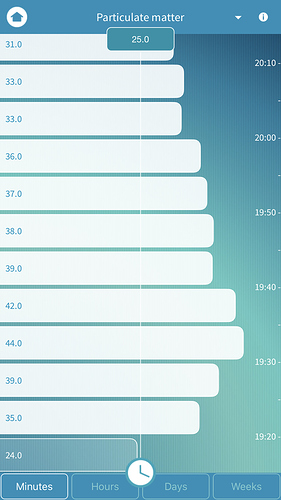 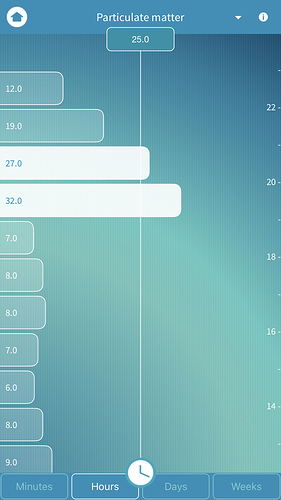