Charring pattern difference at start vs end of engrave

I was playing around with my toy USB microscope, looking at the details of engraves done with my GF (and admiring how nicely tiny text comes out!), and noticed something interesting. I did an engrave of some text (as a vector engrave) into the Medium Maple Hardwood; here’s a letter “m” that was part of it: 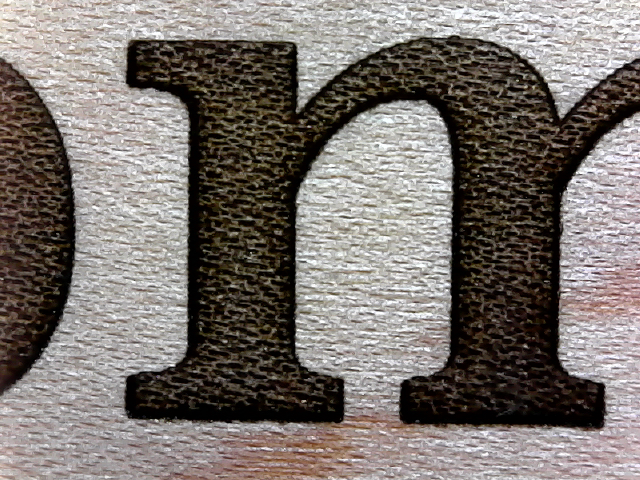 Probably looks very standard to everyone here. But I’d noticed during engraves that the “wall” of parts of letters was light. Well, when I tipped the board to look down at the walls of the engraves, I noticed that the the “sides” (those faces perpendicular to the direction of travel of the laser) and the “bottom” (the part of the text that is where the engrave starts, which of course is normally the bottom of the text) were the dark brown (I assume it’s charred wood). But the “top” (the wall at the top of the text, where the engrave ended) was not. Here’s a picture of the bottom of the “m” : 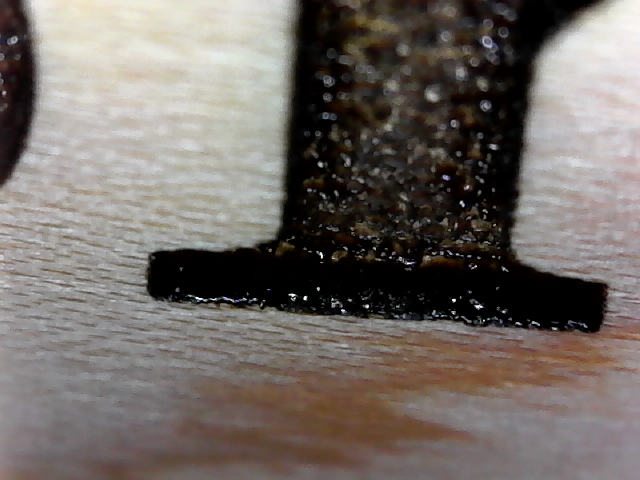 And here’s a picture of the top: 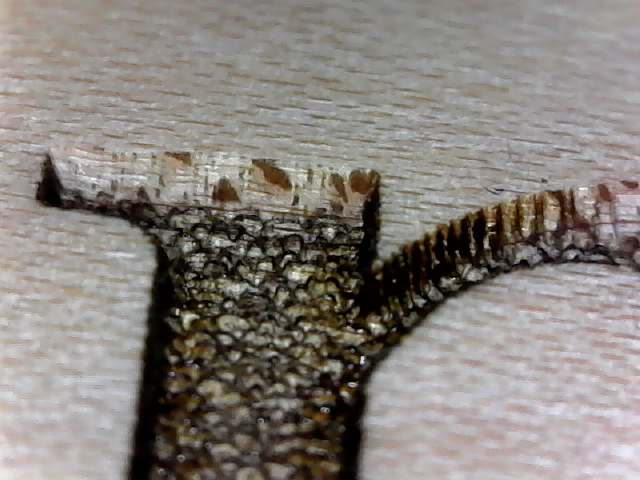 And just to clarify, the laser head was moving left to right back and forth for each pass, and each successive line of the engraving run went progressively up.

Now, I understand why burn marks on the masking paper for PG materials seems to have a directionality to it – the airflow from the fan presumably blows the smoke in one direction. But it’s not obvious to me why the top/end of an engrave would look different than the bottom/start. I guess there’s a chance that the wood was not perfectly flat, and/or the laser beam is angled a bit, but I don’t think even that would explain it.

Any ideas what would cause this difference?

Looks like sap residue buildup to me. You see it on the bottom of most engraves in wood, but it varies by species.

Now, I understand why burn marks on the masking paper for PG materials seems to have a directionality to it – the airflow from the fan presumably blows the smoke in one direction

Yep. I think this is it. The machine blows the heated resin from the wood from the back to the front so a lot of the gunk engraved away in the letter is smashed against that bottom wall and some of it sticks. It’s probably hot too especially the stuff that is blown there from right nearby.

The machine blows the heated resin from the wood from the back to the front so a lot of the gunk engraved away in the letter is smashed against that bottom wall and some of it sticks.

Yep. With a resinous wood (cherry) you’ll get actual 3D deposits. With acrylic, you’ll get a pile of “snow” at the bottom.

You also get it on birch ply and maple and literally every wood I’ve tried. (Which is now including rosewood, padauk, ipe, Black palm, Purple Heart, orange osage, sapele, oak, poplar, Birdseye maple and a bunch others. Idk, I don’t have my spreadsheet.

I didn’t get it on the wet pine I engraved, but that might just be because I didn’t engrave deep enough.

OK, the consensus seems to be that it actually is sap being blown by the airflow.

That leads me to wonder: has anyone tried a second pass at a much lighter power level and/or higher speed to see if you can have the laser blast away some of the charred sap?

It’s come up just a bit in the past. Here’s one reference I found:

I think wood might be a better medium. Downloaded a Green Man from thingiverse and converted to depth map: [greenmanpic] You can see the goop that accumulates downwind. Used two slower passes for depth, then one fast pass to clean off the char. Then a cut that was just a bitmap trace outline, outset by an approximation of kerf.