Picked up a bag of bamboo clothespins at the hobby store cause they looked like they would fit in the 'Forge, and spent a day putting together some designs for them yesterday… I think they’ll work for bag clips. (Chips, cookies, M&Ms…) 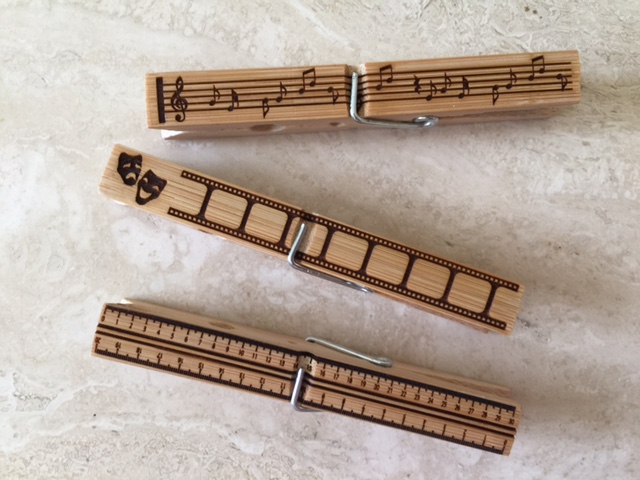 So for the designs…we’ve got Engineer clips (one of those triangular rulers…sorry - scale, chuckle!), one for Musicians, and one for the Drama/Cinema team. That should cover most of the family avocations. 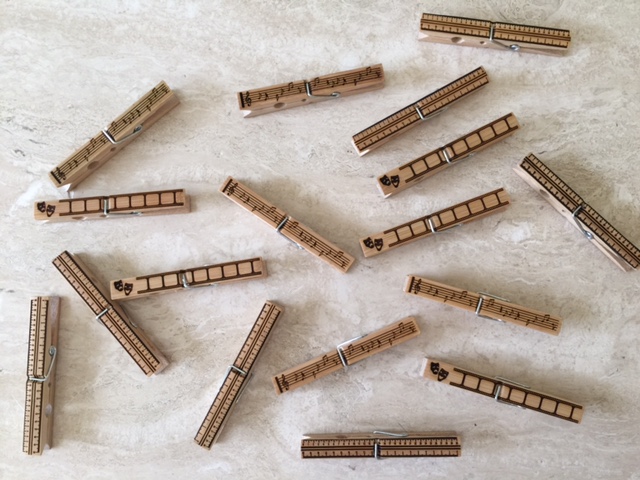 Very easy to do these with a single cut jig and then drop in half of the clothespin for engraving.

Cute. (If not a little laser-obsessed.)

Hey, they’d better get used to it!

I love 'em! The musical one is my favorite. You need a foodie/cooking one too.

The “ruler” is called a Scale.

Which begs the question… Is it to scale? Would be totally cool if it was.

Probably not after i got done fitting it to the clothespin.

Do these have the designs on both sides of the clothespins? they look great!

Oh wow…great little gifts!! You definitly have your laser goggles on…
Hmmm lets see what else I can stick in my Glowforge as you walk around town…lmao

they look great. I’m still amazed at how tiny the lines can be. Ha, if I were to print some up as chip-bag clips, I think I’d put warnings on them, like: “You really don’t want to eat that potato chip.”

Do these have the designs on both sides of the clothespins? they look great!

You could easily do it, but these don’t yet… I was thinking of personalizing the other side…“Benjamin’s Bacon Bits” or “Samantha’s Sweets” or “Jack’s Junkfood”.

Or this would work for me:

put warnings on them, like: “You really don’t want to eat that potato chip.”

you can do all sorts of great stuff with a C47.

I was flipping through a book on film-making when I stumbled over a box-out mentioning the C-47. Or a clothes peg. Wooden clothes pegs are much-used on film-sets, where they don't conduct heat so can't burn people or melt. They make perfect handles...