I’m getting ready to join the inline fan crowd. The vivosun looks like it is a popular choice and is less expensive than the cloudline. Is there a reason I should look at the cloudline over the vivosun? I did a quick search and didn’t see anything with a comparison of the two.

I’m currently considering upgrading to a higher CFM fan than the 4" Vivosun. Smell and noise levels are fine, but I’ve noticed more smoke in the chamber than with the built-in fan, and things get dirtier faster as a result.

The 4" Vivosun is 195 CFM, and I don’t see any 4" solutions that exceed ~200CFM. So I’ve started considering a 6" (e.g. Vivosun has one that’s 390CFM with variable speed for around $56 US) with adapters for a 4" line. (Any suggestions on such adapters from the peanut gallery?)

Any hardware store should have HVAC ducting reducers. Good luck.

So I’ve started considering a 6" (e.g. Vivosun has one that’s 390CFM with variable speed for around $56 US)

I bought this fan a couple of days ago, it will be delivered on Monday.

I also bought a short length of 6" duct (my existing window insert has a 6" hole, which I have reduced to 4" with the blast gate), and will make my own reducer for the 4" inlet duct on the machine.

I did a couple of different fan solutions (6" with 6 to 4 in couplers).

The first one was for a fixed purpose and it is great on air movement and reasonably quiet: 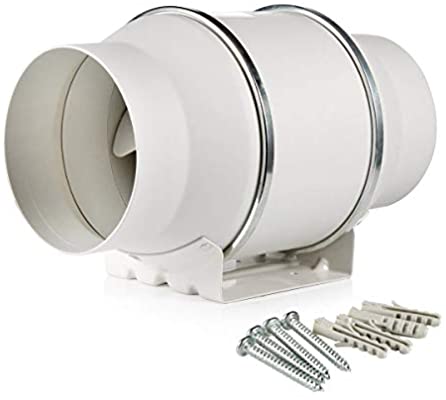 The second one is for when I take it out of my office: 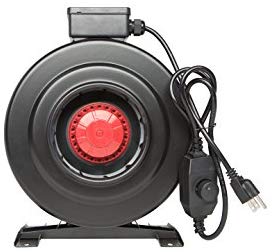 These allow me to have a long run between the GF

and the fan using a 15 to 25 foot 4 inch duct connected to a 4 to 6 inch adapter and either extend the exhaust to an outside wall or even a carbon filter (to knock down the smell).

under negative internal pressure forcing the smoke and smells out the exhaust.

As an addition noise suppression, the fixed install uses insulated 4 inch duct between the GF 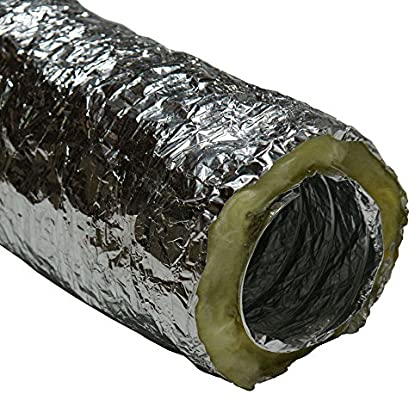 it will be delivered on Monday.

Not connected to GF yet. It’s a lot louder but as it will be in a back hallway close to the window (current fan is 8’ from GF in same room) I don’t think it’s going to be an issue.

I have a Wimo outlet set up so I can just say “Alexa - turn on glowforge fan” without having to go back there to turn it on.

My machine is filthy after a weekend of large engrave projects, so it could have come soon enough. 4" by itself is not sufficient, even though I get no smell or smoke.

Even on low? I assume it’s still much quieter than the integrated fan…

I was the first to buy the cloud line, I think. I feel it’s a little higher quality but I mostly bought it for the integrated fan controller because of how little space I have to move around in the RV.

Oh yes, I meant louder than the 4" vivosun, even on low, but certainly a LOT quieter than the internal exhaust fan.

I purchased the Cloud Line as well, originally bought the 4" and it worked well, really like the integrated speed controller mostly due t the distance from the GF to the window (about 17 feet) I am venting from. I exchanged the 4" for the 6" just to have more CFM capacity when cutting really smoky material. They both work very well and are very quiet. The remote inline speed controller I find to be incredibly convenient.

Nice, not much increase for the additional CFM.

How’s the bigger fan treating you? I finally got mine installed, I can leave the desk against the wall or rotate it for passthrough access: 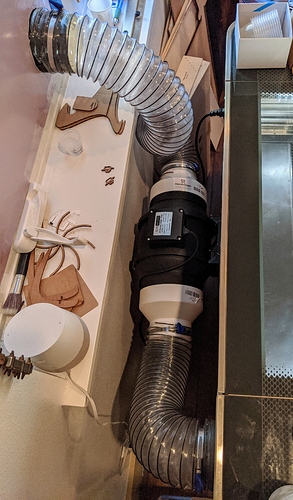 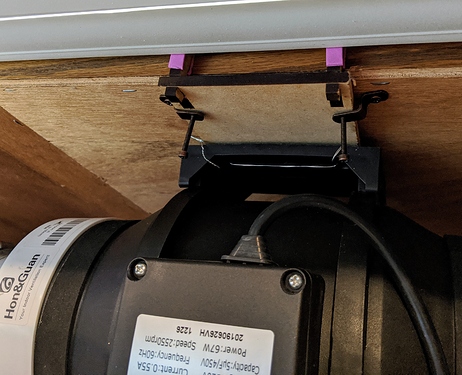 I’m quite happy. My previous setup had the fan on the floor at the end of the provided duct, then a 25’ run back down a hall and window. Now I have the fan on a shelf back down that hallway near the window, so although it’s a little louder in comparison, the location means I can barely hear it from my main living/working space. Which means I have to remember to tell Alexa to turn it on when running a job!

That also means the movement of the head is about the loudest thing while running. You can hear the air assist fan as well.

The visible smoke evacuation is much faster compared to the 4" fan, obviously.

I never saw a completed pic of your 4/6 adapters. Did you wrap the framework with tape?

I went with the Hon&Guan PVC adapters pictured above and used some craft foam to make a tight seal.

I used a little cling film… it’s on the inlet side so a perfect seal isn’t necessary (the exhaust is a 6" hose out to the window.)