So Friday, I got to meet with @dwardio at the Colorado Plastics 4th Friday remnants sale.

As part of the trip, he invited me to experience (

up close and personal

. I had not been that giddy in a long time.

!!! It is beautiful and much bigger than I thought it was (gonna need to rethink Glowster’s

location at the house).

Took lots of pictures to tide me over until mine arrives or another visit can be scheduled.

for a project. He told me about it before I came down so I had time to figure something out.

My wife loves butterflies, so I located a good choice of a project: 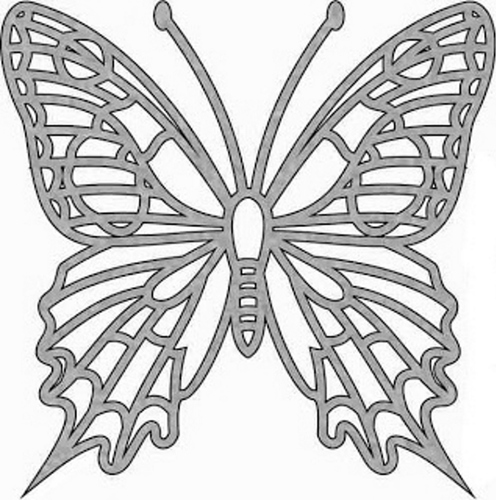 I did an online svg conversion, but @dwardio showed me his technique on conversion with Capture and Inkscape.

Once it was in Inkscape, we discovered that the black lines were treated as an inside and outside cut. It was going to required a lot of cleanup (to get a single line) or just let GF

Got to learn about the GFUI and how changes work (

Back story, I had him show me how the laser head removes and attaches to the gantry. He told me that the GF startup would be longer (for calibration) since we had disconnected and reconnected it. The first time he turned it on, the calibration process lasted 90 seconds (and I thought - “That didn’t seem too long”). So he turned off the GF and turned it back on. This startup took a few minutes this time.

@dwardio decided to run a project that he knew was working and I gleefully watched. SUCCESS!!

So on to my project we went. Loaded it into the GFUI and got to do my Mulligan on the first “Press the Button”! Laser lights up, head begins moving and smoke is exhausting to the outside! YES!!!

Called my friend whom I have been keeping up to date on (since the crowdfunding project in Oct 2015). Changed over to Skype and he got to watch live a GF in action.

So here are the results: 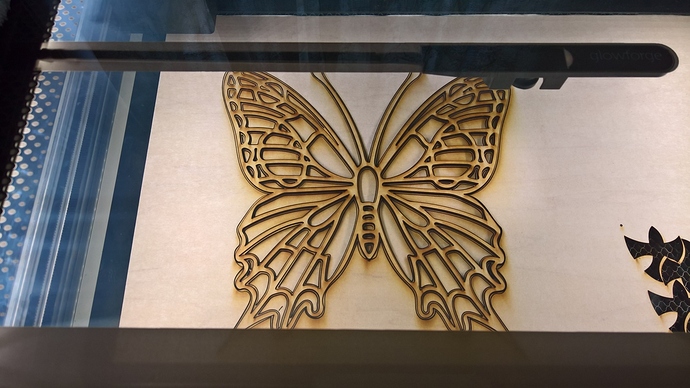 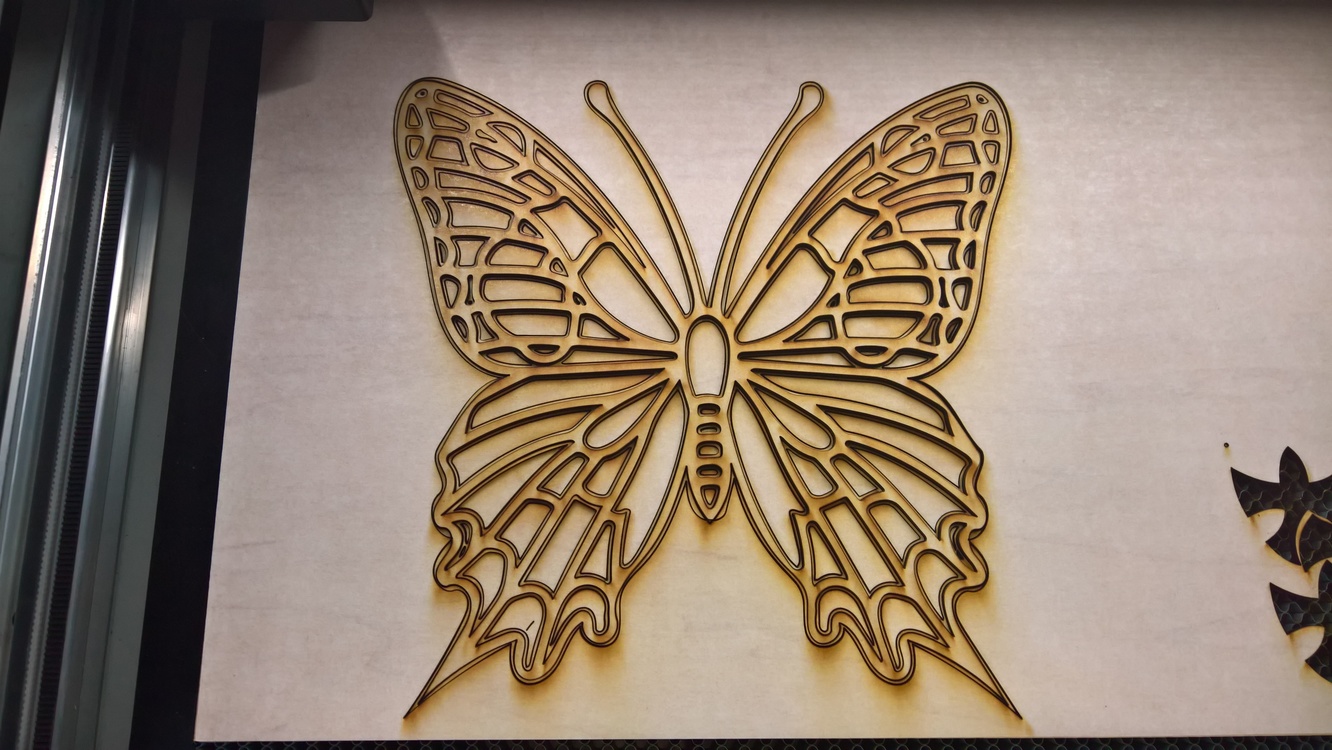 Decided to remove the PG

and level the project on the bed. 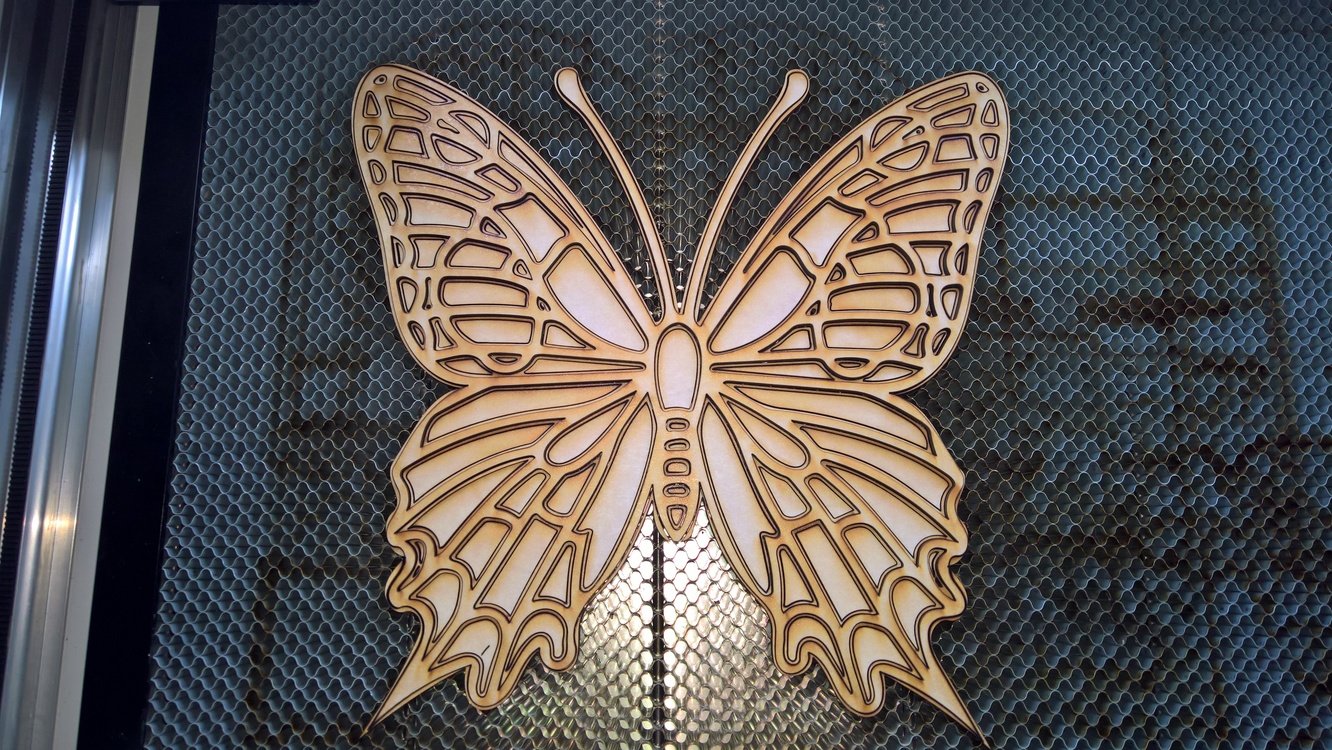 Then got an idea 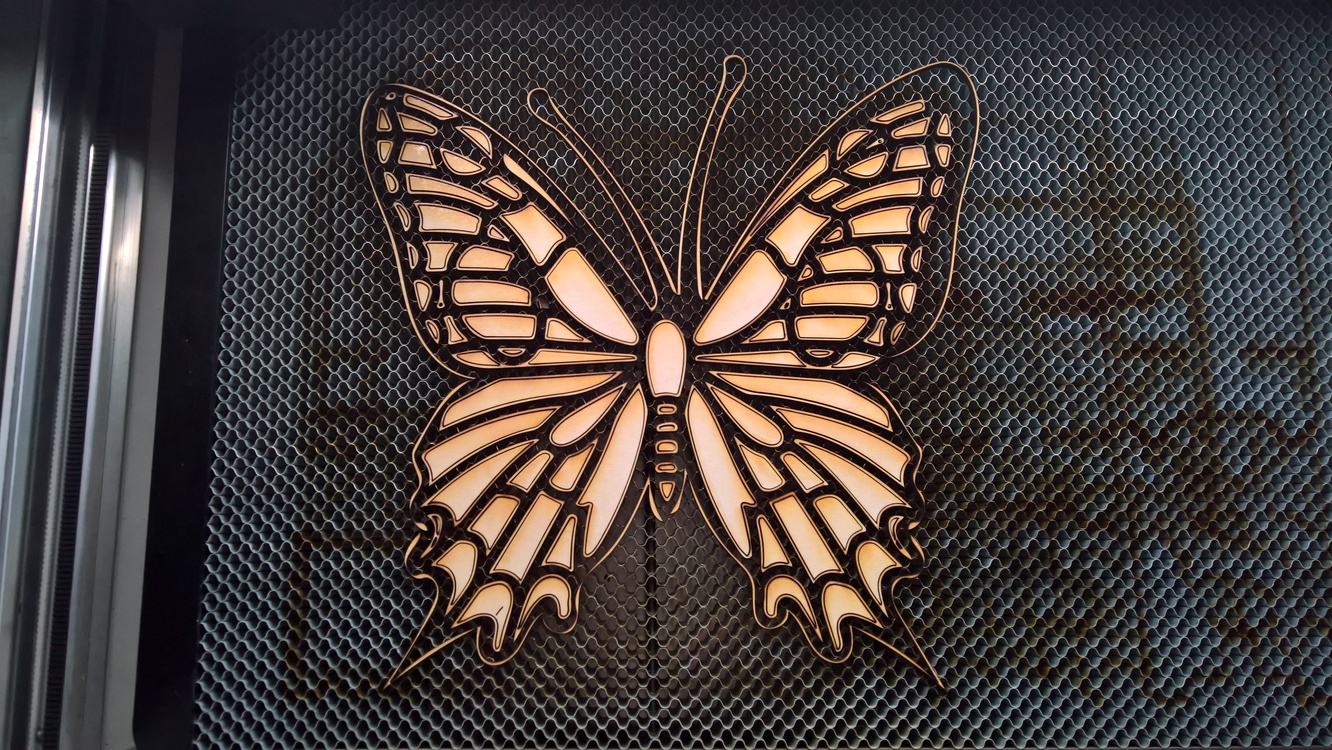 So here is the project after the Gorilla Tape weeding (people, you really this weeding tool!!): 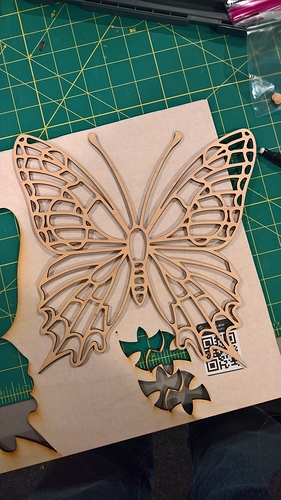 Now I had planned on making a stand for the butterfly, but @dwardio had a better solution. So while I did the weeding, he created some wonderfully simple stands.

Here are the upright pictures: 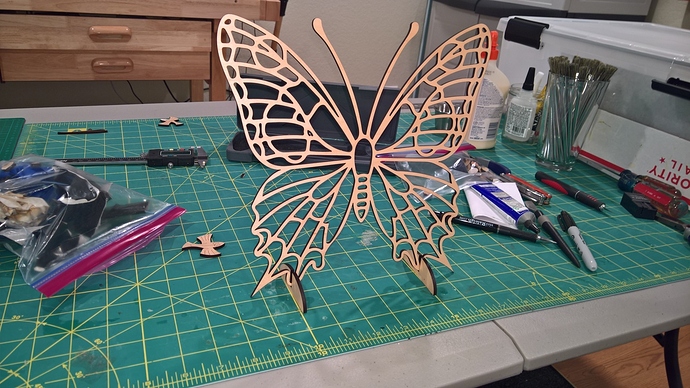 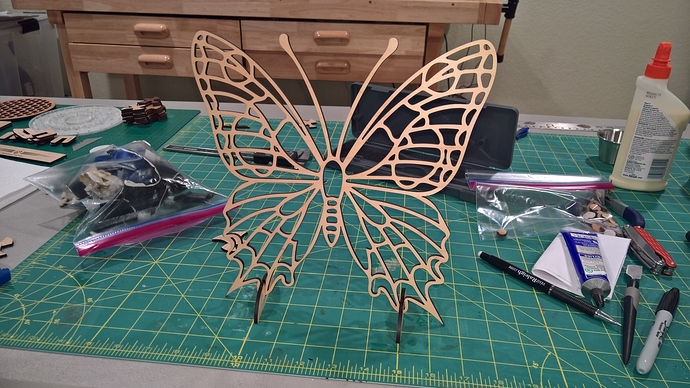 Some better shots with dark background. 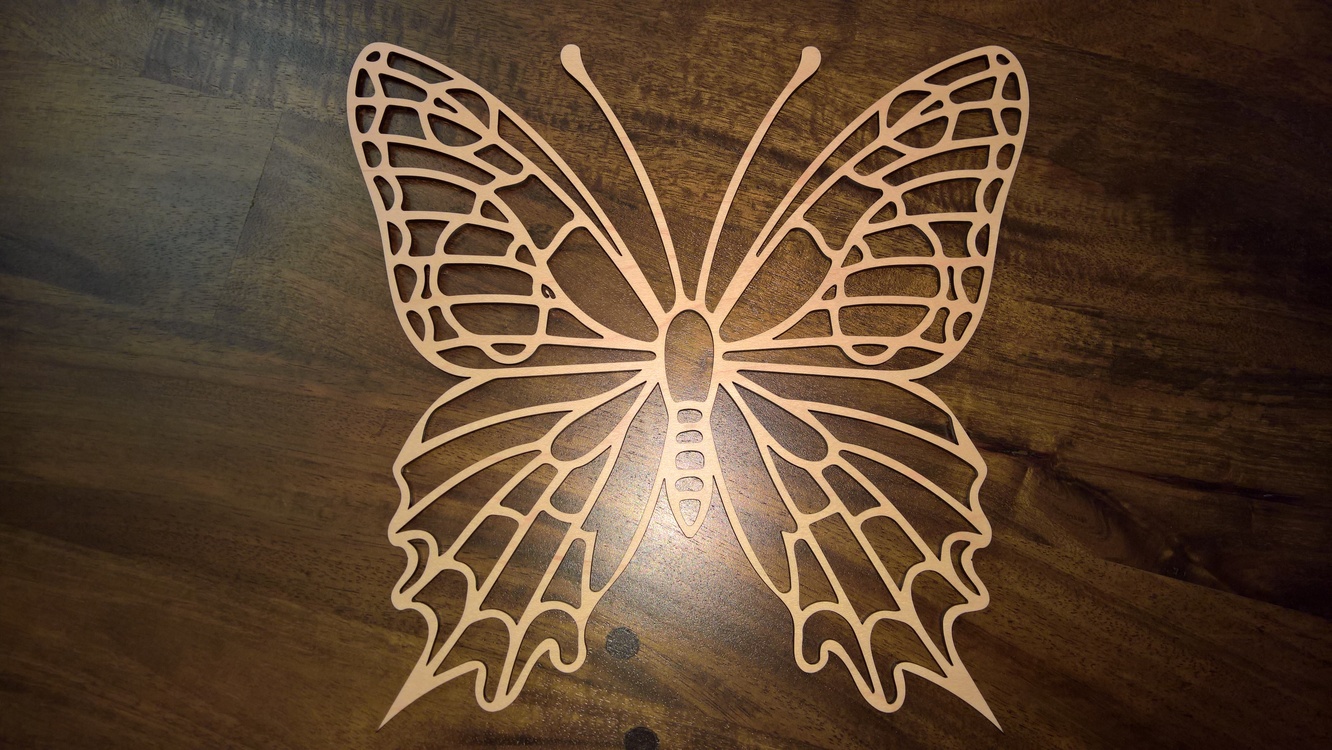 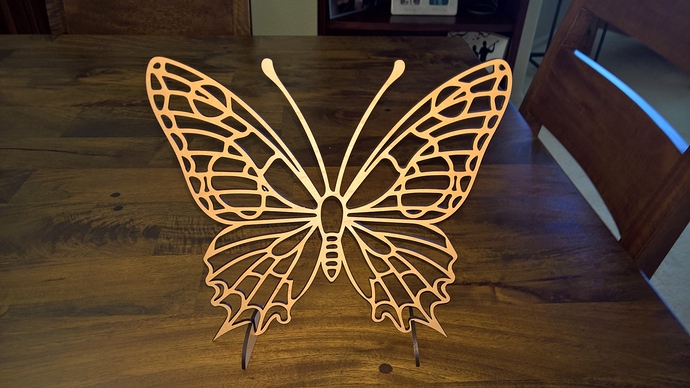 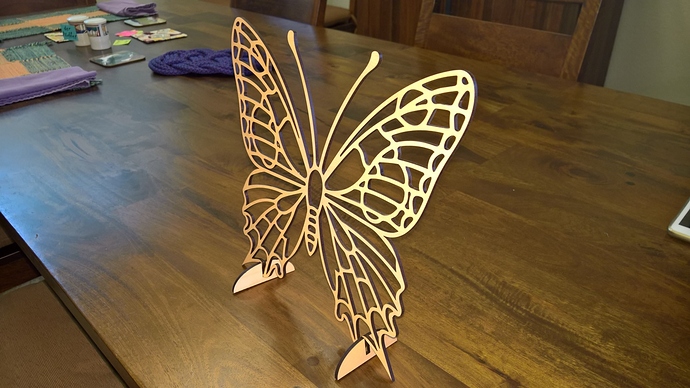 BTW, My wife loved the butterfly

… (PS - She still doesn’t know we are getting a GF

What a gorgeous butterfly! Great choice for a first project.

I’d like to be a fly on the wall when you tell your wife about your GF.

She may not know about the GF

, but she is wondering about all the cardboard, acrylic and materials I am collecting.

great job to both of you.

It was great to meet another 'forger IRL! He was pretty much grinning from ear-to-ear the entire time… 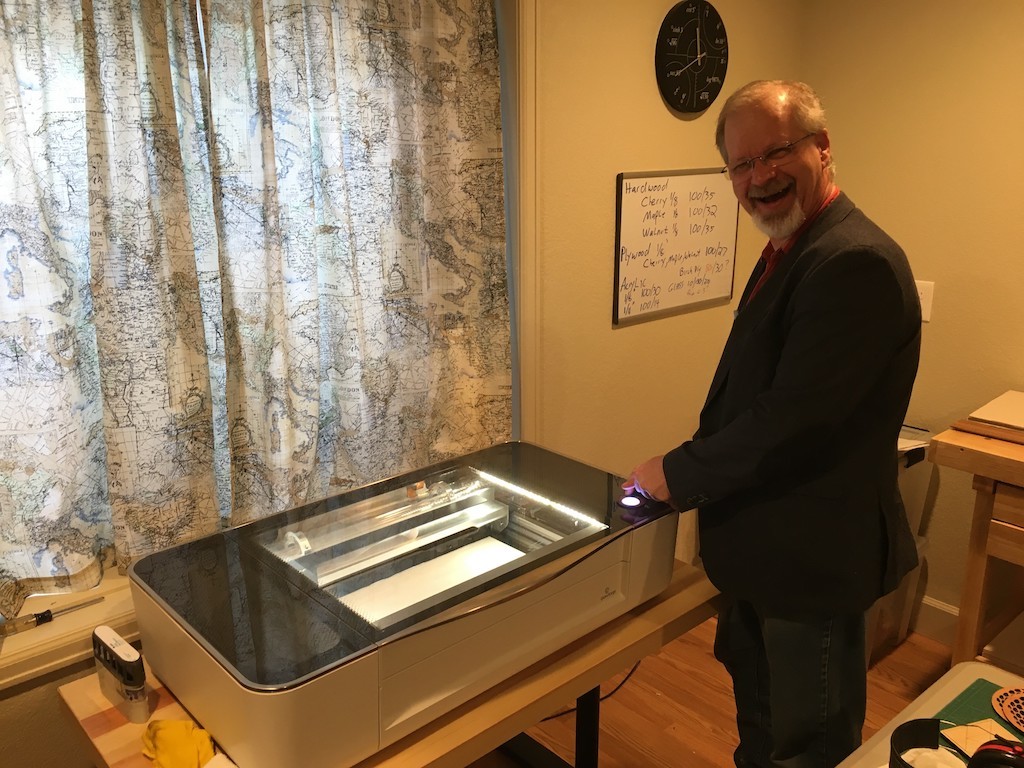 Make sure you report that to support, it’s been a bug I’ve experienced a few times (and if you wait, you get a purple button).

Thanks for the reminder! We saw the purple button, so I re-seated the head, power cycled, and all was well.

Beautiful! Nice you could get an in person look!
Um… Your wife doesn’t know???

Make sure you report that to support, it’s been a bug I’ve experienced a few times (and if you wait, you get a purple button).

Got that yesterday (and yes I reported it). I’ve noticed very few bugs thus far - though it could be that I attribute most mistakes to my own lack of experience, rather than the machine. So this bug threw me for a loop. When I the purple button started flashing, I decided that the machine had been possessed and turned it off/unplugged.

So yeah, glad to hear that others have encountered this. I was considering an exorcism, but it sounds like there may be more reasonable solutions

Awesome Butterfly! So many Glowfolk meeting in real life! When is Glowcon happening!

I’m just picturing your conversation with your wife when the Glowforge arrives.
“Honey, remember that wooden butterfly you liked so much. Well, now we can make as many as we want!”

Wonderful to see this joyful smile! Glad you enjoyed your visit @PFI-Guy - and kudos to @dwardio for opening up your home and sharing this experience

Oh, and the butterfly is stunning! Hope your wife loves it.

Initially, it was going to be a Christmas '15 surprise. Once it got pushed back a couple of times, I thought not to mention much about the GF

until I get an @Rita email on the shipping date.

“Honey, remember that wooden butterfly you liked so much. Well, now we can make as many as we want!”

She is the creative part of the marriage. I REALLY have to work hard on artistic things. My forte is being thrown into the “brier patch” and cleaning it up to make things work. Thus PFI-Guy (Please Fix IT).

Well at least it sounds like a good surprise for her then?

Awesome! The experience and the design!

Good on you dwardio!

Love the Glowforge meet up and the butterfly is gorgeous. Overcame the design gremlins well.

Wonderful work! I’m so sorry for the failure - thanks for reporting it. That in particular is a defect we think we have licked on the latest builds but every report helps us make sure we’re not missing something.

Regarding the double cuts… what you want is to click the white area, not the black area. Click means “cut this out”, so if you click on a line, it will cut out the line itself!

Thanks. In retrospect, using the trace feature in the app was probably the way to go.

Yup. That was the way to do it. Here’s a different butterfly traced from a printed silhouette. 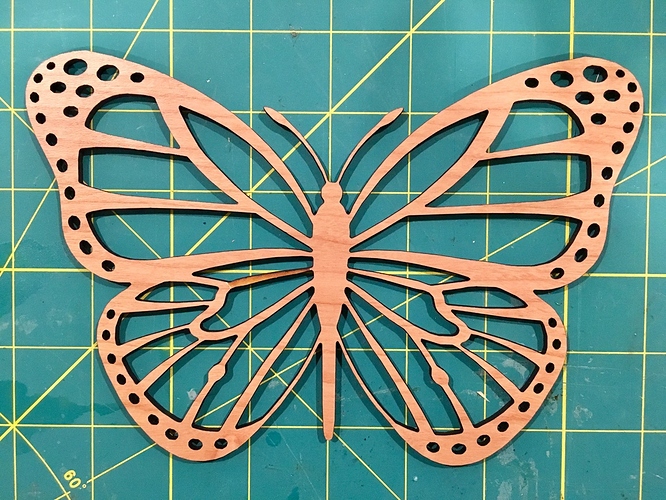 It only took ~2 minutes to click each off the interior cutouts.

Btw, I tried the scan direct from the iPad trick, but couldn’t get a glare-free image.

I had to turn out the shop lights that were on, and I saw the glare from the bed lights and didn’t think it would work, but it did. Too bad, my experience was delightful - but it was also stark black and white line art.