In my ongoing projects of ceasing flight simulator devices for my son’s flight sim (as he gets closer to flying for the airlines) and this project was the cluster of 3 warning lights/buttons under the glare shield on the 737. On the plane this part includes 3 lights, one amber one which is the “master caution”, one “fire warn”[ing] and the third is a set of 6 other warnings with amber lighting. Each light is also a tactile switch (the is a 12mm tactile switch mounted at the base of each of these which silences/acknowledges the thing the light is indicating. Each light is a pair of LEDs which I saw was not sufficiently diffused by the thin layer of frosted on the backside of the acrylic, so I cut a piece of medium frosted to sit between the LEDs and the face plate to diffuse th light more. Each pocket has 2 LEDs inside which each pair is controlled by a MOSFET transistor as the combined current exceeds the current of a arduino’s output; this arrangement also lets me use a 12V LED dimmer on the main circuit so you aren’t blinded by the LEDS. I used the 1/8” (3mm) 2-color black/frosted from inventables which makes such nice backlit signs. 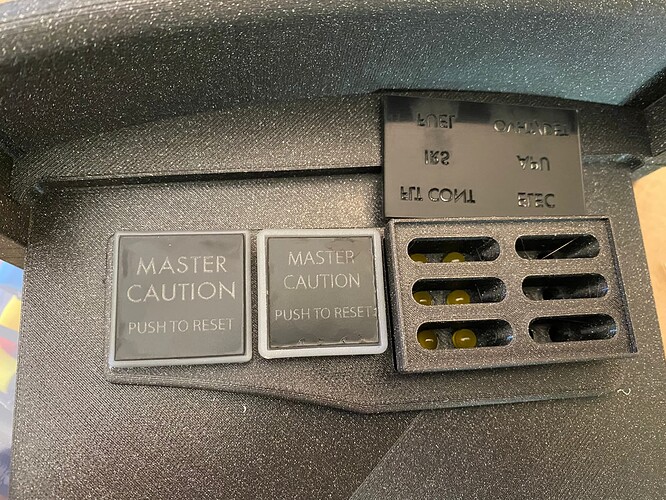 image1920×1440 525 KB
Note: I removed the diffuser between the LEDs so you can see the LEDs inside. Note that entire 6-pack is a giant button (actually a pair of buttons to provide stability). Note the smaller buttons haven’t been painted yet. 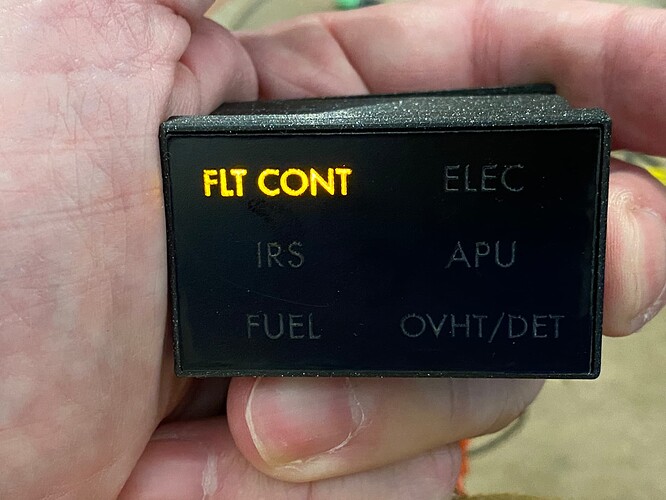 image1920×1440 165 KB
Test with one indicator turned on (when not zoomed in the slight ragged edge of the letters is invisible to the naked eye). 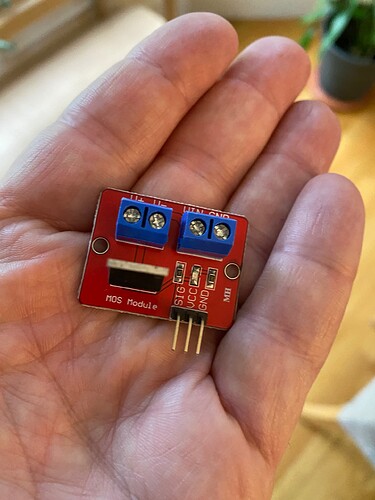 As a suggestion, when you engrave something, after the engrave pass completes, use the exact same outline that was just engraved and do another pass with score. It’ll draw a line around the engraving and “sharpen up” the edges of the engrave.

Thanks for sharing this journey with us. We benefit along with your son.

Good suggestion. Not sure that double sided acrylic won’t cut with a score pass (might have to do a custom setting) as it is 1/16” acrylic. But maybe a score at like 50% normal will work to smooth the edges

Please tell me we are going to see the complete project when done!

Honestly the slightly ragged edge looks quite authentic to me - but I’ve never been in a plane that was fresh off the floor…maybe they’re less beat up then!