This is a combination CNC and laser build. The signs and top light were done on the Glowforge and the rest was CNC and hand tools. I have a few more details to add, but this is pretty much complete. 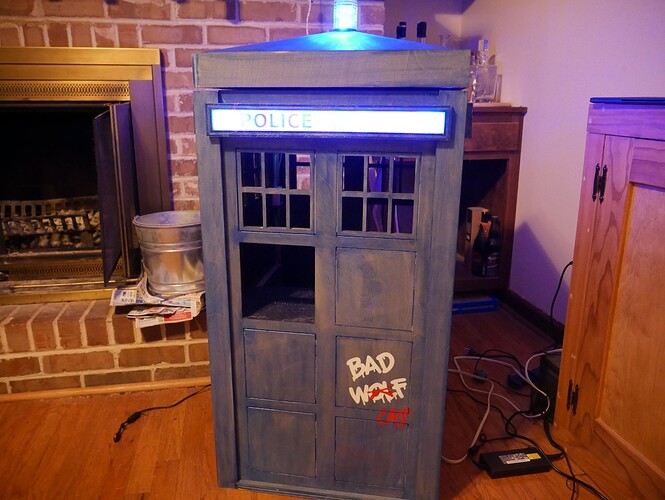 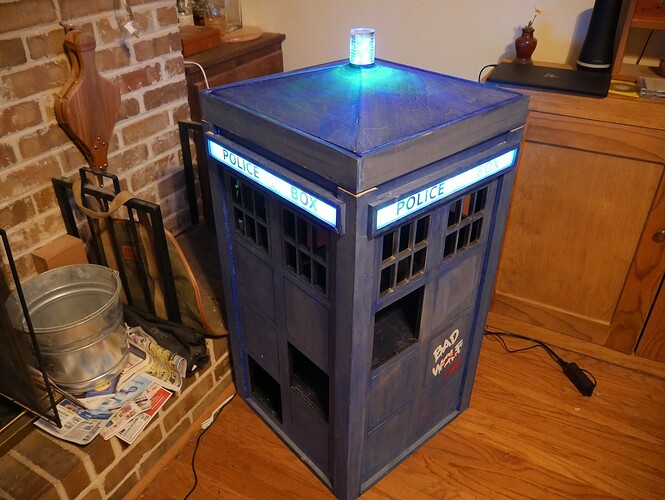 It’s half inch ply and a bit to big even if I did have a pass through, so CNC was used. The cats are currently napping, so we shall see what the reception is. For now, it makes a great Christmas Tree: 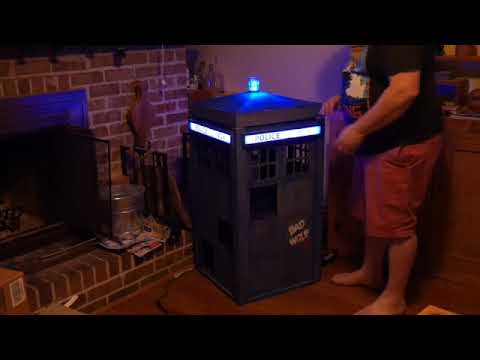 Here’s a closeup of the light and a shot without the lights on. 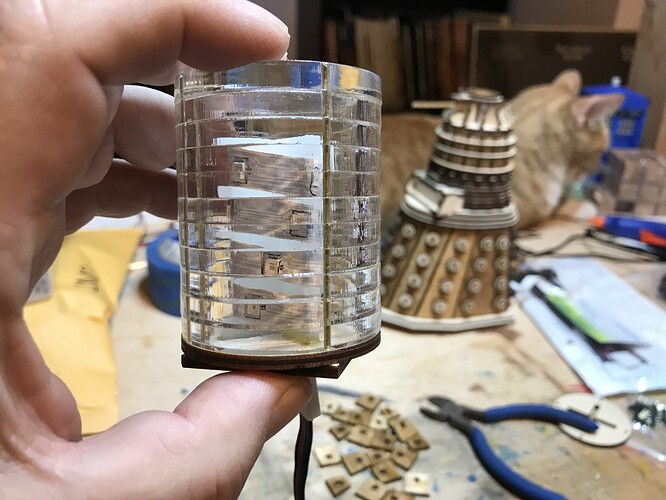 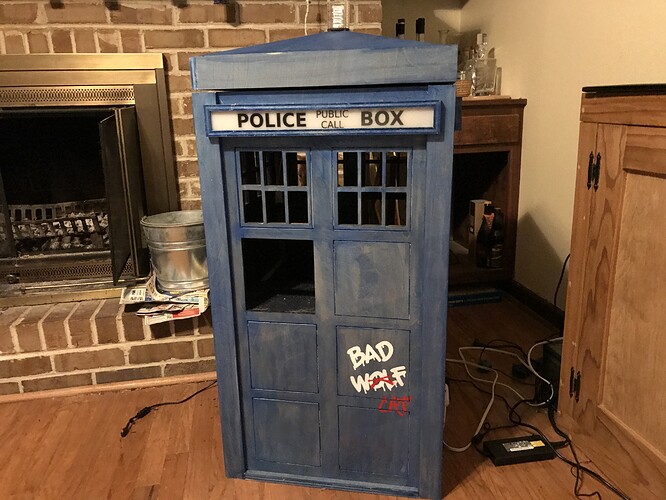 In my next life, I want to come back as one of your cats.

I am a huge Doctor Who fan and that is amazing! I love the BAD CAT. I have to ask though, is there a public file for the dalek in the background? I’m going to have to do some digging when I’m done with work to make me some Doctor Who goodies! Well done.

I wonder if he will mount that on a Roomba? Have the cats chase it around the room…or vice versa.

No surprise, given my avatar, that I think this is amazing! Wow!

The Dalek plan is from MakeCNC (they have some cool SciFi stuff) and very much worth it: 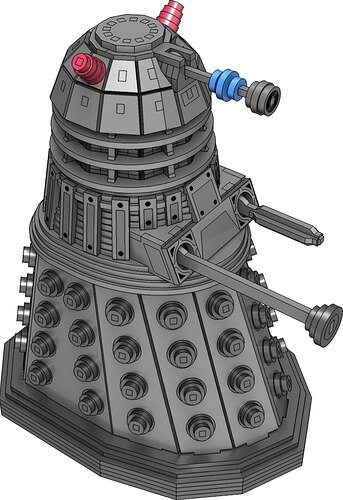 The Dalek - Dr Who

Now on Sale ! The Dalek - Dr Who Ready to cut downloadable Patterns and Projects for your CNC Router, Milling Machine, Plasma Cutter or Laser Machine and Scroll Saw in both Imperial Inch format as well as Metric size for the Global CNC...


It takes about 2.5 sheets of ply and I resized it a bit to get the slots to fit better.

Mine is not yet complete, but soon. I plan on doing a second one with lights because I am weird like that. 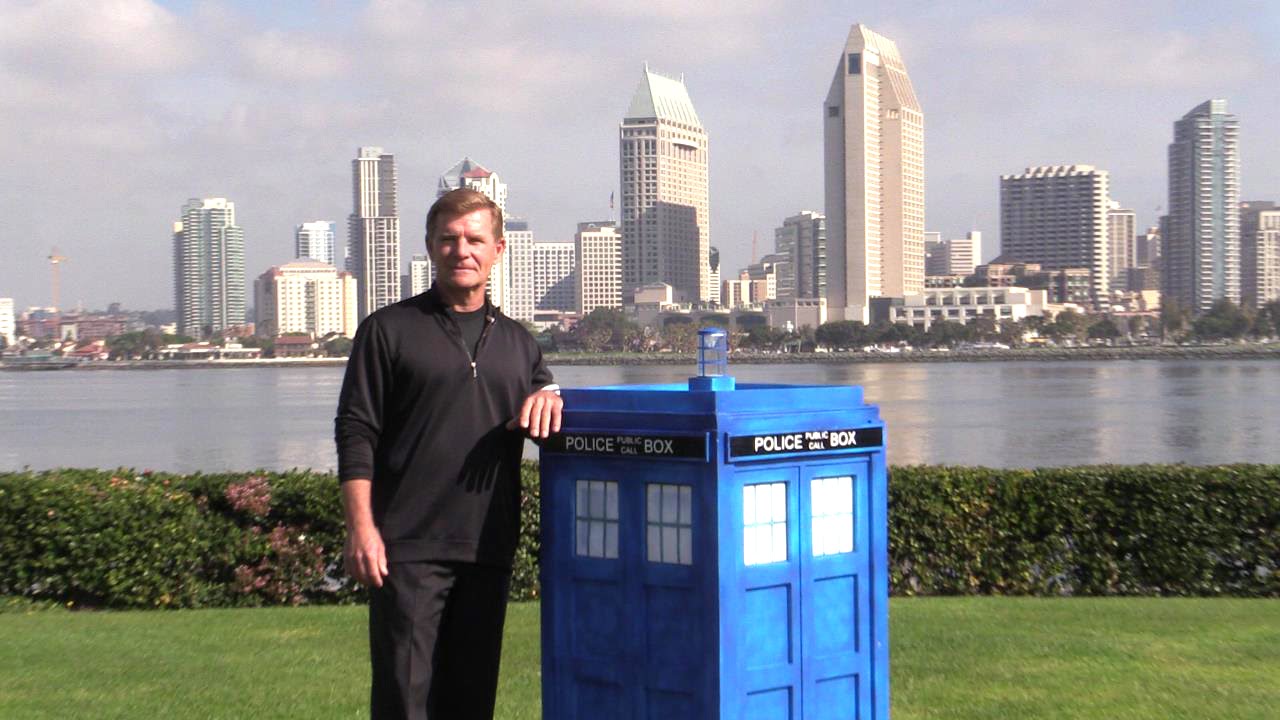 Oh now that’s cool! I would fly that around DragonCon in a heartbeat.

Love Dr. Who, except for the current one. Just doesn’t seem to be a good fit. And not because she is a woman. Very difficult to understand. Oh, and I love the Tardis cat house.

Oh gosh, that’s amazing! The important thing though, is how does the cat like it?

That is… effing incredible!

We once talked about replacing our front door with a TARDIS-looking door. This way when you open it, it’s bigger on the inside.

But… like so many projects… it stalled at talking.

Love Dr. Who, except for the current one. Just doesn’t seem to be a good fit. And not because she is a woman. Very difficult to understand.

100% agree. I’m not thrilled that The Doctor’s a woman. Obviously I have nothing against women. Just that for nearly 60 years that has never been the case. And it seems doing it now is “just to do it.” It doesn’t bring anything to the character. AND, historically, the female leads on Doctor Who were always there to challenge The Doctor in ways that absolutely made women shine. They NEVER had stupid or weak women.

But… Regardless of the gender of The Doctor, this current cast is either totally wrong, or totally written wrong. None of it works for me. I’m nearly 48 years old. I’ve been watching Doctor Who literally for as long as I can remember (Thanks, Aunt Crystal!). Yet I’d practically given up mid-season on the last. Then when that stupid Timeless Child thing came up, I called it quits. I’m done with Doctor Who. It’s an amazingly-disappointing thing to say. Give me back Russell T. Davies or John Nathan-Turner to run the show. Frankly, Moffat onward has been spiraling the show downwards to the pit it’s in today.

Edit ok to expand a bit:

Yeah you said it all. You had sixty years of representation. It’s time for new perspectives and fresh voices. If you don’t like it and move on that’s ok, maybe it’s not for you anymore.

Toxic conservative fandoms are the worst. Let the art mature and change with the world or face irrelevance. Also looking at you AFODs and ragey Star Wars people.

The irony: I don’t even watch Dr Who… but I’ll stand up for representation even still.

Besides. After sixty years of the same thing aren’t you a little bored? Embrace changes in stories, it’s the only way to keep them interesting.

Obviously I have nothing against women

Tom_A has earned the “I Am Enlightened, But…” merit badge.

I suppose it’s not. But, I’m coming from the perspective of “Why would anybody have anything against women?” Who doesn’t love women? My Mom was a woman. My Sister. My Wife. My Daughters. All women. LOL! But that doesn’t mean I want them to play Superman, or Captain Kirk, or Han Solo. This isn’t about the actor. This is about the character. It’s not about representation. Women have always been represented in Doctor Who. Since day 1. Always one or more female leads, always critical to the show in every respect.

After sixty years of the same thing aren’t you a little bored?

Heck no. Kinda like The Simpsons. Watched it 30 years ago, can still watch it today. VERY little has changed.

Embrace changes in stories, it’s the only way to keep them interesting.

Changing The Doctor’s gender doesn’t affect the story. I don’t want The Doctor to be female. We’ve seen female Time Lords, there’s no reason there can’t be another. Regardless, that doesn’t mean Jodie Whittaker couldn’t be the best female Doctor. Maybe she is. Like I said, maybe it’s just poor writing. I thought the same thing of Capaldi. I truely thought he could be the single best “classic Doctor” that we’ve seen in decades, but his Doctor was written SO poorly that it really fell far short of that, and I don’t at all think it was his fault.

Tom_A has earned the “I Am Enlightened, But…” merit badge.

Boy is this off topic, but hey why not.

This is true for you, but to girls and women of all other ages I’d imagine it’s very different.

Representation is more important than we (40s ish white men) generally understand. Even now as I make the case for it, I know deep down that my understanding is academic. When a visible minority gets a high profile role in the arts it often elicits a visceral reaction from that group. I’ll never understand what it feels like but I do see how important it is for those groups, so I make room for them.

Actually women outnumber men. They have just been treated like minorities since forever.

Man it’s perfect that you started that reply with “actually”.

Q: how does a white man get his water?
A: from a well, actually.