I’ve browsed the forums about this issue and have seen all of the suggested things to try. I have done all of those things (setting it up on a different network, trying a mobile hotspot, etc) and I’m still having problems. I did see in a thread that there could be possible local interference, but no examples were given of what that could be. I would have asked in said thread, but it is long since closed

So… any idea what could be causing local interference before I start to panic?

A little history: We’ve had the Glowforge Pro for over a year and haven’t had any connectivity issues until the last 2 months or so. I’ve used it nearly everyday for work and it just suddenly started dropping connection to the point where I will troubleshoot for hours and might get absolutely nowhere or it will start to work like there was never a problem. In the last 2 months, nothing new has been added to our network and as I mentioned above, the issue persists when it’s on it’s own network as well.

Do you have neighbors? Maybe someone nearby has something new that is interfering with your network?

Many neighbors sadly haha. I have definitely noticed more networks popping up locally. Is it possible a network booster could be enough to alleviate the issue?

I’m not very tech savy but one thing you can try is a different channel on your modem. There are some techie people on this site who will offer other suggestions when they read this.

A neighbor who simply installed a new router may be stomping all over the channel yours had originally used.

There are apps to scan your environment (I use NetSpot on Mac) but that’s beyond most general users’ skill level.

@jessnon93: As an enthusiastic user of WiFi since it was first introduced at the end of the 1990s I can tell you with good authority that the only “constant” regarding a given WiFi network is that its behavior will be far from constant over time.

Not including my Glowforge, which is off right now, here’s what my heavily used 2.4 GHz Google WiFi mesh network looks like… 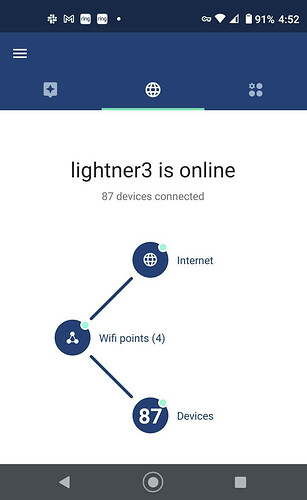 Over the last 5+ years I’ve had to replace two of the Google Nest WiFi access points (“pucks”) in my mesh network. Both slowly lost their range and degraded to the point they became unusable.

So, claiming that nothing has changed over the last 2 months, even if it is a fact, is not going to help diagnose the problem. It could be local interference from your neighbors or it could be that your WiFi access point needs “renewal”. Moving the access point and the Glowforge closer together is a good first step, if possible. Using your mobile phone as a “hot spot” in place of your access point is another good test. Buying a WiFi "range extender can help in some cases, but IMHO that usually is a “fools errand” that tends to ignore the real problem—an ageing WiFi access point.

I’m sorry that you’ve run into persistent trouble with your unit’s connection. Thank you for letting us know what you’ve tried so far, including that you already tried a mobile hotspot.

As @beerfaced mentioned, in your router’s network settings, check the channel you’re using for the 2.4GHz band. Trying a different channel may provide a more consistent connection if there are many other Wi-Fi networks nearby.

Regarding what you may have read in other forum posts about physical interference, while rare, sometimes objects that are nearby the Glowforge can interfere with its signal. Things such as a lot of metal or glass can sometimes be a source of interference. The Wi-Fi antenna for your Glowforge is located in the right-hand side of the unit, so objects close to that side of the unit are more likely to create an issue.

If you’re unsure, our team would be happy to look at photos of the environment your Glowforge is set up in to check for possible sources of interference. If you’d prefer to share those photos privately, you could email them to my attention at support@glowforge.com

We’ve recently announced that we’re switching the “Problems & Support” section of our forum to “Community Support”. Since you started this thread to have a conversation with our support team, I’ll be reaching out to you very soon via email so that you can continue to work with our support team directly.