So let’s say you made a Pen Blank Press. Whaddaya do with it? Well, make a pen, of course! The last one was a King Snake Pen so in keeping with the theme, this one is a Coral Snake Pen. It also happens to be the first pen produced from my new Pen Blank Press, posted earlier today. 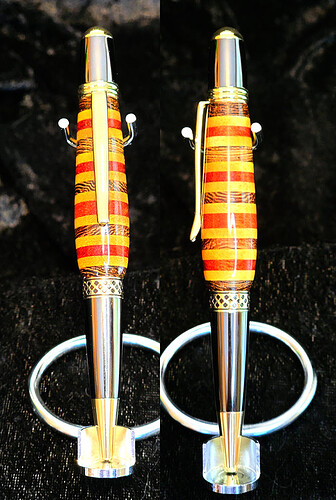 The last pen was made by layering segments to assemble 1/8-inch thick layers which were then laminated together to make a 1x1x5 inch rectangle. This resulted in stripes along the long axis of the pen and, although King Snake colors and patterns were used, the result wasn’t all that “snakey” looking.

This technique is based on laminating discs to produce lines perpendicular to the long axis of the pen, producing something more recognizably “snakey”. The profile is also exaggerated, whereas most of my pens have straight barrels. Of course, any striped pattern would work, including geometric line patterns - which I have an idea for the next pen - and a variety of profile possibilities is possible to accentuate the chosen pattern.

This one is made of wenge (dark), yellow heart, and bloodwood. My hope was that the bloodwood would not bleed as badly as paduk into the lighter yellow heart when sanded, and I was not disappointed.

One of the nice things about this method is the ability to make the blank exactly the required size. Especially since the fine folks at Ocooch Hardwoods were able to provide a selection of woods in all sizes between 1/16 and 1/4 in 1/16 inch increments. That allowed me to adjust the finished length by substituting, say, a 3/16 inch disk for a 1/8 inch disc.

Here is the blank in dry-fit with the center tube that will be used internally. It is intentionally oversized by about 1/6 inch to allow the ends to be squared to the tube after it is cemented in. 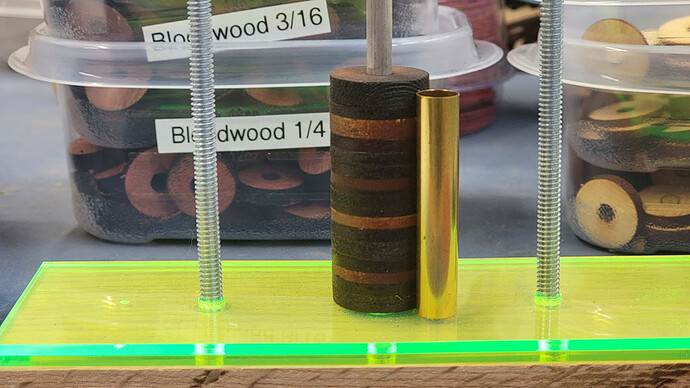 After dry-fit and sizing, the discs are laid out in order of assembly, any laser scorch marks sanded off the faces, and glued up. 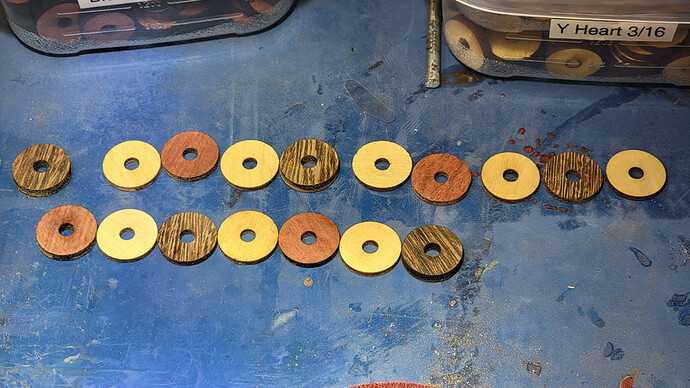 And here we are in glue-up. 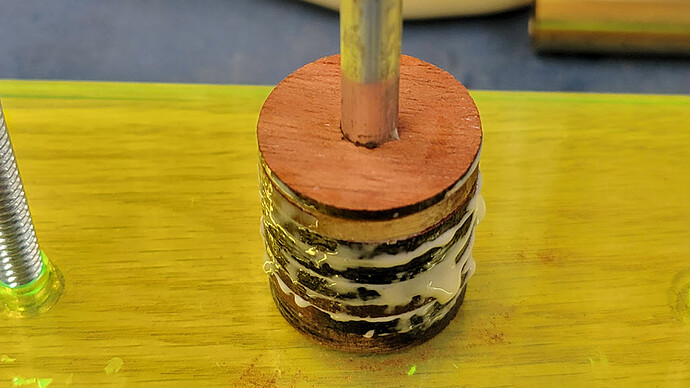 The finished blank, after sanding off glue squeeze-out and laser scorch marks from disc sides. It is subtle but possible to see that some of the discs are 1/8 and others are 3/16 thick. 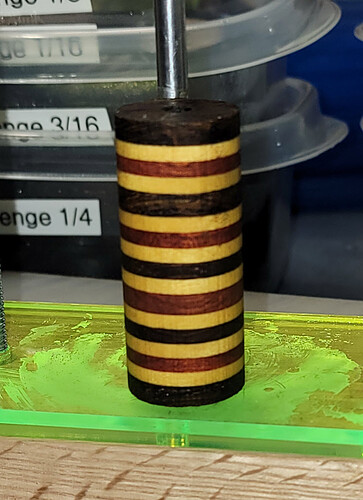 The jig I used to make this is presented in the Pen Blank Press topic.

Thanks! As soon as I finished it, it offered me an apple. Maybe I’m done with snake pens.

I read the headline and wondered why you needed to make snake pens. Maybe start a captive breeding program? After all, aren’t some of those little guys endangered? Oh…that kind of pen!

Lovely, and the writeup is great.

I read the headline and wondered why you needed to make snake pens.

It is a causality cascade:

The main one of these in question would, I believe, be the first one. Do I need to make pens? Well, I work in a world where people who know IT security deeply must dumb it down to checklists that non-specialists can use. The checklists then become laws and industry standards. Then people with little or no training in security implement them.

Imagine passing a law that all doors must use deadbolts. These are so much more effective than keyed doorknobs that it makes sense at first glance. But then in practice people put them on bathroom stall doors that can be crawled under or climbed, they put them on gates, and even put them on car doors because those are, well, doors after all and it’s the law, right?

Then the auditor comes along and asks “Do you use deadbolts on all your doors?” The answer is “yes” and a certificate of compliance is issued, even though the gates and bathroom doors are no more secure and the design of the car doors was actually compromised making them less safe. I work in IT security, not physical security like door locks, but that’s pretty much how IT security works. I spend my days explaining why a deadbolt on a gate doesn’t make it more secure but doing it anyway because it passes the audit.

To put this in perspective, this is a world that is so screwed up and surreal that someone invented a technology to move messages between applications, named it Kafka and the IT community took one look and said “Seems legit.”

So I contend that the desire to make something practical and beautiful that I experience when my work day ends qualifies as “need” and not “want”. It is also my belief that since this need is driven by what I experience at work, taking inspiration from snakes was inevitable. 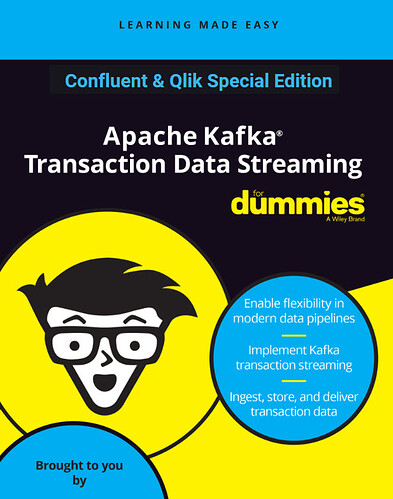 A lot of work, but a gorgeous result!

Nice tip! I love padauk but it does bleed badly!