The phone rang. A client wanted 300 USB wine bottle corks with their logo lasered into the ends and I had 5 days to do the job. Blimey! 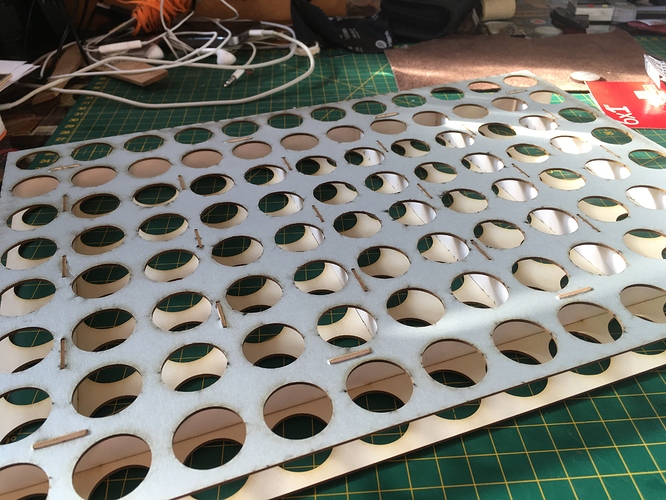 This jig gave me a chance of getting the logo spot on. 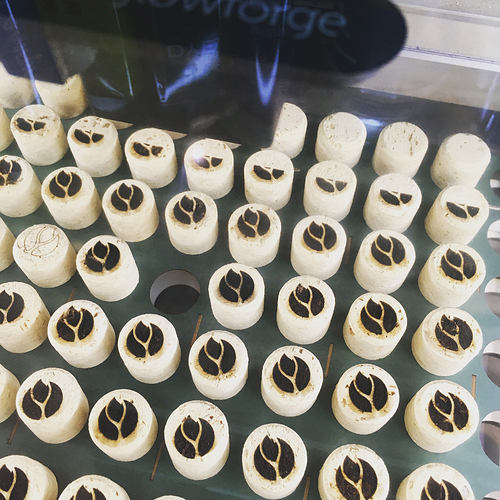 Fortunately I could laser one end, then turn them over and do the other end, cutting the corks in half after to give me two caps per cork.

After that, I had to create a jig to hold the lasered pieces on my drill press so I could drill out slots for the USB gubbins to fit into. The constant repeating actions gave me cramp so if the job happens again, I’ll design a better hands free jig. 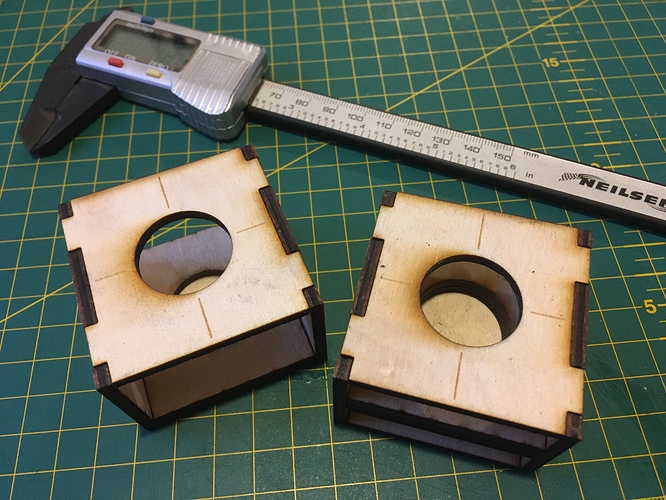 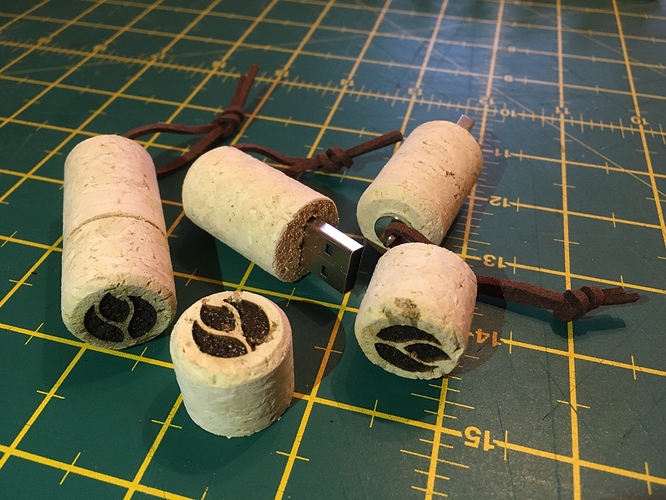 Having the Glowforge makes jobs like this so much easier, never mind the ability to engrave logos etc.

Gubbins. I love that word, adding it to my vocabulary post-haste!

Assuming these are USB thumb drives? Hopefully they don’t get ruined when the wine hits them. Or peeps use a cork screw to get them out of the bottle…

I would think the wine would mess with the electronics, but who knows these day!

That was not easy. My customer had ordered from a supplier in China, but they reneged on the delivery date so he called me.
The USB hardware came from a branding specialist not far from me in the UK who happened to have enough surplus stock from a cancelled order.
All 450 corks came from Amazon.

Wait, so you inserted the usb into the corks yourself?

How did that go?

Yup. I like a challenge! Having made a jig to hold the cork upright but with the ability to slide it sideways, I drilled down with a 4.5mm drill bit into the longer pieces of cork, then slid the jig right and left a bit (I put stops on the jig) to hog out the material. The USB circuit board part then pushed in, friction holding it in place. The lids were slotted using a 5mm drill bit for a little slack so they fit on but didn’t pull the circuit board out when removed.

So question about your design - did you copy the design 96 times in the software, then export it to SVG or print to PDF?

One thing I hate is taking a design and copying it multiple times on the GF interface for an engrave. I had to do a bunch of coasters and did this and the time to engrave was multiplied by the number of coasters because it couldn’t just read / engrave left to right, it did each one individually. If I make the design in AutoCAD with X number of objects, it will usually do it correct. The problem is many times I need different shapes / pieces in an engrave and if I plop them down in the interface it sees everything as an individual and calculates / engraves individually, not starting at the bottom, going from left to right and hitting everything on that “line”. If that makes sense.

If they could fix that…

Very cool - I hope they paid out the nose for the rush job…and they’ve built in extra stock for the people who do put them in their wine bottles!

Having already drawn up the jig to hold 96 corks at once, it was simple to step and repeat the logo the same way. Initially I just did this as another layer in my Illustrator file then saved it as a PDF without the other layers on. One image had an outer circle that lined up with the jig artwork which I just told the glowforge to ignore. It took a bit of fiddling but went well.

If they could fix that…

Oh I made sure my price reflected the urgency! The order at first was for 500 - glad it got reduced as I don’t think I’d have managed 200 more in the time.

DB’s answer above is correct on how to solve it as things are today, but you’re actually right in thinking they could fix that. With all the cloud processing, it would be trivial to determine if a bunch of disparate bitmaps or vector shapes (or even a combination of both!) intended to be engraved could be combined and sent down as one object vs. many.

I’ve got an awful memory but I’m sure I grouped the logos for the corks in my illustrator file before saving as a PDF. They all imported to the GF as one graphic.

If they were all in the file and the same stroke color, they would be treated as one in the GF UI.

My response above was regarding not having them all laid out in the source file, and copying/pasting and arranging in the UI - it treats them all individually, which slows things down.

That’s the bit they could fix.

Agreed - and I could do that before I upload the file. But many times with engraves I’m using material where I want to place many items around where other cuts have happened, and I can only do that in the interface after the camera takes a picture.

If I could place, export back out, then re-place that would be nice. But can’t do that.

Ah I see. Yes, being able to step and repeat then group multiple imports would be useful.

I wonder if the drill press part would go easier if you had a USB-shaped bit?

As far as USB give away items go this is so far on top the second placed one needs binoculars to see it.

As far as actually using it in a computer, well maybe not so much, but who cares.