I am back again. Trying to make a printing plate on the glowforge. We used to do these on our epilog the growforge replaced and it was easy. Select stamp mode when sending to the laser and it would automatically engrave the white and leave the black. On the glowforge I can manually invert the colors.

Now for the issue. The other option that got enabled when you turned stamp mode on was shoulders. What this does is give some meat to any protrusions. Without shoulders your tiny dot is a weak column. With shoulders the same dot is essentially a pyramid. Still the same size tip but much stronger overall. How would I go about doing this in say inkscape, coreldraw or illustrator? I was thinking a uniform gradient around everything but I can’t figure out how to do it.

By an astounding coincidence I just this minute finished making a clear art laser stamp that incorporates the features you seek. I was sitting down to write up a step by step tutorial for it. If you give me some time I’ll do that and send you the link. I’ll put it in Beyond the Manual since it will include settings.

Edit: forgot to mention, I did it in Photoshop. It may be possible in vector programs as well but I found it easier to do in Photoshop.

Thanks. (I was not entirely sure if this went here or there.)

There are some posts about this to give draft to the text while you wait for what will be a superb tutorial from @cynd11 as usual.

Out gradient folds in a wider outline around the ismshe you want to reproduce.

Two-Part stamps Made on a Glowforge

If it didn’t occur to anyone, this might be helpful. Rather than engrave the entire “block” around the stamp like this(which would take FOREVER and dirty up the inside like crazy) [image] I created a selection around the stamp - including the slope gradient - and filled it with black [image] Then I saved that just black and white image in the same dimensions as the stamp and took it into Illustrator to do a Live Trace/Paint thing and expanded it to create the cut line This way it engrave…

Just a note: I did not do the two-part thing with final cutting of the outline on the Glowforge because the polymer stamp blanks I use are backed with what I think is a PVC sheet. I didn’t want to cut through that in my laser so I hand trimmed after engraving.

Art Laser Polymer Stamps How To Beyond the Manual

Hey folks. I had need of a stamp saying Thank You for some cards I’m making, so I thought I’d walk folks through the process in case you want to try it. First of all, I’m using Art Stamp Laser Polymer from Jackson Marking Products. I prefer it for my stamping as you can mount it to an acrylic block and see through it to where you are stamping. They do also supply the opaque rubber laser stamp material as well, and you would prepare the file the same way, but your settings would be different …

Thanks. Ill give that a try.

Thanks for the incredible help, @cynd11!

I’m going to note your feedback for our team, @Birdman3131 and then move this thread to everything else to let the conversation continue.

There is a super simple way to taper the features on your stamp - Gaussian Blur.

These instruction are based on GIMP (gimp.org), but should work with any advanced graphic editing program.

Use the vary power based on gray scale option when engraving and the resulting engrave will have a nice taper up to surface that is inked.

If the taper needs to be steeper or shallower, use the levels tool to move the white point of the blurred layer before flattening the image. A white point value between 190 and 160 usually works well.

I use this technique when I’m making my wood block printing plates with the GF. Very small details have a nice tapered base that prevents them from breaking off during pressing.

I’ll have to try the Gaussian Blur method. The method I used was based on Outer Glow but the results were probably similar to what you get with Gaussian Blur.

I like the Outer Glow as well, but with the “More Precise” option, rather than “Softer”, which seems to make a more distinct “ramp” as the gradient forms a more consistent ring around the image to be stamped.

Depending on the size of the stamp though, I’ve found the SIZE and RANGE sliders need to be played with a little, but not much. The 3rd image is the settings i used on the inked stamp image with the shoulders highlighted below. 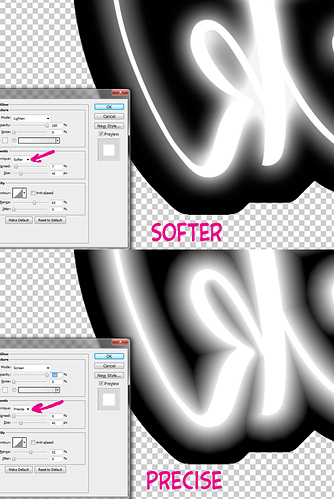 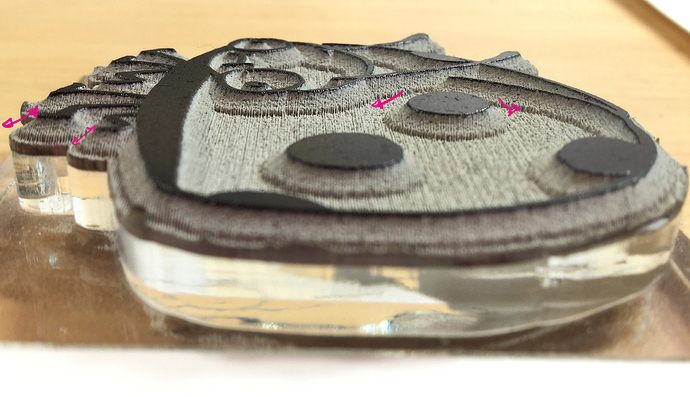 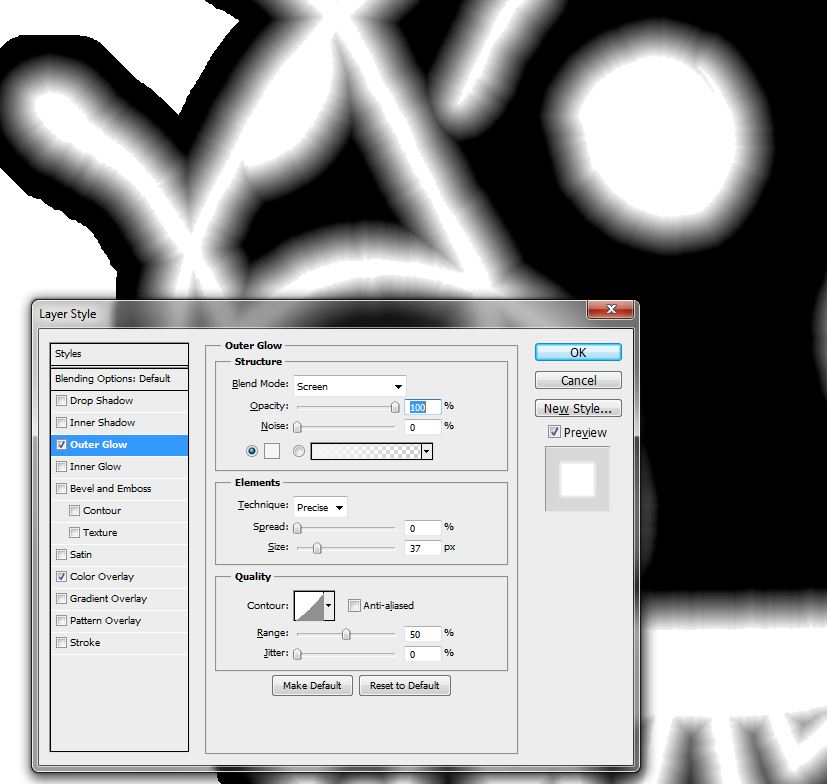 Post some pics of your printing plate(if you can) when you get it made, @Birdman3131 !

@aj_stewped, your second picture is the money shot. It is the best illustration of the technique we are working for. Thanks so much for the instructions and good posts.

I think you might be right—I’ll try Precise next time. Actually I did try it and for the particular size of image I was working on it didn’t seem as good. I guess the takeaway is that you need to fiddle with the settings a bit to optimize for your use case.

I wonder if you would mind posting your note in my tutorial thread so it is captured?

Added - and added a bit more because I realized my files are maybe higher res than most people are used to working in, but it helps a bunch with the final results.

I found the outer glow option in Affinity Designer, but haven’t found any way to duplicate the “elements” and “quality” options yet. Are there any AD aficionados out there who know how to accomplish this in AD? 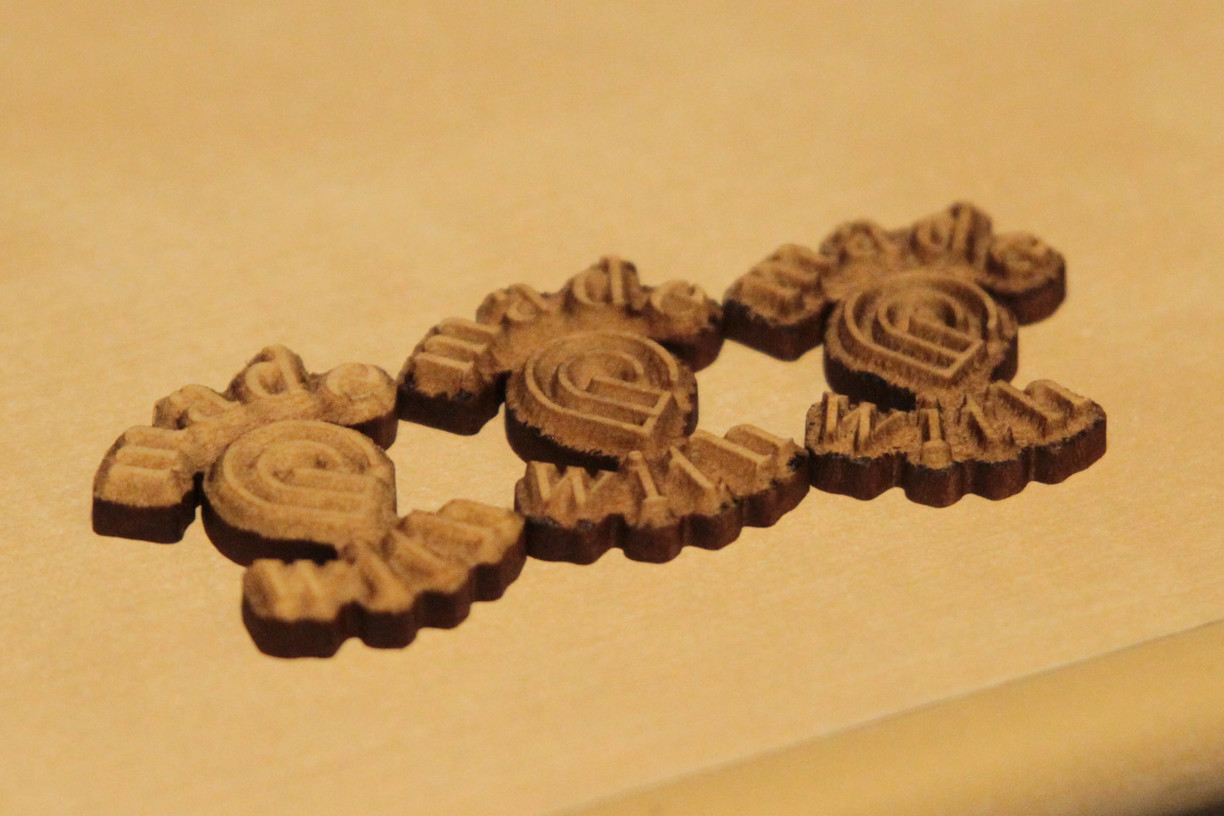 For fellow GIMP users here is the file used to create the middle engrave:
Made on Glow Forge Stamp v3.zip (86.7 KB)

If anyone is interested in having a copy of the .svg file here it is
Made on Glowfore Path v3.zip (85.4 KB)

Ill give it a try monday if I can. Had to put the old laser back up friday to try and get it done. Should be able to put the glowforge back in place monday.