I have yet to receive my Glowforge (Basic). I was wondering if anyone knows how feasible it is to create very big jigsaw puzzles that have dimensions larger than the printable area, i.e. do multiple prints for the same jigsaw puzzle. Would it be possible to align the pieces properly? I know the PRO version has a pass-through feature, but it is quite expensive. In my head it is mostly an alignment issue, but I honestly am not sure, and am a complete novice.

I’ve been playing around with the idea of creating puzzles of long artworks, like ancient scrolls and such.

Yep it’s feasible. I put together a tutorial for it (of course ) a while back.

Splitting a Puzzle with Illustrator and Photoshop

This method could be used to split a file for use in the Passthrough until the alignment function is ready. Generate the puzzle using whatever generator you want, bring it into Illustrator, and split it into two parts. The one I used to create this one uses single lines for the cuts, grouped, compound pathed, and whatnot - I had to ungroup, release compound paths, and clip lines in a couple of places, so it took a little longer. [1puz] Duplicate that one center line so that each section is …

In theory, you could setup an overlap such that multiple prints could piece together. In practice, that would be interesting specifically for the cut and image alignment to get it interlocking smoothly.

So, yes, it is possible.
Effort involved would be significant.
Results would be stunning if you can pull it off.

@jason.fuller0 thanks! I agree, it seems like it will involve significant effort, and lots of trial and error, I look forward to trying this out.

@Jules thank you for this awesome tutorial! Your posts are always so insightful. The solution you have is great in the sense that you are engraving and cutting at the same time, so it will be always aligned, I have a few ideas in which I think this solution will work

Do you have any suggestions for alignment if I would like to have a print version of the art instead of engraved?

Very lightly engrave, use to align gluing picture in place without moving board, then run cut?

I think it should be easy enough to puzzles of any size you like, by chopping it into as many GF-sized chunks as needed. You would have to overlap the puzzle art on each chunk though, and you’d discard the pieces on the border of a tile which would run off the edge of the material.

Another way is to design your puzzle and then use your image editor to break the puzzle into individual puzzle pieces, and then use a nesting tool to arrange those pieces onto as many GF-sized materials as is required to render them all. That way you waste more material because the puzzle pieces aren’t interlocked, but you don’t waste any half-made pieces at the edges of the tiles.

Hmm, if you cut 2 puzzle pieces which are not interlocked in the artwork, do they still press-fit or are there kerf problems?

These are 500-piece, 18x20” puzzles without using the passthrough. 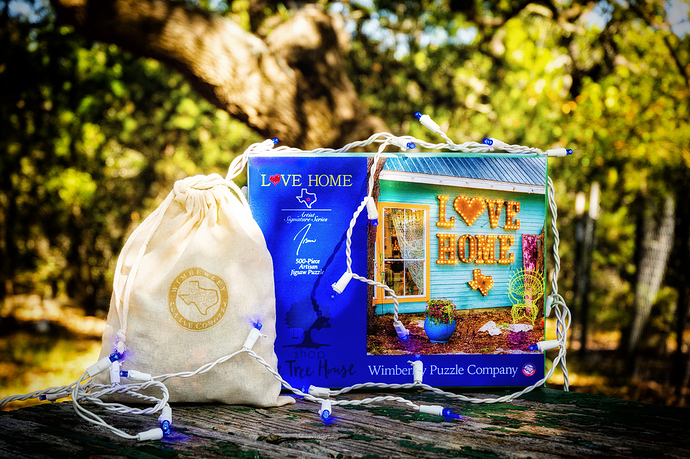 Do you have any suggestions for alignment if I would like to have a print version of the art instead of engraved?

You know who might have an idea for that is @jbmanning5 . He does those, although he does use a Pro for the large sized puzzles.

Theoretically, if you kept a set size for the image, you could use something like the Pro alignment jig inside the Basic to get pretty good alignment with a couple of indexing marks. Since you are cutting it up and not trying to just print on one long piece of material it might work. (Yes, it would definitely work - you’d just align the top to the top, and the bottom to the bottom. Would need to print the image twice though, and paste it to two sheets of material before cutting.)

And he chimed in while I was typing…chuckle!

And he chimed in while I was typing…chuckle!

I basically use a process that you came up with a while back while we were brainstorming. It’s arduous the first couple of times - but the whole puzzle making process is because many steps are involved from the initial printing, trimming, gluing, cutting, cleaning, boxing.

I’ll try and document some of the process (I know - I’ve said that before) but I have to run into town to pick up another pallet of boards to make puzzles from.