I have question - i have tried to ready Glowforge customer services for more than 3 day still not have received a response, My internal exhaust fan quit working - i need to get replace asap. can you give me a better way to contact - i have called and emailed
thanks Bj

You should have received an automatic email response within 24 hours of contacting them. If not, check your spam folder. Currently the only way to contact Glowforge support is email.

They only support contact thru the “Contact Us” form on the support page, calling or emailing is undermined. That said, it also takes them several business days to respond, and it is the weekend (they don’t work weekends) so give it a few more days.

As eflyguy said…get an inline fan. It is worth EVERY penny. It will be so quiet, you can actually listen to music or carry on a conversation while the Glowforge is cutting away.
It is big, but super quiet. I highly recommend this one. You will have to get some adaptors to adapt the 6" to the 4" hose (also sold on Amazon).
Amazon.com: AC Infinity CLOUDLINE S6, Quiet 6” Inline Duct Fan with Speed Controller - Ventilation Exhaust Fan for Heating Cooling Booster, Grow Tents, Hydroponics : Patio, Lawn & Garden

Did you remove your fan. Or leave it in machine. I just bought the fan you suggested. Just waiting for it to come in thanks for the information
Bj

Leave it in. When you run the eternal fan, you have to disable the internal one.
In the GFUI, click the 3 dots on the top menu, and turn ON (green) the “Glowforge air filter attached” button (even though you are using an external fan and not the GF filter). 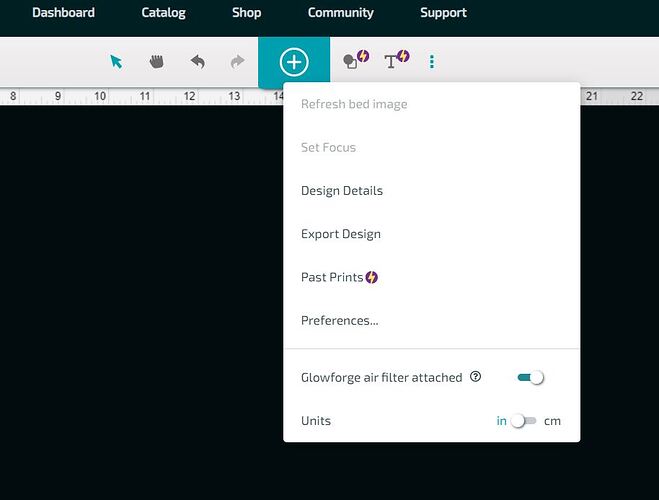 External fan914×693 28.9 KB
. It is sort of backwards to me… you would think it would say “Turn Internal Exhaust Fan OFF” or something.

You will need to adapt the 4" hose connection used by the Glowforge, to 6" along the way. I used these, but they weren’t tight, so I simply wrapped duct tape around the outside of the external fan a bunch to make a tight fit for these adaptors.
Hon&Guan Duct Adapter, 6’’ to 4’’ Ducting Reducer Increaser Connector for Ventilation Systems (150 to 100) - - Amazon.com

I wrapped the Outside of the fan part with duct tape to basically make it slightly larger so those adaptors would be tight. This is what I meant. It is definitely southern ingenuity… but it worked for me and I didn’t care what it looked like. 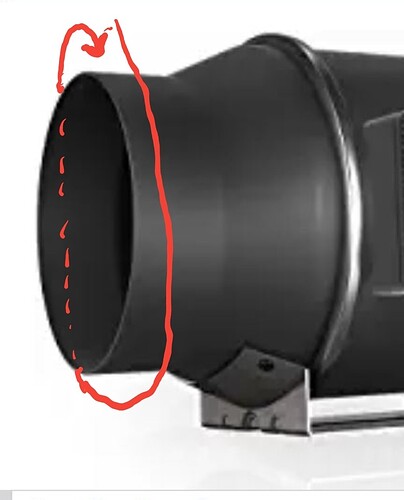 Or you could just buy an in-line fan with 4" couplings. That’s how I did it… you only need about 250CFM from the fan, it doesn’t have to be that big.

Many 4" inline fans do not move enough air under load to replace the Glowforge’s internal fan. Most 4" inline fans do not reach their advertised CFM, as that number is measured in open air, not with the static pressure of the ducting and the Glowforge attached to it. I’ve seen multiple people buy 4" inline fans and then have their machine routinely overheat and not clear smoke effectively because it’s not moving enough air through the case even at the fan’s full speed. The bigger the fan, the more air it can move, and the quieter it’ll be when doing so. For these plastic inline fans, 6" is probably the smallest that will work for many.

I specifically chose this kind of fan because it’s really a “centrifugal compressor” not a “fan”. My thinking was that it would not lose performance as quickly as a bladed fan due to the buildup of debris from the laser cutter. In a bladed fan, as debris builds up on the blade airfoils, the airfoils become less effective. With centrifugal, “blades” aren’t moving the air, “vanes” are spinning it. No airfoil shape to dirty-up. As crud builds up on the vanes it won’t have an appreciable effect on how well they work. 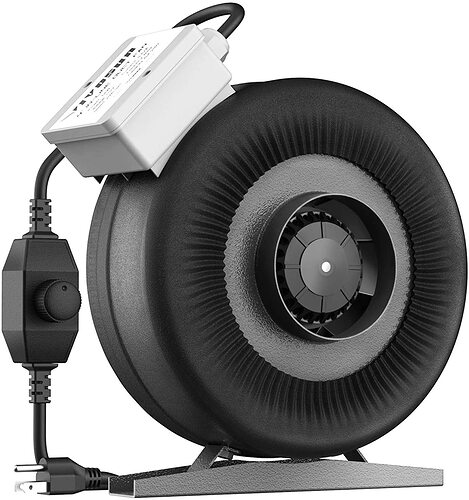