Yes, perpendicular can be a problem. Well, I’m baffled that you are still having trouble with such great alignment. It’s better than my Pre-release!

Try putting the paper on something that is at least .01 thick to give the layout camera a fighting chance? Then use the total height in the material height setting. I tried a piece of plywood and that helped a lot. When I do not set the height, or if it is off, then the alignment suffers significantly.

Nope… that didn’t work either.

In fact, I’ve been testing with the crosshair svg above in different locations on a random print-out… and the further you get from center, the worse the registration becomes. It seems it’s fish-eyeing and can’t be predicted.

@dan is this a normal thing to be expected for the time being? Is a fix in the hopper? Someone mentioned “Precision Alignment” is in the works?

I wonder if the Print and Cut tutorial would help? I’d taken it down because @cynd11 's method is a lot easier to use, but so many people seem to want to do P&C, and it worked pretty well with the poorly aligned PRUs when I wrote it.

(I like the idea of sticking it up on a piece of scrap ply though too - that would probably help.)

Let me know if you want to try it…if these other methods don’t get you the result you want.

I tried the above where I put my paper on top of a maple hardwood 0.125" board… same problem.

The more I think about it, the more this completely breaks the usability in most scenarios for the Glowforge. I’d planned to cut some custom dice later on… but if the images can’t cut in a pixel-perfect, predictable location, this becomes an impossible task for me.

Unless I’m doing something fundamentally wrong… unless you plan to cut/engrave on raw material where all placement is determined purely by artwork, the Glowforge is too dangerous to use to customize anything. =(

I would send an email to support@glowforhe.com.

Well, give this a try before you give up on it:

Hmmm… what worries me is if that works and that is what is necessary to do a simple print/cut off existing artwork.

We’ve had rather lengthy discussions about it here on the forum. The kind of precision required to work with a Print and Cut file is going to be hard to achieve with an overhead camera aligning visually. (It’s gonna be best right under the camera, and worst at the far edges.)

What you are doing is creating a sort of three-point registration manually by following the steps in the P&C tutorial there. Once you get it set up it’s not bad, but it does take some time to get it aligned.

A three-point registration is in the hopper for future development though. This is just to get us by until then.

Hmmm I see… do you know if there’s a way to determine the prime location below the camera? Or you just have to eye-ball it through the glass?

I just try to get it under the camera, looking down. (Very rough.) It’ll be close enough.

I would send an email to support@glowforhe.com.

I’d email it to: support@glowforge.com

You’re very welcome to email support. However, if you open a thread in Problems and Support, it will get the same service (guaranteed response) PLUS all the sorts of useful help you see here. But it only applies to threads opened in that category, and moving a thread to that category doesn’t alert our support team.

I’m moving this to Problems and Support, and sending a note to @rita so her team doesn’t miss it!

Ah, thanks! Didn’t realize that.

More testing… I stacked the paper on some Cardstock to get a more uniform 0.02" thickness. This is a straight trace and print… 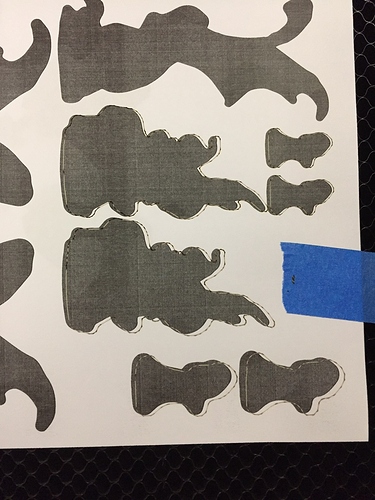 That’s a full 1/16" off… is anyone else getting this kind of result?

Here’s another test: this cardboard is 0.25" thick… I scored the “2” first, but set the thickness AFTER the artwork was laid down. The “1” was traced/scored AFTER the thickness was already set. I did both scores without moving the cardboard in the bed… any ideas what went wrong/right? 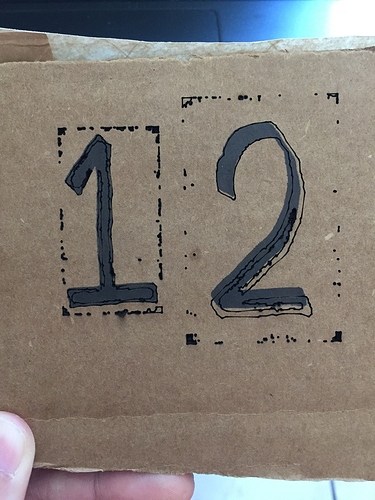 The “1” was traced/scored AFTER the thickness was already set. I did both scores without moving the cardboard in the bed… any ideas what went wrong/right?

I always set the thickness first. It seems to help with focus and locking things in better. I figure they put it in the upper left corner for a reason - first thing to do before any operations setting

I’m sorry my print and cut method didn’t work for you. Maybe you should try @takitus’ jig method: Tutorial - Batch Production With a Jig

Just make sure that you lay out your print file exactly the same as your cut file.

We’re still improving our layout and alignment, so your print may appear offset from where you put it by up to a quarter inch. For the most accurate alignment results:

@Jules and @cynd11 posted some helpful suggestions you can use while we work to make alignment better for everyone. I’m going to close this thread - if the problem reoccurs, go ahead and post a new topic. Thanks for letting us know about this!