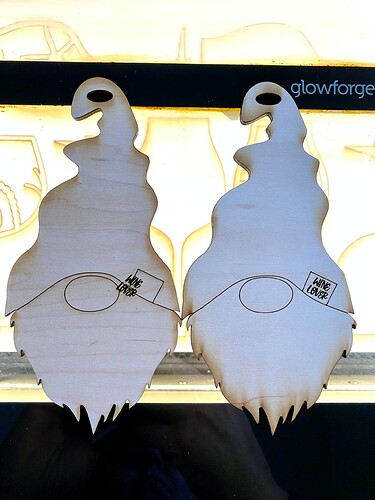 IMG_79391920×2560 314 KB
My machine is cutting through properly and straight, but etching is all over the place. Scoring seems okay too. Everything is clean including the rails the pulleys ride on. Is this lenses or pulleys? Just looking for a place to drill down in the machine as I’ve been looking but can’t seem to identify a problem. I have replacement lenses, but I don’t see any issues and I don’t want to do all that unless it makes sense to try. thanks so much!

Updated: sample of the engraving being off - it isn’t the file, I’ve confirmed on another laser. I have noticed also the scoring is a tad off but the engraving is way off. The cutting is fine though. Correct product on the right, messed up on the left. I can put in a service ticket, but I’ve had these for years and I must be just blanking out on what to fix here. thanks again for all the assistance.

Probably want to include some pictures of what you believe to be a problem so we can better evaluate. Though if you want actual GF support you’ll want to email them as they no longer monitor the forum.

By etching do you mean engraving? What does “all over the place” mean. Can you post a pic of what you see? If the machine is scoring and cutting correctly there is nothing wrong with the belts, wheels or gantry or they would be off as well. It could be your file. Have you tried the gift of good measure? If it works then your file is the issue.

I’d presume something sticking or slipping in the belts - that it’s worse for engravings might be because you’ve got the speed set higher for those so any sort of slip will be exacerbated.

that makes sense … okay, I’ll look into the belts. thanks so much. I didn’t think about the speed driving the difference.