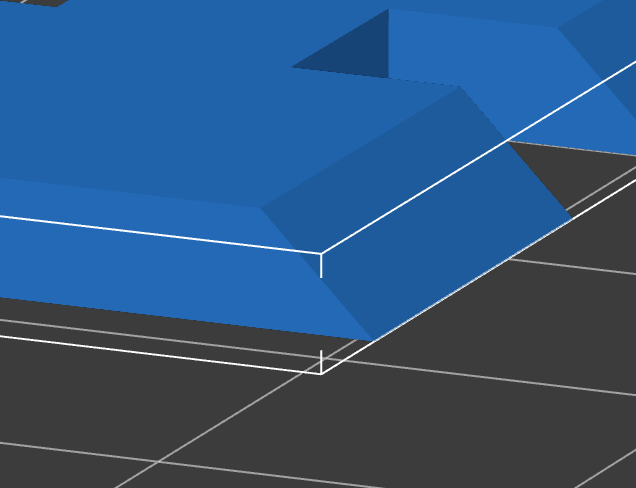 Rather than print a rather large flat piece on my 3d printer, I’d like to just cut a piece of mdf/birch plywood on the GF. The only issue is that the edge of the cut has about a 45degree angle. Is there a way to use engrave settings to ‘fool’ the GF to stairstep down and create an angle cut?

Has anyone been able to figure out how to make something like this work?

(One thing I did think of was to print the angled piece and then figure out a way to attach it to the cut piece), but I’m too lazy. I’m trying to work smarter not harder.

Stained Glass Lamp with Mitered Corners Made on a Glowforge

Some of you may remember the teaser I posted a few days ago about miter cuts on the Glowforge. I finally scraped together enough “me” time to finish the project. I’ve been working on it a long time! (@marmak3261 saw parts of it when he visited last week). First, the finished project, then I’ll show the progress photos in case anybody is interested in trying something similar. [image] [image] Total height is 4.25" and the “stained glass” panels are 2" each side including the walnut corne…

And there’s also this (beveling mat board with an engrave):

Custom Mat for Photo Frame Beyond the Manual

Just fooling around with some crappy waste matboard to see if I can get a nice bevel on a custom cut. Turns out I can! Not perfect, and the cut edge is dark instead of light, but very usable. This is the first iteration, I already know of some changes I want to make on the next try, but thought you’d like to see: [FullSizeRender][IMG_5323] It’s hard to see the bevel in the photo, but it does look pretty cool. This one is shallower than the standard 45 degrees, that’s easy to fix. I’m pla…

I’ve done something vaguely similar using a grayscale height map to vary the engraving – in my case I was generating a crown gear, but the principle is the same. One thing I found, incidentally, is that the engraved “miter” can be a bit nonlinear because of how the laser works – rather than a diagonal, I tended to get more of a curve.

That can be adjusted by fiddling with your power settings and adjusting the grayscale, but it’ll probably take a few tests to get where you want to be, and you’ll need to re-run those tests for each new material.

is that the engraved “miter” can be a bit nonlinear

Also it will vary based on the material. With plywood each ply might have different engraving characteristics, and even within the same layer the grain of the wood might make a difference.

So with that in mind you’ll get best results with really uniform materials like acrylic of MDF.

It all comes down to your tolerances. If you need extreme precision you won’t be able to beat a mitered saw blade. You should be able to get highly precise and repeatable results by combining laser cut pieces and custom Lasered jigs that you use with a conventional beveled saw.

It’s not a simple issue to solve for in any case.

You should be able to get highly precise and repeatable results by combining laser cut pieces and custom Lasered jigs that you use with a conventional beveled saw. 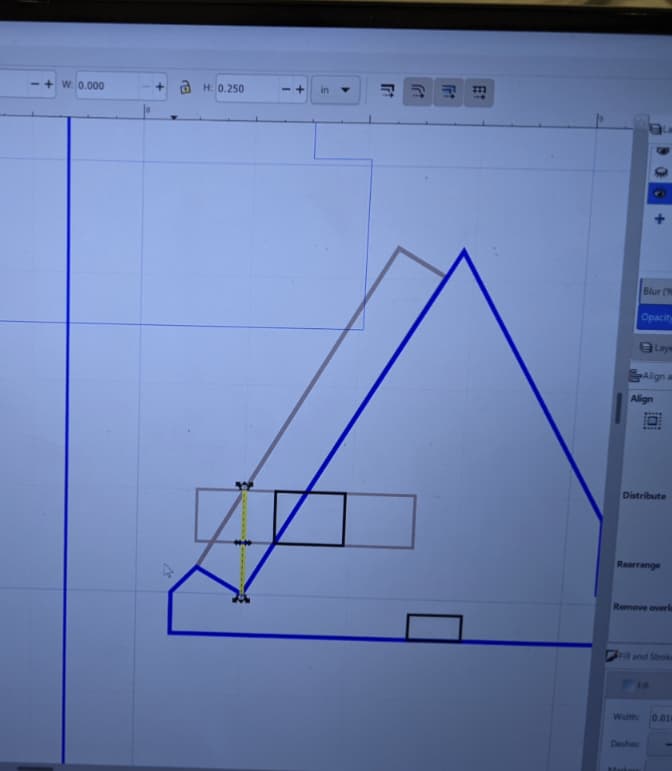 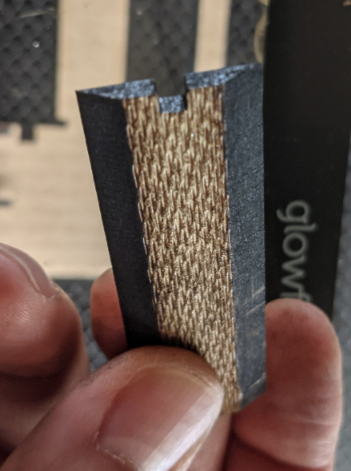 The first image is the side profile of the jig (blue) with the yellow line representing the laser cut. The second is the result of beveling both edges.

It wasn’t hard to dial in the cut, and consistency was decent.

I put a bit of foil on the jig to prevent cut through.

What was your limit in terms of piece width? Did you try to figure out where it was, or was it for a specific purpose so you got what you needed and that was that?

Also that’s your hardboard that you use for prototyping, yeah?

I did these with the tray on place. In general of course your limit is based on the angle of your cut and the width of your piece, basic triangle math. It’s amazing how lazy I get with math when I can just “draw the thing” and get the answer… That’s what I did here, and that decided the width of my piece.

And yes, this is the .125in tempered hardboard I like for prototyping.

I completely agree. Trigonometry is fine, but just mock it up in your vector program and let it handle all that.