I want to add a design to a cutting board but I don’t want it engraved since its going to be used and don’t want food getting in the engraving. How can I just scorch or just burn an image without doing a full engrave?

“Scorching” or “burning” are engraving.

You should not prepare food on an engraved surface unless you seal it.

I meant a deep engrave I guess. new to this don’t know all the terms

Deep or shallow makes no difference. If the laser has marked the surface, it should not be used for food prep.

With a sealant, it can be used for serving, as a platter.

Yes, as other said, if you impact the surface of the cutting board, it should not be used for food prep as those spaces will be extremely prone to trapping bacteria. There are food-safe epoxies out there that you could use to fill in the engraved space, however. 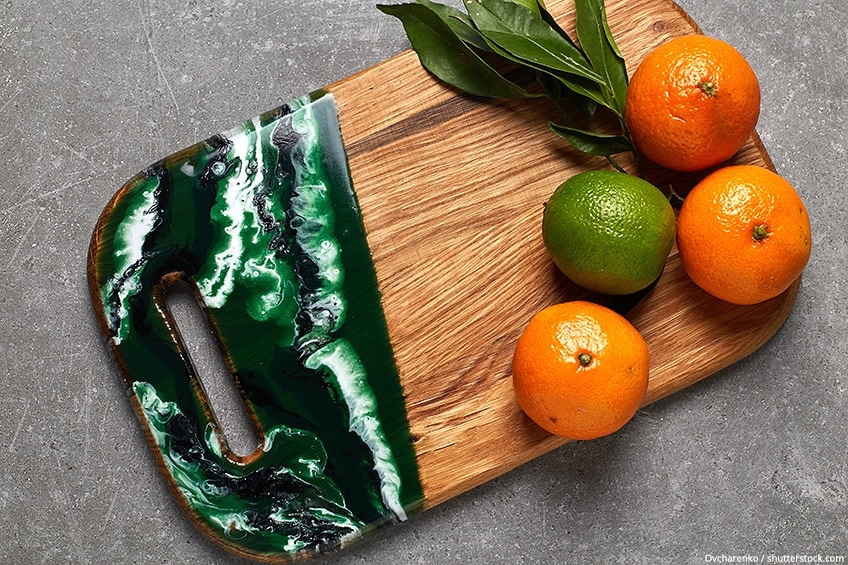 In this guide you will learn how food safe epoxy resin really is and what you should consider in this context.

what about board oil. or is an epoxy absolutely necessary to use the board?

I think the point is that any sort of engrave introduces crevices where bacteria can grow. Epoxy would seal those so it’s not an issue. Most people just use the opposite side of the board and leave the engraved side for decoration.

Oil will protect the wood but it won’t prevent debris from food getting into the surface.

The point of epoxy is that it fills the voids and creates a food-safe surface - although it’s not generally very durable if it’s going to be used as a cutting surface.

If you want a design on a cutting board, put it on the side that won’t be used, or make it purely decorative…

The oil is also wanted, but isn’t sufficient to fill the many crevices created in the wood that will trap bacteria. You want a smooth, flawless surface as much as possible.

You want a smooth, flawless surface as much as possible.

Which will begin to be marred, sliced and cut up with the first use.

Wooden cutting boards are not the germ factories most people worry they are. Cutting board oils and the natural properties of the wood tend to make them non-conducive for growing bacteria. Nothing a good soap & water wash won’t fix (which is why you want the oil - use something like Howard’s Butcher Block oil & conditioner).

Of course, that with normal use - not smearing it with raw poultry parts and then followed up with cutting the veggies. But washing and drying will take care of any bacteria “in the crevices”. They’re far more likely to be a problem when driven into the sliced wood fibers when the knife cuts the surface than they are to be an issue in the depths of an engrave. And it’s easier to use a brush on the laser engrave than the slices and cuts in the surface from using knives on them.

If the laser has marked the surface, it should not be used for food prep.

While @eflyguy lands on one side of this debate - it is most definitely a debate. The other side is just as sure that boards made of wood have their own antibacterial reaction and can be used, even if cut. Especially if they are pine or oak.

https://www.rowandsons.co.uk/blog/myth-fact-antibacterial-properties-wood/ (sadly the original research is no longer on the site linked within)

The other side is just as sure that boards made of wood have their own antibacterial reaction and can be used, even if cut.

Ah, it didn’t occur to me to look on the archive after the link died!

I mean, I’ve got hundreds of hours of professional food safety training, but what do I know?

Engraved surfaces are particularly worrisome because they are actually countless tiny jagged crevices whereas the surface of a board, and even slices into the board are smooth and polished, giving microorganisms much less purchase and allowing them to be cleaned more effectively by common means. If those studied compared engraved cutting boards and I missed it, I’ll stand corrected. Wood cutting boards are safer partly because of the chemistry of the wood but largely because of the closed surface structure compared to plastic which is marred very easily.

Personally, I’d never use an engraved board for food, even if filled with food safe epoxy, but I’m trained to be cautious and thorough enough that anyone is safe eating what I prepare because I prepare food for the public. Others may take risks as they please.

What professionals have to do to comply with regulations is a far cry from any home kitchen. If you want to follow commercial regulations in your own kitchen, that’s fabulous, but it’s disingenuous to indicate that everyone should do so.

I disagree completely. Professionals follow standards designed to ensure the safety of all diners without unnecessary overreach. I would never suggest everyone replace their entire kitchen with NSF tools, but cutting boards are not difficult or burdensome to use correctly. The fact that most home kitchens are terribly unsafe doesn’t mean that’s ok. There’s nothing the least bit disingenuous about helping people understand the risks they’re talking, or suggesting that one shouldn’t assume others want to take those risks.

Science would indicate that you are incorrect on the cutting boards. They specifically talk about cuts in the wood in the link provided.
That home kitchens are often unsafe is accurate, but it’s not cuts in the wood boards that are the main reason.
Helping people understand risks is very different from statements such as “if you impact the surface of the cutting board, it should not be used for food prep”.

I made no assumptions about your skill set, but unless you held the very specific jobs I have, you definitely did not receive the same training I did. And again, engraving in the wood is -not- the same as cuts. Others may take what they like from this conversation, my part in it is ended.

It was interesting to read the studies. The initial premise was to prove the validity of the standards but then ended up proving the opposite. Not the first time science was applied to something that everyone knows is true but turns out differently.

The regulations are funny sometimes too. The 3 sink washing process is one that gave my local health inspector a fit when I got my permit. I have a giant (as in 320 quart) kettle corn cooker. (I run it for some local charities like my wife’s school, Boy Scouts, etc.) The inspector came to check out my operation which has hot water & a couple of handwashing sinks but no triple sink. I use a friend’s restaurant kitchen as my commissary kitchen although it’s only a handful of things (scoops & measuring cups) that need to be washed.

So he asks about how I wash those. He’s thrilled I have multiples so I can switch out scoops every 4 hours, etc. Then he gets to the kettle and asks about cleaning it. (The real process is to fire up the burners, heat the kettle bottom red hot and throw 5 gal of water into it to boil and wash, then another 5 gal to rinse and then a final bucket rinse of sanitizing solution…but all in place. It’s in a big frame. The kettle is almost 3 feet deep and 40" wide.) So I explain this. I show him how the kettle tilts but doesn’t come out. Show him the burners (1.2M BTUs). Fire them up just to show him (and because they make a jet engine noise when all 3 are going

There’s no place for any of that on his form.

We both know there isn’t a way in the world that I’d be wrestling that big old kettle into 3 sinks and that it really isn’t needed with the way they’re actually cleaned but he needed to hear I washed my “implements” in a commercial kitchen. He could assume the kettle was an implement

Similar thing happened when I took my ServSafe food safety course. The instructor was “like none of this applies to you, popcorn doesn’t support bacteria - popped or not”. But now I get to argue with my wife about how long the potato salad can stay out when we have a picnic