So man was it hot here at Day 2 of MFNY. The Glowforge eventually locked up, so @Bailey came running over to get support to lift the heat limit on this show unit so it would restart, but even then we had to shut down for a while. That aside day 2 was equally busy with continuous crowds at the booth, and I even got a little making done live.

I managed a urgent make for our neighbor booth who makes the N-scope (which is really cool) he had an acrylic arm on a servo that was not fitting the bolt he had, so we measured the bolt with my calipers and then put the arm into the GF and with a 4 second cut, had a nice hole in the arm.

Can’t say enough things about @dan and team for supporting us all show, it was huge having a big vendor looking out for you. and everyone from the GF team was so fun to meet and talk with. Glad we could show off everything to the team about how we use the Glowforge!

No amazing to it, totally deserved. The only thing I saw that people loved more than you was Kermit riding a trike, and who can compete with that?!

I loved the N-scope, I’ll probably get one. Who doesn’t want an O-scope on a breadboard?

As @henryhbk said, it was so hot! It was great though. I got more face time with @dan than any one costumer deserves.
@dan, what was that book I need to add to my reading list again? Ref. Tesla.
Met several more of the

staff today. I have not met anyone who I was not impressed with! 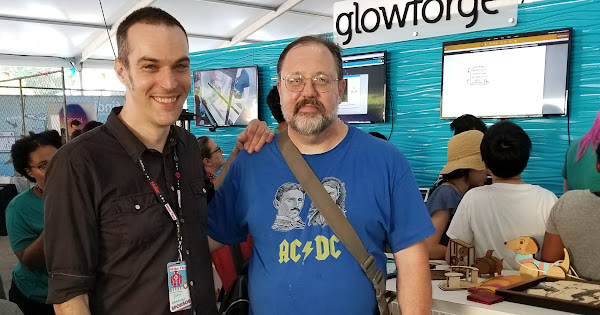 Spent a lot of time working with the guys from shopbot again today. They give the

people a run for their money on being awesome. Completely different type of company but the ethos is the same. 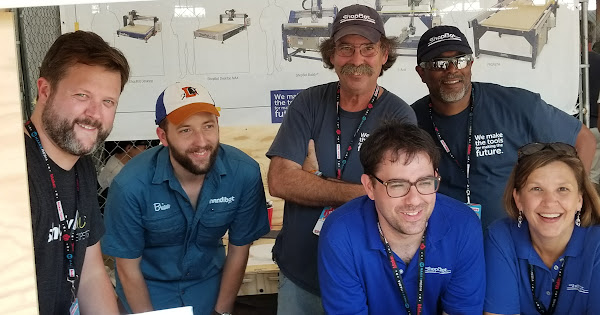 I am so bummed that I wasn’t able to make it either yesterday or today.

Congratulations! Totally deserved given the envelope stretching you do with your innovating…they just acknowledged the obvious.

@markevans36301…did you happen to get a picture of Kermie riding the trike?

Just for you @Jules!

The guy with the rc remote would stay back enough that he looked like he was out riding on his own.

Congrats!!! By the sound and look of it, they were much deserved

I was really impressed with the sophistication of the crowd on this. There were no bright lights nothing being given away. But there were super cool things to show and @henryhbk amazing ability to engage with people. At no point was there less than three deep at his table.

Okay, forget the Glowforge - I simply must have one of those!

Right? There were fire breathing dragons, drones, 3d printers everywhere, alt marching bands, laser cutters, cnc, but everyone who saw him loved, loved him. By the end of the weekend he was covered with ribbons.

I bought one last year…

did you happen to get a picture of Kermie riding the trike?

Almost ran him over when I drove in to load-in…

(I bet he put a smile on everyone’s face who saw him.)

Spent a lot of time working with the guys from shopbot again today. They give the

people a run for their money on being awesome.

Totally agree. When you call that place for support they treat you like you’re running a huge company with your machine…even if you’re a librarian with a tiny shop in your basement. Love them!

Well Done Henry!
3 awards, not bad for a first timer

Thanks for sharing your experience.

Sounds like glowforge did a stellar job supporting their exhibiting customers! I’m not surprised.

Sounds like glowforge did a stellar job supporting their exhibiting customers

Yeah, Rachel was awesome at coming by when things went wonky (man it was hot in that tent!)

man it was hot in that tent!)

Yeah, experience like that gives you real appreciation for the simple things - like a shower!
Seriously, you are the first ‘medical maker’ I have encountered. Maybe the first for the fair huh? Great idea.

The whole drive home to Boston that’s all I wanted was a shower. So even at Midnight when I pulled in, didn’t even unload, just went and took a shower, which felt amazing…