Deepnest (SVG nesting) is now pay what you want!

They used to be on a pay-per-use model, but now it’s a one time pay what you want! It’s not web-based which is amazing and much quicker than the browser based svgnest.com

Looks like it has gone to a pay-what-you-want model. https://deepnest.io/

Yes!! It’s been mentioned a few places in threads, but figured it deserved its own thread.

I’ve got to give this a try.

Downloaded it to my iMac (OS X 10.13.6) and while the app will load, it has yet to nest any svg imported. I’ve tried gravity, bounding box, and squeeze. Attempted to make 2 copies of a simple box and let it sit for 4 hours and it never returned anything, not even an error msg. Less than impressed so far. Hope others have better luck.

I had good luck, one of your parts needs to be the sheet and marked that way on the first screen.

I didn’t make the sheet my first couple times and it just sat there thinking.

Yup – that worked once I made sure all my SVGs had the same scale. D’oh!

one of your parts needs to be the sheet and marked that way on the first screen.

fwiw, you can click the plus and add a rectangle of whatever dimensions you tell it and then make that the sheet. so you don’t need to add the sheet object to your SVG. just add it in deepnest.

my first run looked pretty good. i’m running a more complicated one now with a big stack of the complicated reindeer ornaments that my wife’s been cutting. gonna let it run multiple runs and see if it gets better. 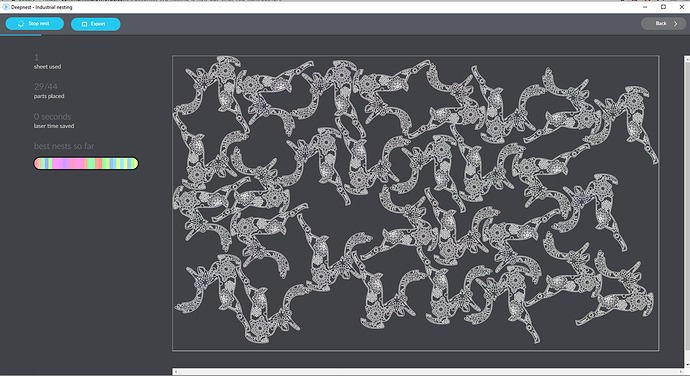 Have you tried manually nesting them with them rotated 180* out from each other? That looks like a really chaotic nest. My gut feeling is that there’s a lot of the sheet wasted, but I can’t prove it without reloading Photoshop.

The one time I remember manually trying to nest them, it was more awkward than you might think.

One thing I noticed is that, by default at least, the exported file strokes all the vectors with black, doing away with my carefully applied colors. If there’s a way to change that I haven’t found it.

Does it undo weights too? If not you can use “select same” to get your colors back pretty quickly I’d think.

It probably resets the stroke entirely though?

Just looked at the test I did. Sadly, yes. It makes all the vectors 1pt black.

Does it reset fills? Anything to differentiate.

I don’t know – the test I ran only has unfilled shapes. To know what the program is truly capable of, I need to mess around with it more. The behavior I’m seeing is with everything set to defaults. Deepnest may well be more capable than my simple test indicates.

damn. i hadn’t looked at an export yet. for my reindeer it wouldn’t be bad, since i’d just need to select the outlines to be recolored. but for anything more complicated, that would suck.

i wonder why the app would need to change color/stroke to make this work.

So I uploaded a file that was a mix of colors and had some simple shapes and some already-nested parts, meaning “paths inside paths”, or cutouts like a donut.

What was interesting is that it defaulted to black for my single paths that had no cutouts, but it color coded the pieces that had cutouts with very dark green stroke on the outside path, black stroke on the inner path. I wonder if it chooses colors in some way that is user editable (that we could match to the GF template… I looked but didn’t see anything obvious), but it looks like it’s at least aware that nested paths should be different colors.

i’m just not sure what changing the colors does for the program. shouldn’t it be able to see grouped objects and move them w/o changing them?