Definitely not the Millenium Falcon (tm)

So I made the CY-1300 from c4 labs. (Model can be found in this thread You’ll have to scroll down, but the svg is attached to that thread. Trust.) 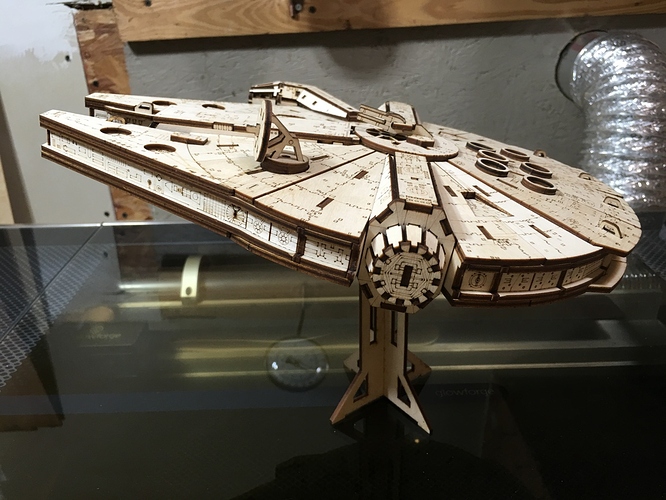 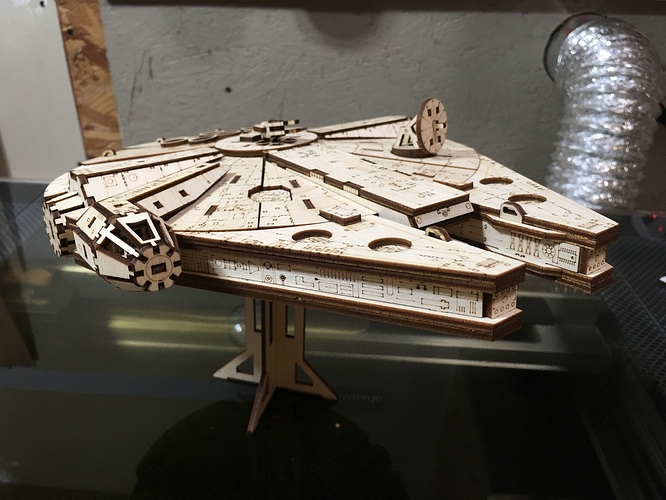 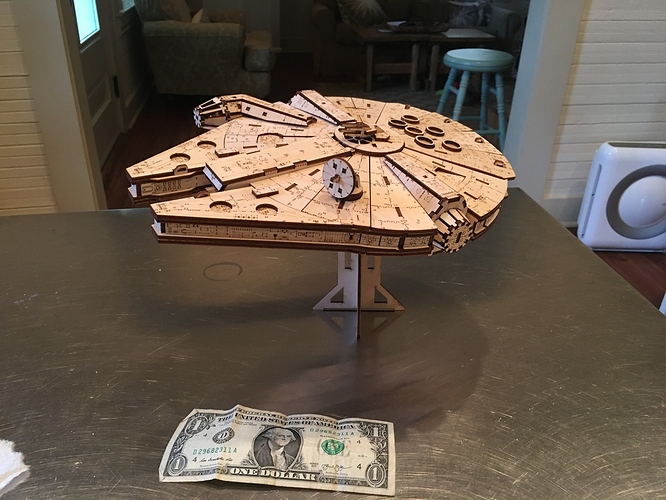 Things I learned and you might want to know about:

The smoke would definitely add to it, oriented the right way!

I love the re-entry burn marks on the shuttle.

Oh yeah good point about the orientation. I modified the pdf massively and made really tight cutsheets, saving a lot of materials… but the way the PDF is laid out would be perfect for GF smoke, as least as far as the main body panels go.

I’ll have to redesign my cutsheets. In the end I saved what, maybe a sheet of baltic? not worth it. I’d rather go slightly less tightly packed to get the orientation of the parts right for the smoke. Good thinking.

The smoke would definitely add to it, oriented the right way!

that’s one thing i like about the universal. there’s an optional cone for the air assist that you can rotate any direction you want.

Oh also, assembly probably took like 10+ hours because of my insistence on friction fit. I had to sand and file way too many slots to make it worth it. I think the limiting factor if you made it a glue fit would be the glue dry time.

to be fair, it’s a $30k+ machine, depending on what features you add on and what power tube you have. so not surprising. but still.

Oh, I want one, but I do not have that kind of patience. Maybe I’ll cut it and give it to my husband to assemble…

If you made it a nice glue fit and went light on the glue to help it dry more quickly, I bet it’d go together in about 2-3 hours.

It was a fun build. There are some cool tricks in the construction that might give you ideas about how to design things of your own. It’s kind of hard to describe their clever joinery without actually doing it.

I’ll have to redesign my cutsheets. In the end I saved what, maybe a sheet of baltic? not worth it.

Just an awesome job. I’m with you though - packing parts is generally a waste of effort considering the time it takes for the amount of inexpensive wood it saves.

Given how well it turned out, I’ll probably scale it up by about .01" width on the slots and give one or two as gifts.

Thanks. I can cut down 5x5 sheets.

Is it just me, but the c4labs link to download the files appears to be dead.

It’s not just you. Keep scrolling down in that discussion. It’s directly attached.