In my confirmation email of purchasing the glowforge, it said that all of the designs ,INCLUDING the ones on the glowforge introduction page and previews, would be available. I checked out the design catalog, absolutely NONE of those items are in it. Not the messenger bag, not the sandals, not the wooden drone thing, NOTHING! Does anyone know the reason why? Some of those designs were the reason why I bought this machine in the first place.

Also, I thought some designs, including the ones on the introduction page, would be available for free. What happened to that?

Your email must say something different than mine. Mine only indicated the video items, nothing else.

“The designs that you saw in the launch video on glowforge.com”

The company has indicated they are still working to release the design of the drone.

They are still working on the designs and instructions.

They said all of the designs are coming— except maybe the Catan board, due to licensing issues.

Coming but not ETA, like everything else. I expect some people’s machines will have reached end of life before everything that was promised is rolled out.

They ‘kinda’ released the Catan board. That is, the did release it, but as a PDF, not as a design in the catalog. But you can download the PDF from https://glowforge.com/laser-cut-catan-board and work from there. You can print PDF’s in the Glowforge app, and you can open them into Illustrator.

There were a bunch of quick shots in the video. I see:

So it looks to me like there’s a LOT left to get released. As long as they’re being worked on, I can be patient - I have a lot of things left to design on my own. But the quad drone would be fun! I keep breaking the ones I buy - if I print one, that’s less of an issue.

Making a quad drone isn’t hard to do. I’d bet there’s at least a dozen or so drone body design’s on thingiverse or instructables you could build right now.

Can’t imagine why anyone would want someone else’s personalized jeans, crown or even the kid drawn airplane. And the globe and jeans goes against the company policy that they won’t support or recommend anything other than PG material in the GF.

I am personally interested in turning my old Amazon boxes into a globe light… Is that actually going to get released?

or even the kid drawn airplane.

Well you do get that one. 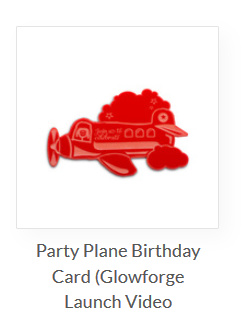 I don’t recall getting the video designs being mentioned in the confirmation email nor in the original sales pitch. This was an unexpected gift later on.

I think only the video ones are promised. The ones from the page are still a maybe:

Great question, and not one I’ve addressed before. Objects from the video are coming, but no guarantee on objects from the front page of the website. Fortunately my satchel made a cameo in the video!

Yes, the designs in the video were Dan being extra-generous post-sale.

Thanks for the help everyone. We haven’t finished adding all the designs to the catalog yet, but we will add all the designs from the video in the future - and when we do, you’ll receive them free of charge.