I created this file. When I import the SVG from inkscape it won’t import the cut lines and the design separate. What am I doing wrong? I get the error message design contains clip path, the clip path has been changed to a path. and the red CUT line I created doesn’t show as a separate cut. I have tried doing it as a PDF still no luck. Why? 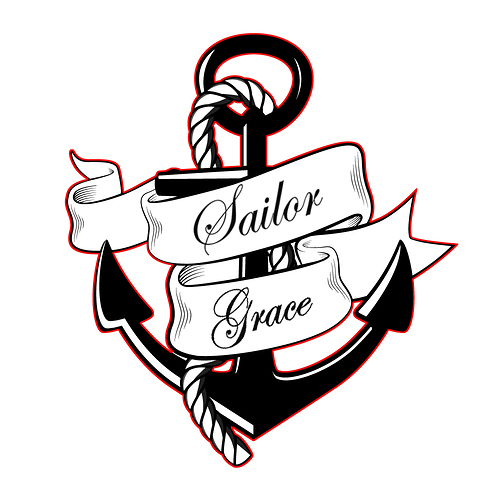 It looks like that image is a .jpg - which means it’ll only ever engrave. It needs to be a vector to cut. I don’t use .pdfs, but I believe like .svgs they are a container that can contain rasters and vectors.

You’ll want to open this in a vector program (Inkscape is recommended and free) and either re-do or trace the red line into a vector and then either import the saved .svg into the GFUI or save it as a .pdf and go from there.

I have saved it as a PDF and it still won’t separate it. And I have imported to INKSCAPE and saved at SVG still no luck.

either re-do or trace the red line into a vector

Just using the program won’t change the nature of the line. It has to be a vector to cut

In Inkscape under the Path menu there is a “trace bitmap” option - you can separate out the red line in whatever raster program you’re using and trace it.
Or you can delete it and create a new one using the line function in Inkscape. There are step-by-step instructions in the Tips and Tricks section of the community

Here it is in an Svg. You may want to take it into Inkscape and clean it up some more but there is only a vector engrave and an outside cut line, the image is hidden but there.

thats great thanks. I still have a lot to learn with INkscape! Need to figure out how to do the outline for this myself!

It Is Path > Trace Bitmap when you have the bitmap highlighted. There are a lot of adjustments as to exactly how to trace the bitmap but as you see all that is done took me 10 min from dl-ing the jpg.

I can’t get trace bitmap to do what I want, which is just form an outline around the image and cut out the empty spaces inside the anchor

The trace will start the project. You then go into the nodes (2nd button down on the menu on the left) and edit to what you want. Often the trace will use 15 nodes where you only need 2 or 3 so you delete the extraneous ones (select and delete), or won’t have a node where you want a sharp corner so you add one (double click on the line)

It’s a short-cut, not a final product

I used Path > Break Apart to separate everything out, Duplicated the outside one, and poked it in the eye and then selected the rest and the one I duplicated and used Path > Combineto make them one thing again.

If you don’t want the black to cut but everything else, just don’t include the outside one.

very frustrating when I can do somethig so easily in Photoshop…

I found a work around. I can import teh outline separate and it shows up fine, so I just did the anchor and then imported teh outline and lined them up

Hi @dieterkutz, I’m so sorry you hit a snag with your design file. Thank you for the pointers @deirdrebeth and @rbtdanforth! I’m glad to hear you were able to find a workaround and get your file figured out. I’m going to close this thread now. If you have any other questions please feel free to start a new thread or send us an email at support@glowforge.com. Thanks!