Dispatches from the front (Pre-Release Report) - It's Just Physics Preview

If you’re following my adventures with a PRU, you can probably surmise from my last report (Dispatches from the front (Pre-Release Report) - rabbit hole edition) that I have many pieces of partially chewed acrylic on my hands. You’d surmise correctly.

I have a series of Physics related coasters or knicknack plaques (aka “dust collectors” per my wife) I want to make. I figure I’ll send my daughter back to college with some come August when she returns. She’s got a new apartment waiting and some coasters will be handy. Physics related ones will be cool because we are after all the geek family.

Here’s the first design I knocked off quickly last night just for grins. I’ll make the full series this weekend and post them but it felt good to get something done with what I discovered in my acrylic engraving explorations. So here’s a series teaser. 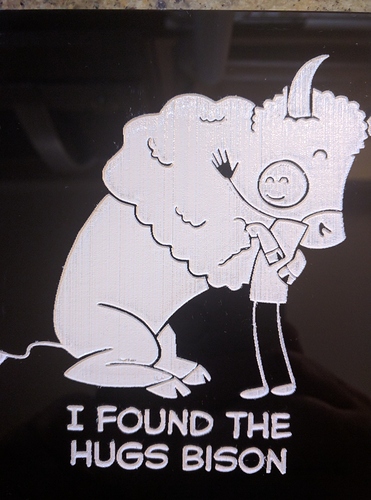 The image comes from her professor’s “welcome to the physics building” PowerPoint that loops in the lobby of the department. It struck me as funny on Sunday and inspired the rest of the series.

Photo of the monitor’s display, brought into Corel Draw as a jpg, converted to a vector using the Bitmap Trace (outline trace, low-res photo settings tweaked for detail & smoothing). The resulting vector had some spurious artifacts from the reflections from the monitor that I quickly deleted. When doing a trace you usually get either a clean image but with missing details (for instance things like the smile, hooves, etc) if the detail/smoothing/curve settings are such that you eliminate background artifacts. Or you can get your essential details but likely also some stray blobs and things you don’t want. I find it’s easier to delete extra artifacts then it is to go back in and add details you want from the original.

Save it as an SVG, upload to the GFUI and pop in a piece of the pile of acrylic scraps. Set it for 1/335/225 and press print. Ten minutes later off it comes ready for a quick shot of paint in the engrave to highlight the Hugs. I used some Rust-Oleum Gloss White spray enamel because it’s what I had and this is just a proof of concept. Let dry overnight and peel off the masking.

Good enough to encourage me to design the other three in the set I thought about during the long drive from NC.

I will of course make an extra set for her prof. Can’t hurt and likely something he’ll appreciate. He does spend each morning in the study of “high speed ovoid projectile path prediction” (aka handball). Physics oriented coasters will be right up his alley and it’s never a bad idea to be liked by the department head.

(Don’t forget to link it in the Highlights.)

Was there ever any doubt? I’m buying a laser here.

Adorable! Don’t forget to show us the other three when you do them.

Just a reminder… we ALL bought lasers here… and we’re the ones who are here, daily, having discussions about lasers that most of us do not have in hand.

I’m worried about our future

I got worried about our future a LONG time ago.

Sure, everyone loves the Hug Bison, But what about the kiss fish?

Excited to see the others!

could be some laser artistes out there?

looks beautiful - so glad she found a physics professor with a sense of humor! (for the record, yes, I get it, and I was one of those people who heard the news a couple of years ago and thought - wow, there was a world before this was found and a world after. historical. cool.)

but, it did remind me of a little haiku I wrote a while back (not physics related, but akin to the cartoon)

I hope so - as a lay-person interested in science-y stuff, I know enough to know I don’t really “get It”. I understand the pun in the cartoon, and why it was an important discovery (why mass exists, etc.) but really getting it?! hm…

Only if you’re not too particle-ur. (Sorry, I know that one was bad…)

I was hoping they’d find the hugs bison with a little less energy, myself.

Photo of the monitor’s display, brought into Corel Draw as a jpg, converted to a vector using the Bitmap Trace (outline trace, low-res photo settings tweaked for detail & smoothing). The resulting vector had some spurious artifacts from the reflections from the monitor that I quickly deleted.

(Also awesome and has been on my wall for a while)