Dispatches from the front (Pre-Release Report) - the ugly

Amongst all the cool stuff people with PRUs have been posting I wanted to post something not quite so pretty.

Here’s an ugly example of what you can do with the tool. 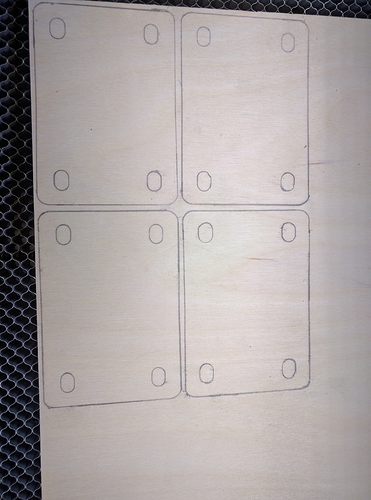 I ended up with this, 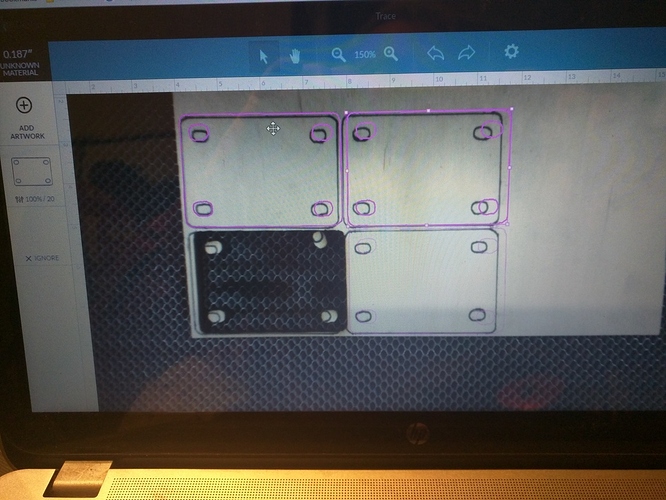 So what is it?

My GF sits on a Home Depot 46" rolling tool cabinet. There are two swiveling & locking casters and two fixed casters. They work okay except when moving it around you have to wiggle the cabinet into place when tucking it into a space. Someone on the forum mentioned replacing the fixed casters with additional swiveling ones to eliminate that issue.

So I decided that was a good idea and hustled off to Home Depot to pick up another pair of swivels. I figured that since the box was Home Depot and the casters were Home Depot, a replacement set of 5" casters would just bolt right in.

Not so fast Scooby. Despite a quick check against the display unit of the cabinet when I got home & pulled off the first fixed caster and slipped the replacement in, it was 1/4" too short! The wheel was the same size but the hardware housing it had a shorter yoke.

Gonna have to run back to Home Depot and see if the other 5" caster would work.

But I have a GF. I can put a shim in between the wheel yoke where it bolts into the box and I’m gonna be good to go.

So I trace the top plate of the wheel with a pencil in a piece of ply and drop it into the GF. Quick scan later and I realize the pencil trace is too light. So I do it again with a sharpie. Boy can you tell I’m no artist? Even my trace of a rectangle is an ugly hack

But it’s the right size, shape and the holes for the bolts are all in the right place without measuring and without creating a design in a CAD package. That’s super!

) and ready for use. They stack together and fit without a problem. Beat the heck out of my jigsaw skills.

Simple problem with a quick & dirty GF solution. Just proves everything coming out of the GF doesn’t have to be pretty.

Worst thing in the world is getting back from the hardware store and realizing you needed something else too! Now, I’m only five minutes away - but when we lived in northern Nevada I was a good thirty minutes away from the big box. I’m sure it was less time to do this on the GF than it was to run back to the store! Love it.

Isn’t the fourth law of thermodynamics, thou shalt go to the hardware store no less than three times to complete a project?

I don’t know if I like glowforge messing with the basic nature of the universe.

I was a good thirty minutes away from the big box. I’m sure it was less time to do this on the GF than it was to run back to the store!

That’s me. Gonna be an hour minimum. PITA and no one is going to see my shims & they work fine. Saved myself at least 45 minutes and I got to play with the laser

I have three stores to choose from, all in the same area, 3 miles away. 40 minute round trip not counting time spent in store.

Useful trumps pretty many a time.

You know, this thing may pay for itself just in saving me gas running back and forth to Home Depot. It’s 30+ miles each way

BRAVO! Reading about all the cool fix-it-quick stuff the GF can do (in addition to all the gorgeous artsy stuff), I keep getting this phrase stuck in my mind: “Original, One-of-a-Kind,custom-made, mass-produced yet small-run” which, on the surface, seems like a bunch of conflicting statements, but GF makes them somehow, magically, true.

I though it was

All projects will require two additional trips to Home Depot and an extra $50.

Have five Lowes and Home Depot to choose from. Each of them are almost exactly a 2 hour round trip in different directions (not including store time). At one or more of them at least three times a week since getting the GF.

I have five lumber yards within five miles of me and two TrueValue hardware stores. I visit them all so none of them get jealous. I have slowed down going to them though. I have so many things I think I’ll get to and I don’t get to them. No more buying material until I go through what I have!

And this is not ugly at all. I was worried that you were going to demonstrate how bad the trace and scan was, when in fact you demonstrated how accurate it can be for little practical things. Not ugly, just functional.

I was worried that you were going to demonstrate how bad the trace and scan was, when in fact you demonstrated how accurate it can be for little practical things.

Ugly in and ugly out

@Dan needs some automagic processing that pretties my drawings. Like Perfect Pitch for lasers.

Practical and quick are beautiful. As much as I love my cnc the glowforge is easily 50% faster from concept to ready than the cnc.

Haven’t picked up my cabinet yet but seeing your post made me think I should go ahead and just order two of the swivel casters and have that ready to go. Called Husky (Home Depot) and they said fine no problem that’ll be $46. I said no thanks. So I’ll buy the casters jamesdhatch did but I will have to make the shims the old fashioned way since I don’t have a GF yet

they had 2 5" swiveling & locking casters - both are “heavy duty”. One has red polyurethane wheels and rated at 330lbs (the ones I got). The other is a gray rubber wheel and were rated for 300lbs. I picked the reds because the other wheels were red

Thanks for the info. I’ve got some heavy duty casters around from Woodcraft and if I don’t have the right ones or need more I can probably get matching ones there.

Similar thing happened to my brother yesterday. He recently got a cheap 3D printer. He was replacing a towel holder ring in his bathroom and realized he lost a couple of plastic caps. He went to the store and they did not sell the caps. Then he realized… Calipers + 3D printer = new caps! Done.

We find it amusing that I went subtractive and he went additive. We’ve talked about a YouTube channel where we just make stupid stuff with our new toys.

We’ve talked about a YouTube channel where we just make stupid stuff with our new toys.

That could be a ton of fun! Let us know if you guys do that.