Hey there everyone! I figured I’d share with you my window flange insert that I whipped up along with a shopping list.

It is advised that you don’t keep your glowforge exposed to outdoor elements at all times so I made this modular.

The measurements that I used for the length of the board is about a quarter of an inch to a half an inch wider than the window opening. I fill in the rest of the Gap with weatherstripping. Any bigger and you won’t be able to slide the board into the window frame.

In my window the 1x8 board slides snugly in the rail gap that my window would normally occupy.

If I had more patience and the right tools I would have made the PVC pipe flange on the outside of the window and push it through the board, but I was eager to get started!

I used some adhesive-backed craft foam to make the seal of the cap more snug.

From what I’ve gathered the exhaust isn’t all that hot is just mostly smoke. I don’t imagine you have to worry about anything melting or burning. 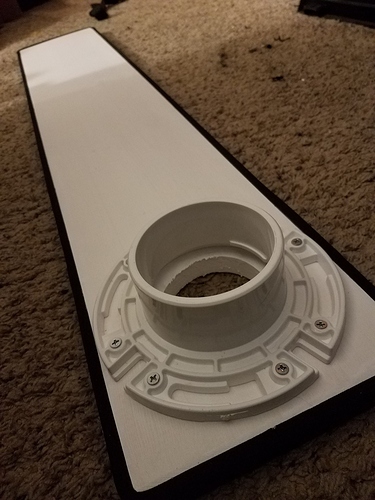 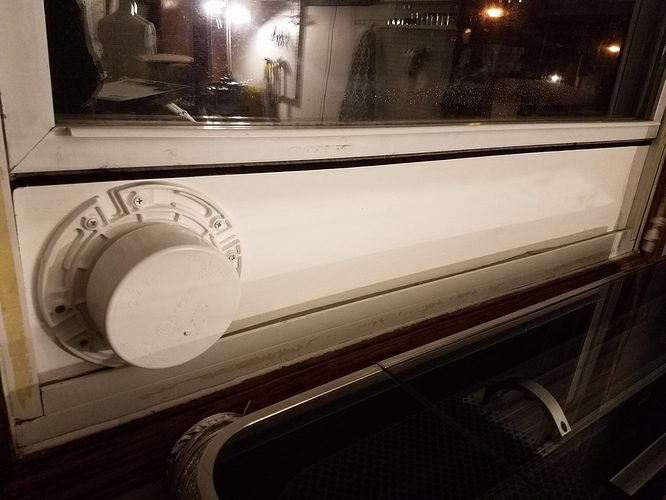 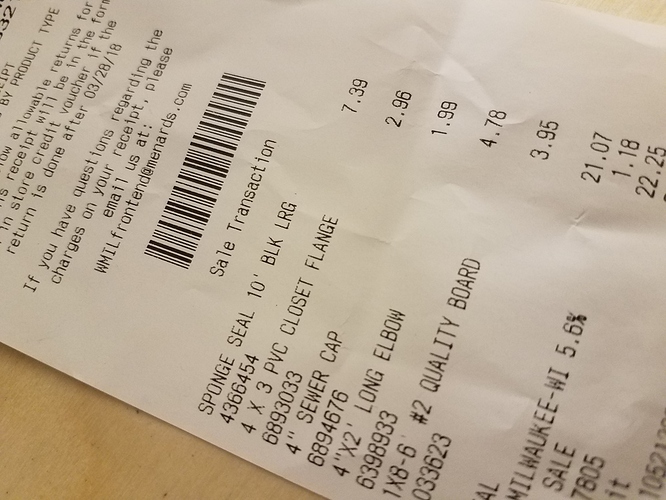 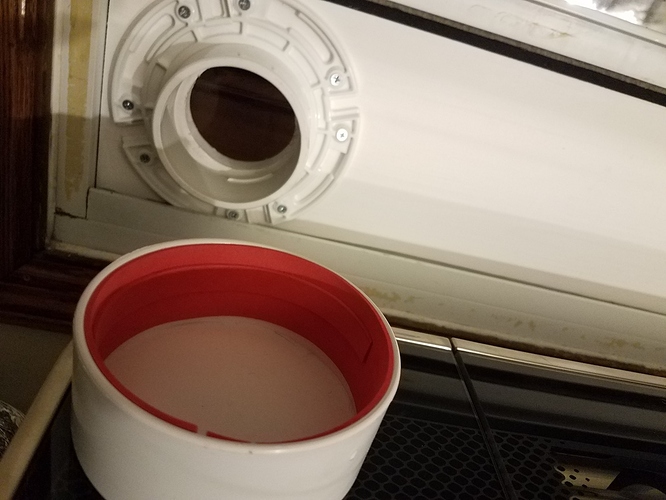 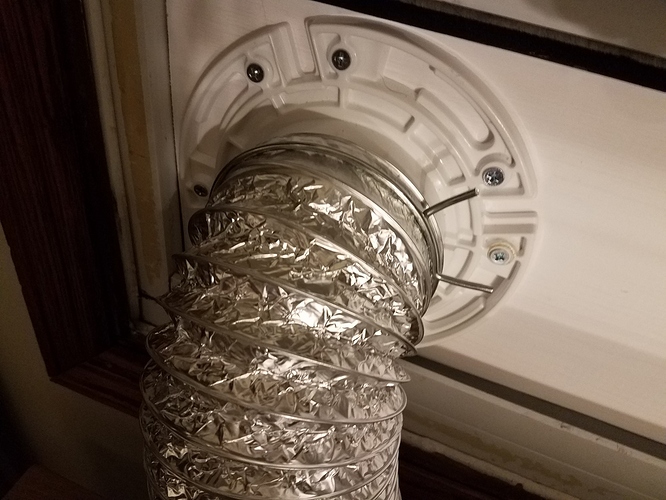 couple of thoughts based on having the same style of window.

you’ll need to block the top of the lower window sash as there will be a gap up there where exhaust can come back through into your room.

i’d advise getting a screw down hose clamp as opposed to the included squeeze clamp. people have reported issues with the squeeze clamps. they make thumb screw clamps if you need to be able to remove it more easily.

personally i made that connection permanent and installed a blast gate to slide closed when not using the GF in cold weather (like the single digit temps tonight). Using aluminum tape everywhere gave me a much better seal. but i also don’t need to remove either the window insert or the hose as it’s in my office and out of site. so i literally aluminum taped every seam in the window. it’s not pretty from the inside, but it’s my attic office, so i don’t need to impress anyone. can’t see the tape from the outside.

I have a similar setup in the works but mine will be semi-permanently attached to the inside ledge while still allowing the window to be closed. Basic weatherstripping to deal with the seal against the frome when it’s open and in-use. I have an additional in-line 4" vent fan so I’m not worried about fumes sneaking their way back in - although if I find there’s a good amount of flow, I can put more there as well…

The reason for the fan is that I plan to use a semi-permanent, rigid vent system, which might have 4 right-angles, depending on where I end up mounting things.

Nice solution!
I needed a booster fan due to a long exhaust run, but a benefit is the booster continues to run after the machine exhaust fan shuts off so a little better mitigation of odor when the lid is opened.

I did seal up the window up top with some EVA foam. Not well, but it works for now!

I considered having a sliding door in the build, but I wanted something to insulate how freekin cold it is outside. x__x

I plan on using a nicer hose and some hose clamps eventually, OR making it so that the hose connects with some more PVC so it just wedges in instead of needing to be clamped, but we’ll see.

Nice! I have a similar setup. I bought that quick attach pvc piece but it ended up going on backwards until I can find some support for it since it stands off so far. I like your cap idea. I currently have a big chunk of foam on a rope to plug mine. Not very pretty.

personally i made that connection permanent and installed a blast gate to slide closed when not using the GF in cold weather (like the single digit temps tonight).

I tried a bast gate, but found it was leaking fumes. It seems those are meant for negative pressure setups, not positive pressure.

I made a similar setup. I need to paint the wood. Here’s what I used.

These were all purchased at Menards as they were the only store in town that sold the disconnects, but you can use anything similar I’d expect.

I cut the board in half and laminated the two pieces together with a generous amount of Elmer’s wood glue. I clamped the pieces together overnight with some weight on it. The next day I cut a hole through the boards using a 4 1/8" hole saw. I bolted the cap to the exterior side of the board and fit the quick disconnect from the interior side. I didn’t end up needing the sheet metal that came with the vent cap as the disconnect seated perfectly inside the vent. 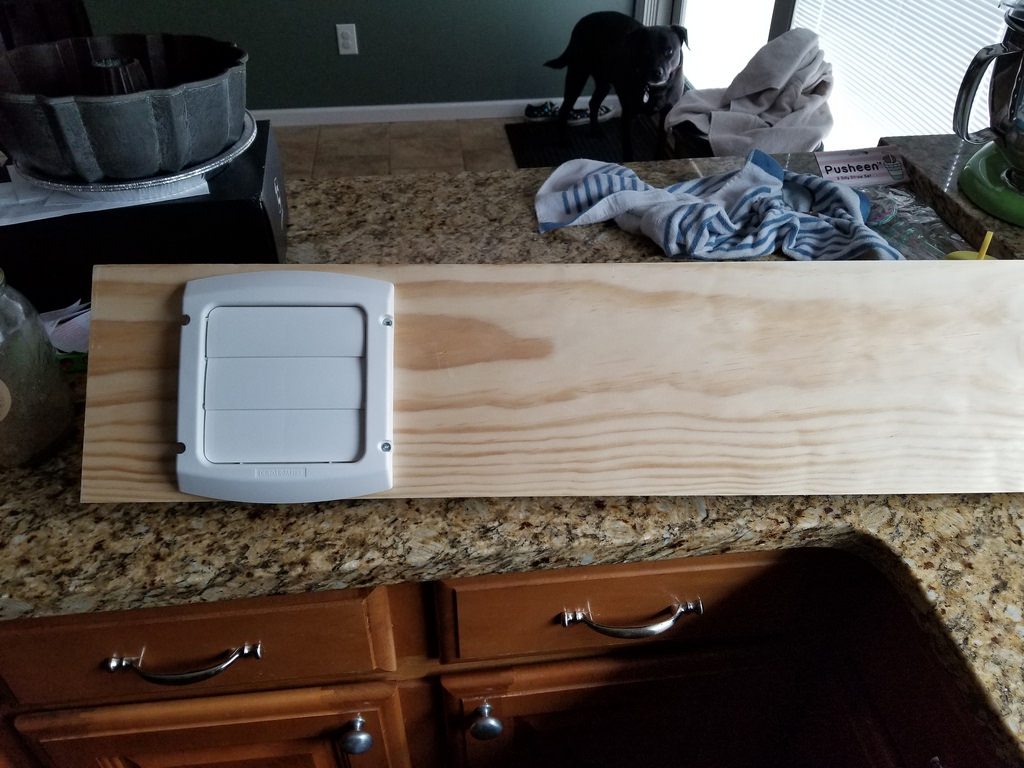 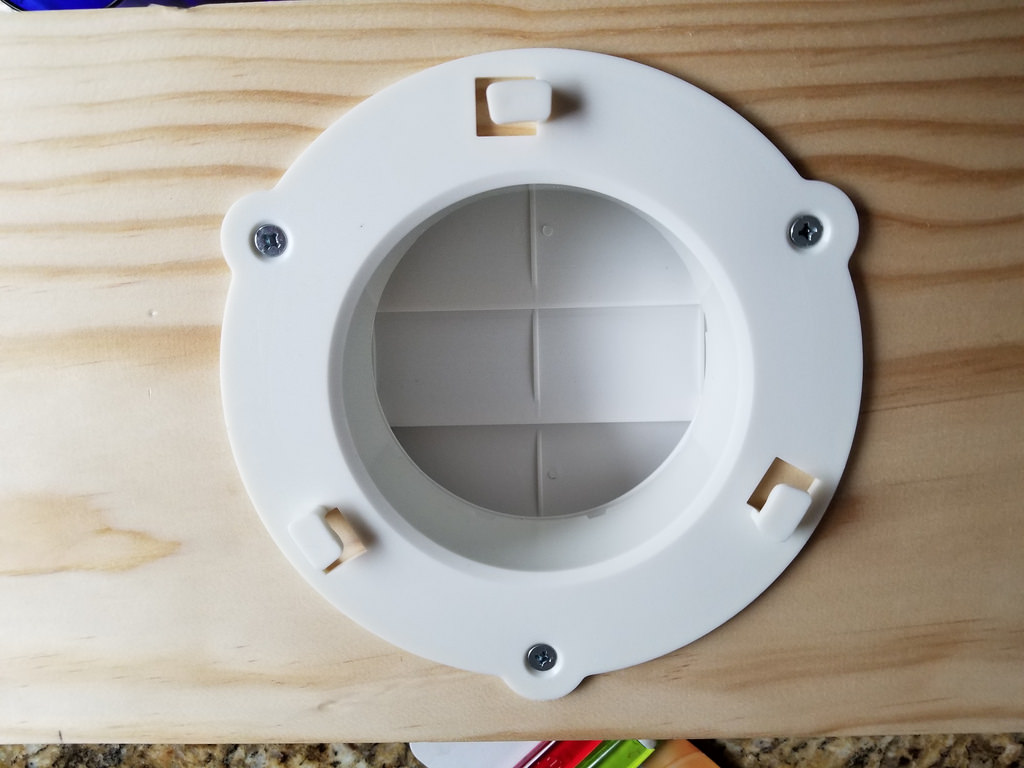 I then took the PVC inspection plug and fit it over the other piece of the quick disconnect. With a little force it fit extremely snugly over the disconnect without glue or caulk! 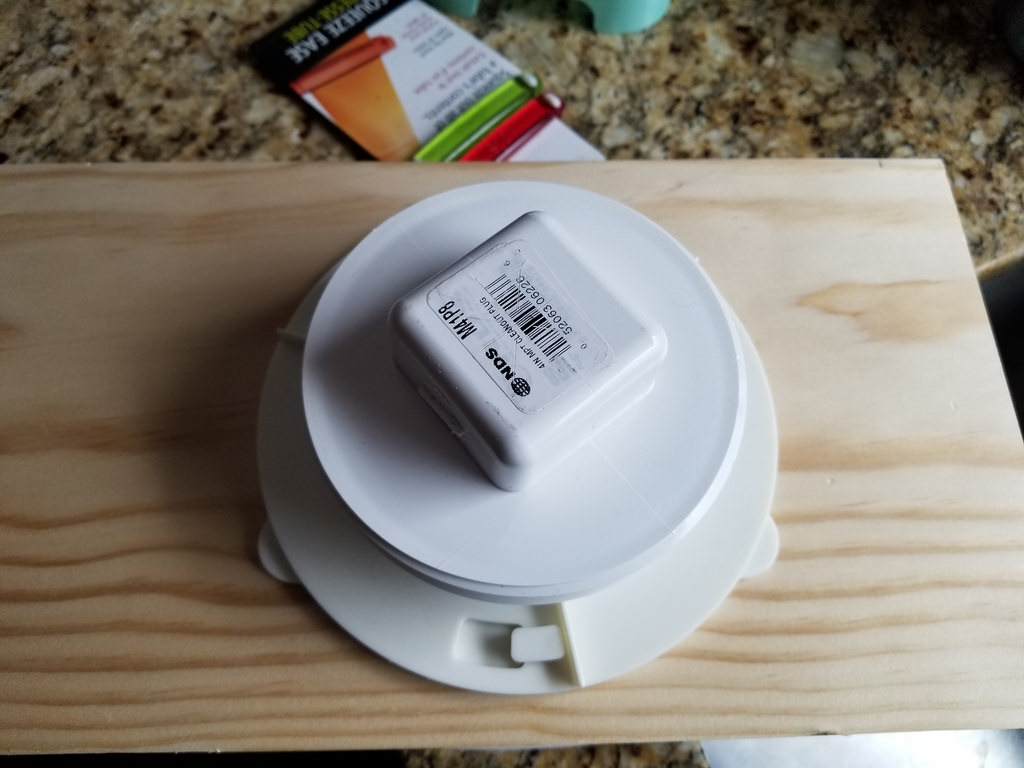 This board was cut to fit into the interior side of the window and a good amount of weather stripping was applied to the top, bottom, and exterior side of the face to make a good seal around the window. It’s been in the teens here all week and I can tell no temperature difference in the room with this in place and the cap in place. I took the female end from the second disconnect kit and mounted it to the hose from the Glowforge with a worm gear hose clamp.

When it’s time to use the Glow Forge you just unlock and remove the capped disconnect and snap on the one with the hose. Takes about 10 seconds. No muss, no fuss!

Do you have an IR thermometer? Would be interesting to measure the temperature of the inside of that panel, compared to the glass or adjacent wall.

I recently discovered that my 6-panel front door has what appears to be 1/8 ply panels! I discovered this because I spotted light thru one - the panel has cracked! I know it was an exterior-rated door when the house was built, but that was 1967! I plan to replace it ASAP but in the meantime I measured the surface temp of the panels, the solid wood sections, and the adjacent walls.

We had 11º recently, but that was before I noticed the crack. Expecting cold weather again this coming week - IR thermometer is laying on the ledge next to the door!

On a related note, the door has single panel side lights on each side. 47º… Guess I’ll change out the whole thing, not just the door! The modern double-pane windows (all new 2 years ago) read close to 60º…

I actually do as we have a couple of temperature sensitive pets. I’ll see if I can’t pull some numbers for you. We recently got it with a cold snap here where temps dipped into the negatives (-9 at the lowest) and the room the GlowForge is in remained nice and toasty. I could feel no wind or cold air coming through any of the edges of the plate, nor from around the disconnect itself. On the whole I’d say it’s probably insulating better than the window glass itself.

We’ve done a couple of test cuts with this setup. Venting works great. The louvers are light enough that the come completely open when the Forge is cutting. I do not notice any air leaks around the quick disconnect. I was considering fabing up a gasket for it but I don’t think that’s actually going to be necessary.

I’m considering adding a 4" inline blower fan just to help increase material suction from the forge itself. There appears to be a few with decent reviews on Amazon that come pre-wired for 110 AC which would make life a lot easier than having to say modify a 120mm DC fan to work.

@blairondrla and @Skorgan do you mind if I add your posts to this thread?

This is one of the first big start up questions and since each set up is unique, there’s no “one size fits all” answer. Hopefully, collecting many different builds in that one thread will make it a little easier for the next guy(s) to find one that works for them.

Sure feel free to embed them!