My son plays Dungeons and Dragons. This semester, he’s trying his hand at being the Dungeon Master. Once in a while, his friends like to do a “Dungeon Crawl” where all they do is generate a dungeon and fight monsters in it.

We were talking about different ways to generate random dungeons (most of them on the computer).

For Christmas, I created a set of dungeon tiles for him. 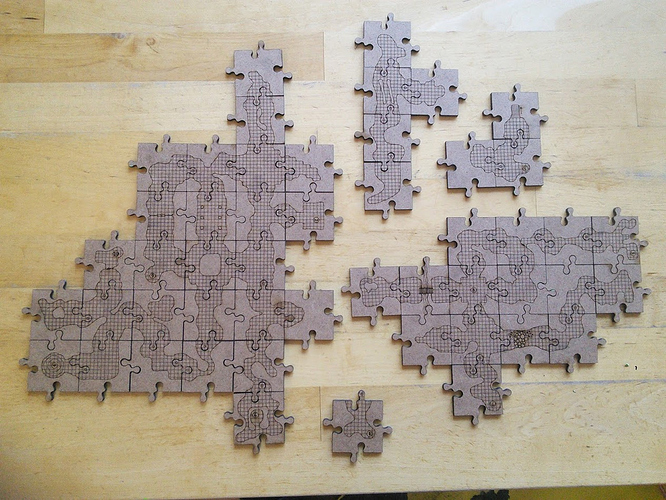 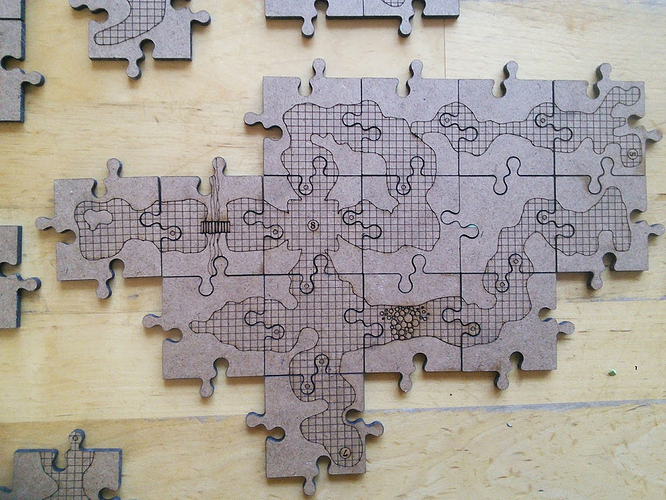 There are 50 tiles, each about 1.5 x 1.5 inch. He can re-arrange them to his heart’s content, to make some simple or really elaborate dungeons. They can also make the dungeon ahead of time, or randomly pick tiles when they explore a new area.

I cut them out of MDF for now, but if I have time before Christmas, I’ll see if I can make them out of proofgrade plywood instead. A 2-tone acrylic from Inventables would also look good.

I think he’ll have fun with these.

That’s awesome! That looks like it will be a lot of fun!

Question: why do some of them have dots and others don’t? 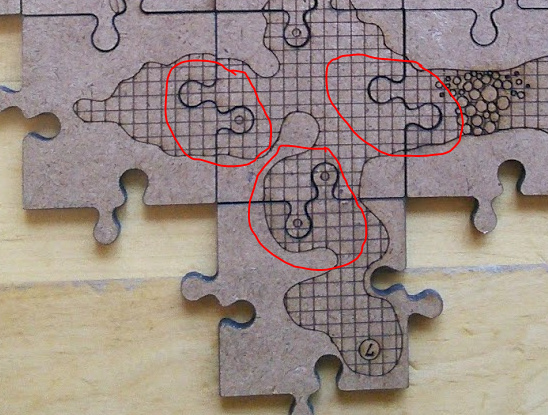 All the tiles should have one dot on one of the four “puzzle nob”.

When you pick a tile at random, you should place the dot facing the tile you were just on. That way, you don’t get to pick the orientation of the new tile, it is predetermined. Of course, you don’t have to follow this convention. I did not do this when I put the tiles together for the picture.

Awesome gift! Great design. He should go nuts for it!

I know nothing about D&D but this looks like pure genius to me.

Nice, How large is each tile?

IMHO: you might want to keep this under wraps and think about presentation (i.e. with some randomising tables etc) because i believe there would be a large market for this

Sounds like your son will get a lot of use out of this gift. Make sure to post a picture if you end up making another set out of Proofgrade plywood!

This is too cool. What program did you design in?

I would buy them.

I used Inkscape for this one.

This is so cool. What an amazing gift!

I’m with you on this one, that sounds like an untapped market to me

Looks really neat! Not knowing anything about the game … makes me want to play!

Not to get too off topic, but…

It’s a great game for lots of reasons and it’s having a pretty major renaissance right now. If you google around, there are a bunch of recent articles on its latest resurgence, especially among celebrities. The game can be played lots of ways, and is often a big improvisational activity, thus actors love it.

For the suuuuper curious or the akready deeply into it: there are several games that are filmed or podcasted. My personal favorite is called Critical Role and is on YouTube.

It’s a bunch of voice actors that play weekly, it’s a major time commitment to watch it all (in just two years they have produced roughly as much content as 20 seasons of a traditional hour-long tv show (!) ) but it’s really fun.

This is awesome. And to someone else’s point. I would totally buy the plans of these off of you. It’s not that I couldn’t do something similar myself, but that I’d pay for the convenience factor. Let me know. Cheers

I would totally buy the plans of these off of you

There are plenty of printable “dungeon tiles” out there, but laser cuttable and with the ‘puzzle piece’ so they lock together is awesome.

I made my son a D&D board " the only gifts they are getting from us are homemade" but I have to say your idea is amazing! Great job!

Here it is out of proofgrade: 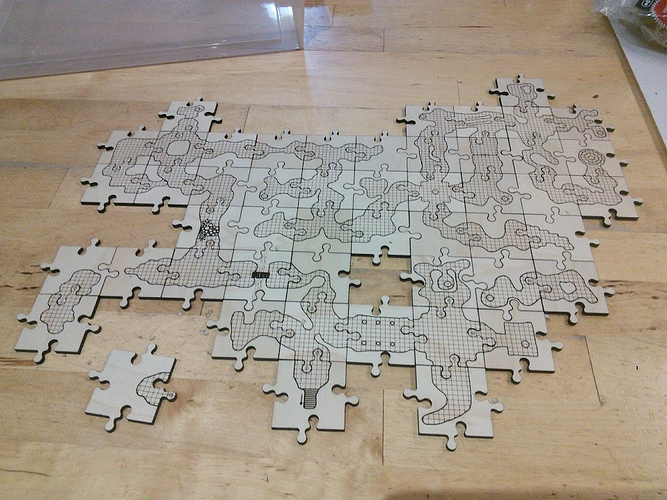 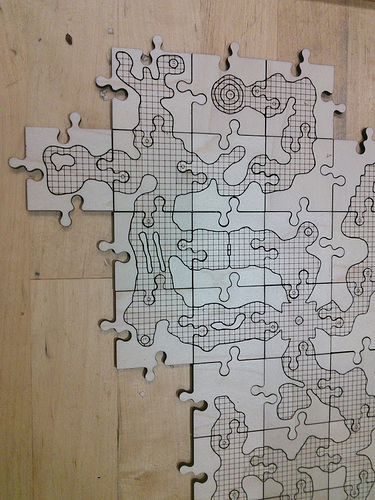 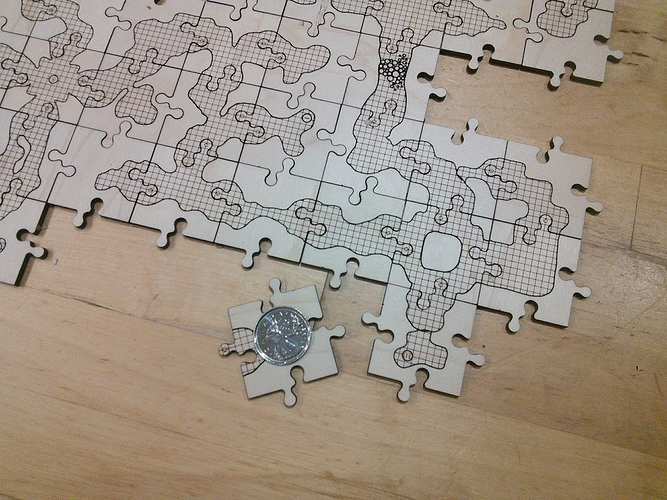 Note that Canadian quarters are the same size as American quarters.

It really pops on that material! It looks great.

Although weeding all the little squares in the grid took FOREVER! My wife and I spent almost an hour getting it all off.