Embedding a word into concrete

We are redoing our front yard and created a meditation/reading area in the bamboo.

Needed a word of inspiration.

Right in the concrete!

Should last years. Even once it rots out, the word will be left behind!

Note that the design is much more visible now that the concrete has set/dried more than it was when first placed and wiped down. I’ll probably gently sand in this area and then apply some sort of seal – spar varathane or the like – to try and make the wood last a bit longer. Even once the wood is gone, the design will remain. 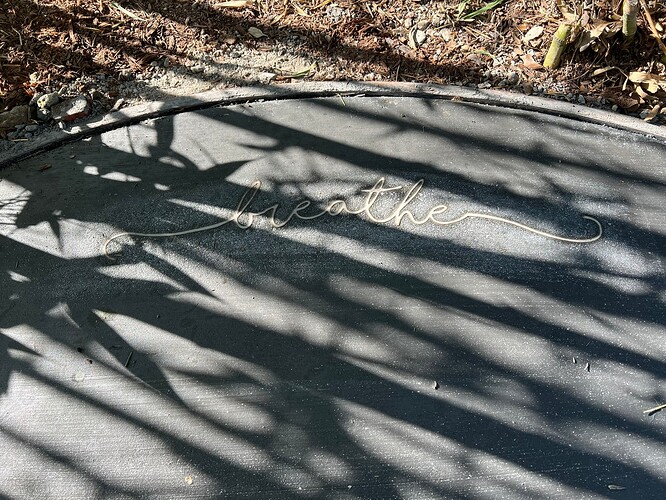 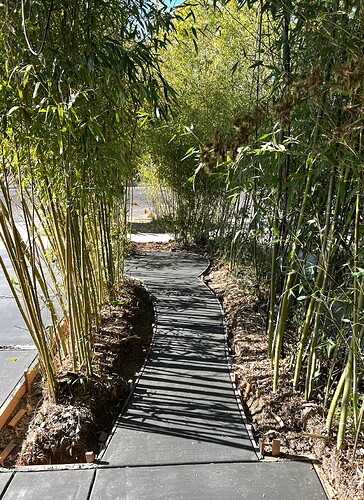 What a cool idea!!

Nice touch! How much water does the Bamboo need?

Surprisingly little. I’ll water it a few times throughout the summer. Give it a really good soak.

Thanks! I’ve always loved Bamboo, there’s an exotic feeling in it for me. I wish I could grow it around my pond to separate the area from the yard and create an area like you have around your sidewalk.
Makes a nice blind.

Makes a wonderful blind, for sure. This was planted because our next door neighbor, at the time, had a bit of used car lot going on in front of their house and I didn’t want to look at it.

But it will take over. This stuff has gone under the sidewalk to grow on the other side. When we redid the driveway, the roots were a bit more than halfway across the 2 car+ driveway heading for the lawn on the other side!

Trying to contain it is a lie. One bit of root hits the ground? Boom. Bamboo.

There are non-wandering varieties but they just aren’t as fun.

There are varieties that grow great in harsh winter climates. I grew up in MO and we had a huge stand of bamboo that protected the septic pond. The stalks would die in the winter, but then be right back in the spring (and the dead stalks would remain upright, leaving an impenetrable barrier anyway).

There are two primary types of Bamboo, one that sends out shoots that will grow through almost anything, and one that doesn’t. If you plant the type that sends out shoots, it will eventually start growing through your foundation (or your neighbor’s) and the cost to remediate it is high. I don’t remember the actual names, just that when I was looking to plant some at my house in FLA I got a stern lecture from a landscaper along with a count of the number of customers he’d made money off of fixing the problem created by the homeowners who planted the wrong type (including the costs those homeowners had to bear to repair not just their own foundations but also their neighbor’s) .

The HOA for a home we once lived in had massive expenses due to bamboo on property adjacent to the swim/tennis facilities.

Don’t get me wrong, I love the stuff, but learned back then (late 90’s) to steer away from it.

That, and HOA’s in general!

Wow. You guys weren’t kidding, the stuff that reproduces by rhizome is illegal to plant here in Colorado! Sounds like it is worse than Mint. I might give some Phyllostachys aureosulcata (golden groove) a try, it spreads by seed.

Before reading the description I wondered if you’d poured in dyed concrete - which would be cool too, but I love the idea of eventually it being carved into the concrete once the wood is gone

This is beautiful, I love how you left the wood in as opposed to just pressing the design in, even when the wood is gone it will be there for years to come!

I might give some Phyllostachys aureosulcata (golden groove) a try, it spreads by seed.

It all spreads by seed, sometimes going to seed and dying out every hundred years or so depending on species. But there are running types and clumping types. A good friend owned an “island” in the middle of a swamp and they had thought they could control a “running” type. It would not head for open water but it could run for 10’ underground before poking up and looking around

I had a clumping type that took over the other way. It would go up 40’ and start laying over making an umbrella that blocked the light so nothing would grow underneath. There were several nasty vines that would cover most plants till they died, but the bamboo had them beat as no sooner did the vine crawl up the bamboo stalk than the stalk would lean over, and then another lay over that so the vine was pushed off to the edge and shaded faster than it could grow to take over.

What a wonderful idea! That just looks so good!

Possibly the most original idea I’ve seen in quite some time. Awesome.