I have used these for 2 years. No masking or magical dishwashing liquid at all, just straight into the machine - propped up so they are level.

Shop JoyJolt at the Amazon Dining & Entertaining store. Free Shipping on eligible items. Everyday low prices, save up to 50%.

These are great glasses, thanks. Easy to prop them up with a little stack of post-it notes.

I did a quick test with the OP’s settings and got a good engrave, but I had to use a pick to scrape out the top layer where it didn’t release. 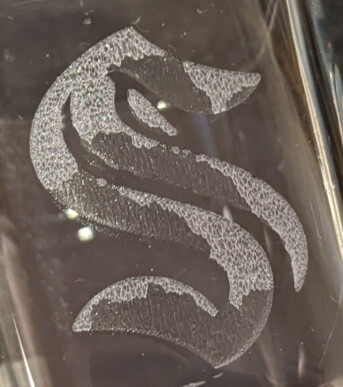 (Hmm, also I just realized I used Pro “Full” power, maybe power 100 would have been better.)

2 passes at power 100 was much easier to clean up, though of course it takes longer. There are also a couple of blemishes that won’t scratch off, I guess due to variation in the glass. Probably only a laser nerd would notice.

Anyone have other settings ideas? It would be nice to find a way to do a whiter frosted glass look so you could have two shades. 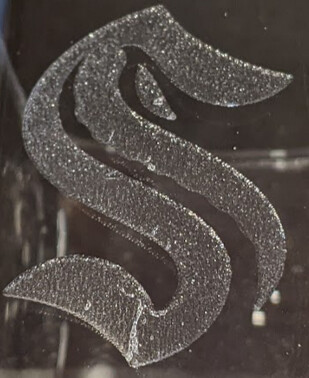 (Any similarity to a major league sporting logo is coincidental.)

My settings for those glasses are gone. I have some for spice jars but my shot glass ones are missing.

I had the same issue where the surface cracked or flaked at first, but I just kept playing with it, turning it 1/4 around, until I got a nice clear engrave. I still have my test piece so I guess I’ll be starting over if I need to engrave some more. These days, I tend to test before anything as material can be so inconsistent.

Not sure you could get a two-tone engrave on glass, but I’ve never tried.

Not sure you could get a two-tone engrave on glass, but I’ve never tried.

Yeah it might not be possible with a laser. I am trying a more defocussed, lower power trial right now. It looks good in progress but we’ll see what happens when it is cleaned…

edit to add: speed 700 / power 30 / focus 0.4 made a really nice frosted etched look… that scraped off in patches when washed. I have a feeling that the laser is just the wrong tool to fog/frost glass.

Actually, just in the couple of minutes since I posted, I thought - it might. If you use a very low DPI raster image (along with a low LPI print setting), you might be able to get that kind of effect.

I was thinking similarly. Going to try a few more vector trials since I’m already set up for it. If anything good happens, I’ll post.

To conclude things for any other readers; for single-“color” on the glasses linked just above, I’m currently fairly happy with Speed 700, Power 100, Focus 0.25, Passes 2.

What Program do you usually use to make the design? I am not currently paying for the Glowforge program because I don’t think it really has good features for $50 a month. I would like to use adobe illustrator maybe.

Also do you usually Engrave more than one at a time?

Sorry I’m still a little new at the design programs stuff but i have etched a PCB circuit board.

I use both Affinity Designer and Adobe Illustrator. You can use any vector art program… those, the free Inkscape, VectorStyler, Corel Draw… there are probably others. If you are proficient with such a program you don’t really need Glowforge Premium. (Gaining that proficiency is the best thing you can do to maximize your use of your Glowforge.)

For these shot glass tests I didn’t actually make any art though. I found logos online and did only basic adjustments and resizing to make them fit the work area.

I have only made shot glasses one at a time so far. If I wanted to make many at once, I would invest time in making some kind of re-usable jig that would hold many in place perfectly.

I can’t thank you enough for sharing these settings. They worked perfectly.

I noticed most people use a cut out to hold the shot glass in place, but in a pinch, I improvised and just used three coasters to hold it in place and it turned out perfectly! 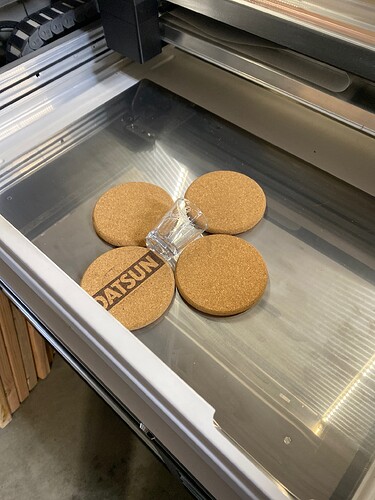