That looks cool. How much are they (if you don’t mind me asking)?

Very nice. It reminded me to post the notepad cover I made last week using JP fake leather.

Field Notes Pleather Cover Made on a Glowforge

I have been playing around with JP saddle collection sheets. Here is a field note cover that I made. The stuff is really floppy to sew, and I think I need to increase the power a bit on the engrave (settings are somewhere on the forum). [IMG_3797] [IMG_3796] [IMG_3795] I used a few magnets to it closed. I freehanded the fold and just put a few books on it overnight. If I had snapmarks I word have scored the fold a bit.

They don’t cost too much. I can’t post the price I paid, but I can say that I would feel fine selling these, etched on one side, for around $25-30.

Gosh, that gold really looks nice! A great item to add to your offerings.

After asking I looked around to see if they were sold elsewhere and found a few options. I’ll tuck the idea away for when I need it!

Hey, my best friend’s dad sent me one of those! He just sent it to me without a note or anything, so I had put my logo on it, then when I sent him a pic, that’s when he decided to tell me it was supposed to be for him 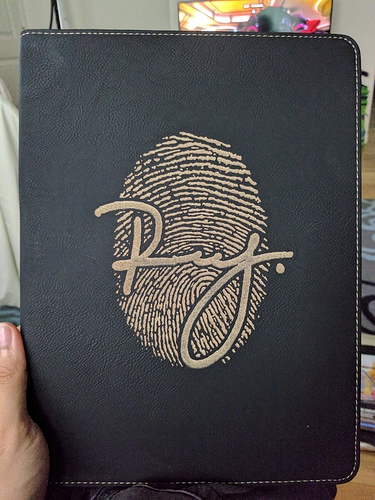 Also, I think there’s a lesson in there about asking (and saying please) when you want a favor!

This is true! He’s like a second dad, and actually gave me access to his JDS account. I haven’t taken him up on it, yet, but I will eventually. I’ve looked through the catalogs and there is some seriously cool stuff in there!

I’ve looked through the catalogs and there is some seriously cool stuff in there!

I can’t wait to see 'em at the NBM convention in Phoenix on Friday. It’s interesting to see the products “in person”. Plus seeing all the other lasers at the show (Universal, Epilog, trotec will all be there displaying).

I saw them at NBM Sacramento, and snagged a bunch of coaster samples. Nice to be able to dial in settings on freebies.

Looks like I know what my second order from them is going to consist of now.

What settings did you use if you don’t mind me asking?

I can’t put the settings in this post, per forum rules.

Enough people have asked me at this point that I finally made a BTM post with my settings here:

Initial settings for JDS Engravable Leatherette Beyond the Manual

Several people have asked for the settings that I used for the color-reveal engravable leatherette portfolio from JDS (and other suppliers, maybe?). I also used these setting for the rawhide/gold colored leatherette-wrapped bottle openers that they sell. These are not definitive setting, but they are what worked for me, and can give you a starting point. Your particular design may benefit from slower speed and even less power. Too much power or poor focus may burn right through the colored l…

Awesome thank you. What did you set your material setting as or did you do the custom material?

I use custom material settings for almost everything, proofgrade included.