Engraved stone tile..what is it?

How cool is this stuff! Found it at a reclamacion store and paid $0.05 for it. First pass it turned a chalky grey black which was pretty cool in itself. Did a second pass and it turned silverish. Did a third pass and it looks like a very deep black, hard ceramic glaze. Interesting there were little pieces of it that never darkened/burned though. It’s sparked pretty good when being burned, but not dangerously so. What is it, is it some kind of slate or shale? 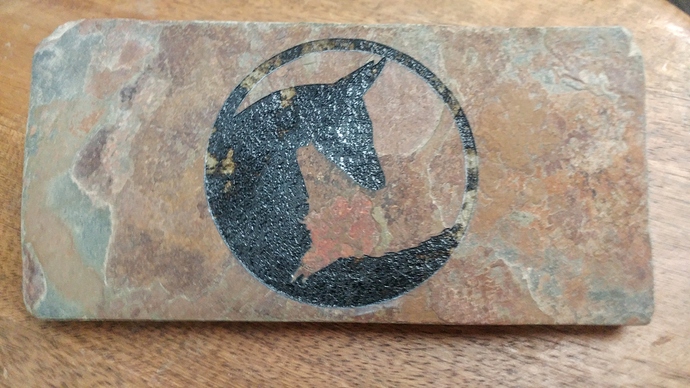 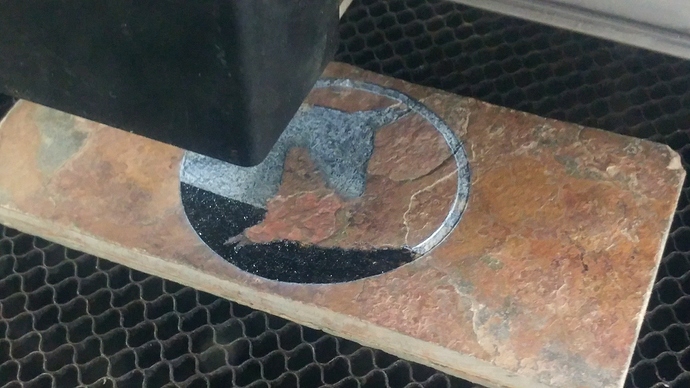 OK, pretty sure it’s slate, maybe “peacock slate”. Going to have to find more of it to see if it all burns deep black.

Definitely slate. Sneaking up the power when I was testing slate in the PRU, I started getting tiny nodules of a glass-like black substance, that under magnification reminded me of obsidian. I backed off the power and never did test like you have here.

Slate is a fine-grained metamorphic sedimentary stone from either clay or volcanic ash. Since obsidian is igneous, I’m wondering if the heat from the laser is producing an obsidian glass layer…

It sure look similar to obsidian. It was really interesting to see the transformations that happened with each pass. The first dark gray one was actually quite pretty and I was hoping to keep the same but just go a little bit deeper. I was pretty surprised when the next one was silvery and then the black glaze of the third one. Now I’m going to have to go get some more slate to play around with it. The sparks were pretty interesting to

it doesn’t look exactly like hematite from the outside, but the inner core after its burned in looks like it. Hematite is basically an iron ore. But I suppose it would be really odd to get a piece in a flat chunk like that

Oh man, thought I had posted this close up view of it! Check it out, so crazy looking @PrintToLaser 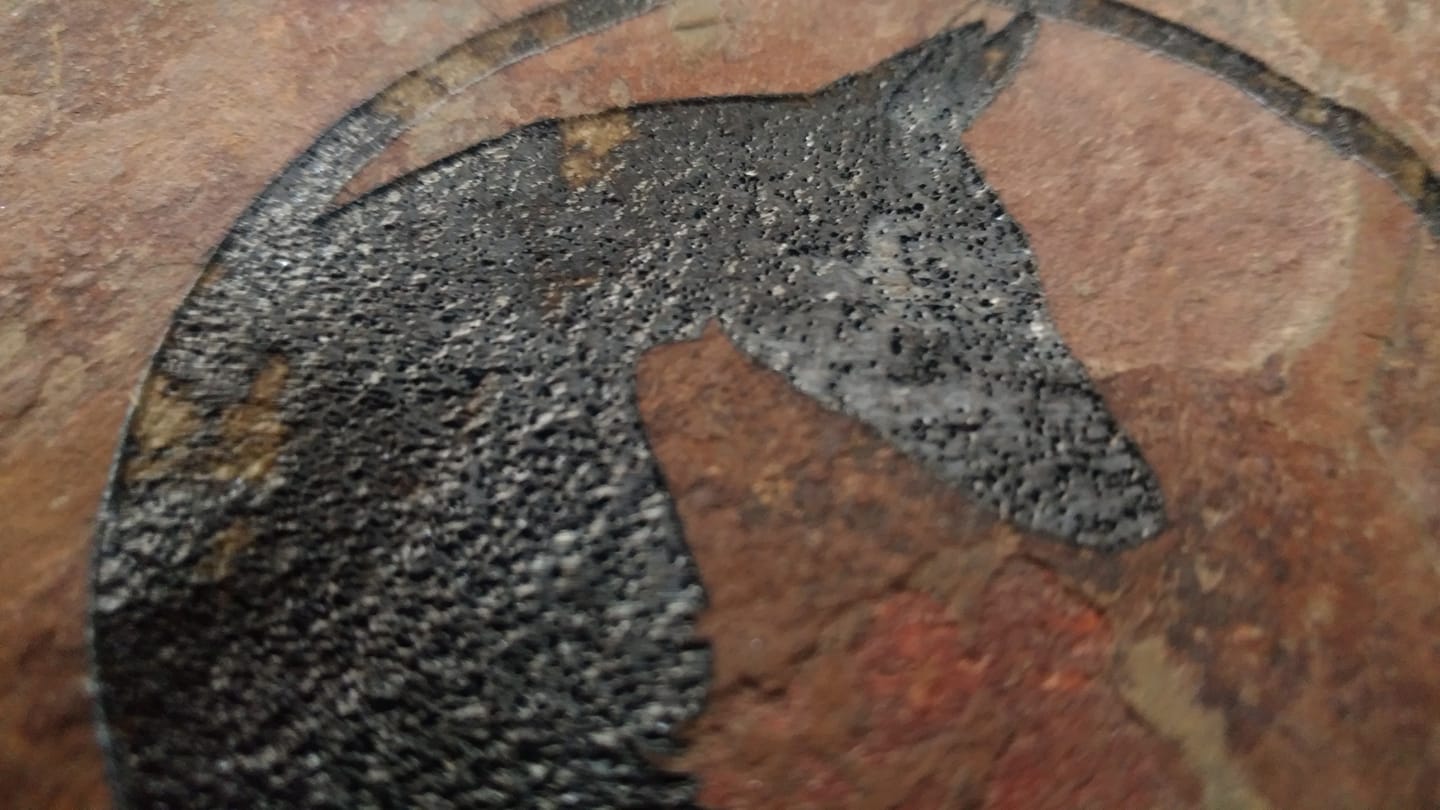 How cool! Thermally fused. Essentially an enamel, a crude glass. From the texture I see surface tension of the fluid dominating and drawing into beads that fuse into one another.

In enameling, a clean surface is required for the glass to ‘wet’ the surface. Under heat of the torch or kiln, when the glass sits on the metal like a bead of water that spreads out, the temperature is right.

With the stone, we see these areas that don’t ‘wet’ because of impurities and off-gassing. Too bad we can’t achieve A smooth enameled surface (note to self, let’s try a flux…).

Right! I knew you’d like that. It looks to be very color dependent. I turned the tile over and did another test. This time all three runs were at a pace 1/2 of 500 with the other numbers we discussed.

The first pic was the second run where it turned silverish. By the third run (2nd pic) the black was much smoother that the first test and very glass-like. It’s interesting to see that it really hasn’t flowed into other areas. The laser burns much brighter when it hits the areas that turn black and it engraves much deeper too.

Just so I can keep notes of what I’m doing, if it’s too much heat/too slow , it doesn’t fuse, just stays the same silvery color. Sped it back up a little bit and it fused again 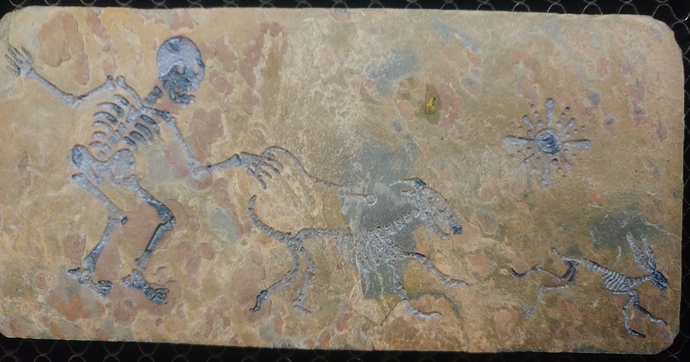 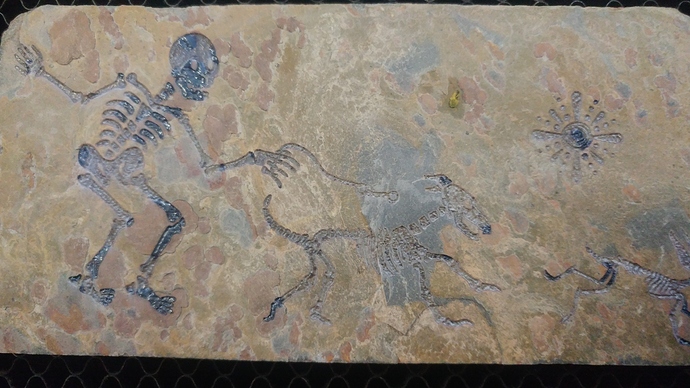 Look how smooth it has fused in the leg! 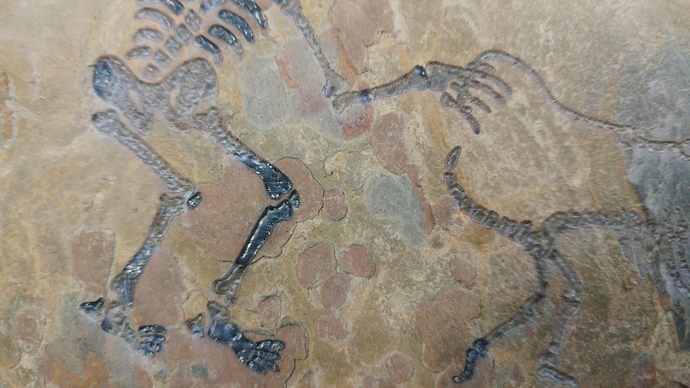 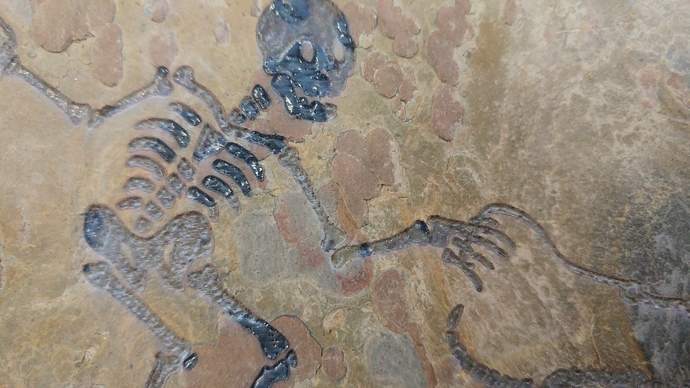 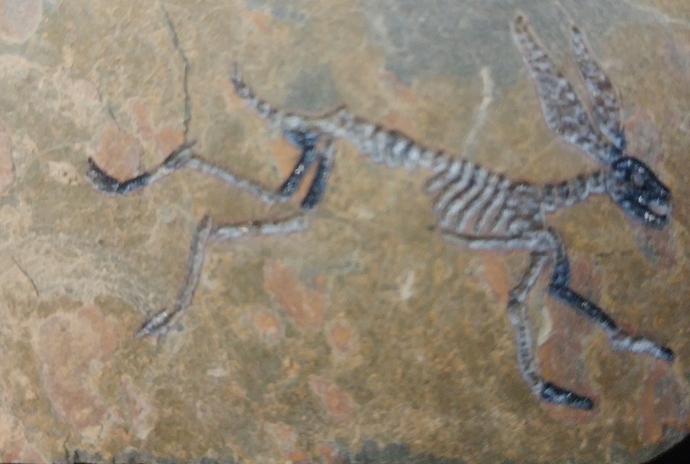 those are awesome. so “cave drawing,” so “fossil.”

I also noted that the black slate (clay origin I presume) didn’t spark like the colored slate did. The colored being softer than the black in my interpretation. Interesting how the different areas react. A reflection of the mineral composition I expect.
Such an interesting exploration of slate. Thanks for sharing that!

I’m doing another pass on the original test of the round graphic to see if I can get it to melt smoother. (Yay for great alignment that allowed me to do it!) I realize now that they silver color and the sparking is coming from the laser going back over the slag produced in the first pass. I’m going to see if I can find some slate tiles at home depot tomorrow and play some more. We need to figure out what the deepest red mineral in the slate is as that’s what’s producing the black slag. Maybe I’ll go post a pic of the tile over in my rock group to see what they say. I’ll let you know if I learn anything. 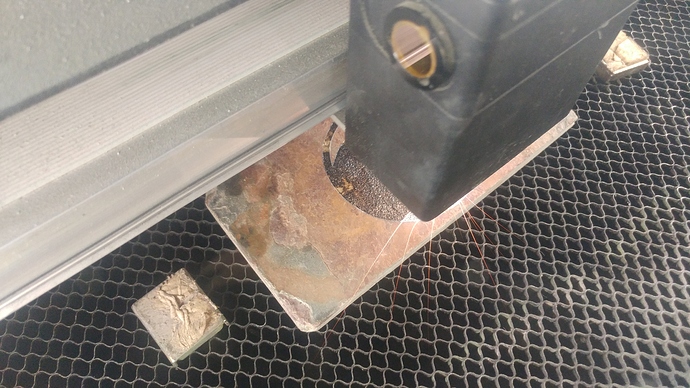 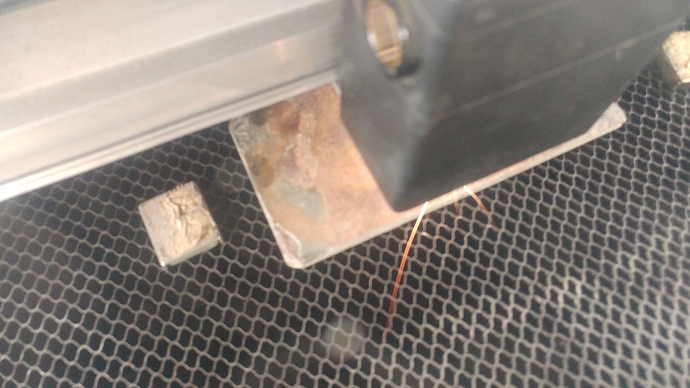 I can’t see the sides well but if what you have is a high Iron fine grain sandstone, it would not be surprising if you were able to melt it. I was proposing something in that direction a while back so it is interesting to see just how deep you could melt it. The high silica should make the glass “wetter” while clays produce a much less mobile melt.

It’s getting pretty deep. I’ll keep going and see what happens. (On pass 4.) The two smaller pieces flaked off the back and the smooth piece was the cut side of the tile. 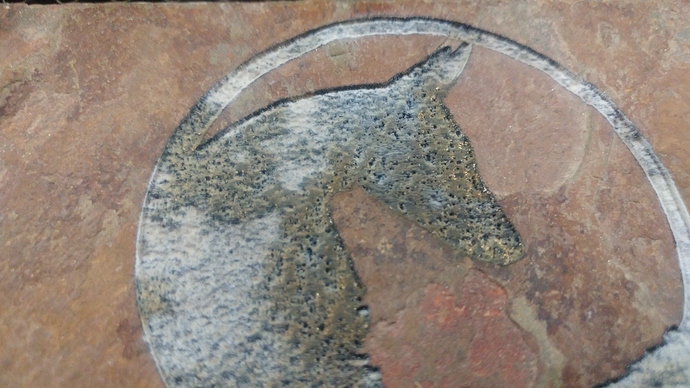 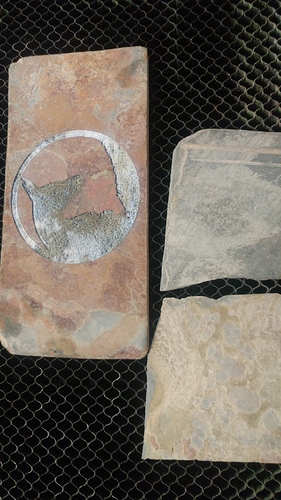 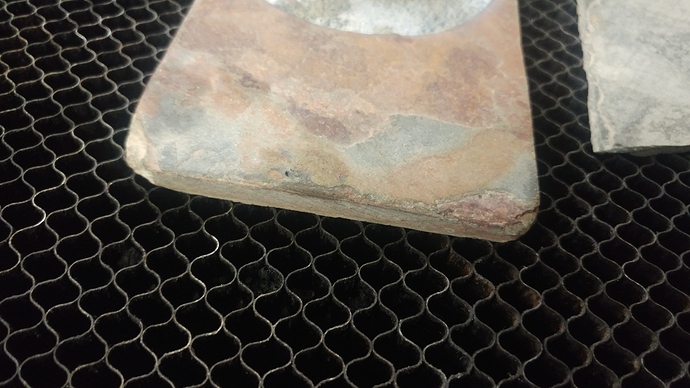 That’s a really cool effect - thanks for sharing the results of your experimentation! Now I want to go out and find some multi-colored slate to play with! 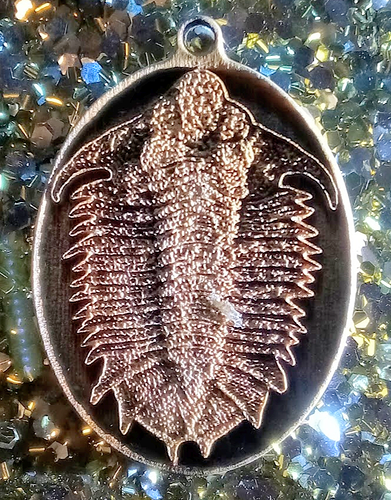 Darnit, I’m clean out of likes and you go do something like this!!!