will be arriving any day now, and I have a project I have to get started on right away and must therefore order supplies before getting a chance to play with them. So I need some advice from experienced Glowforgers.

plywood is cheaper and comes in bigger pieces. But how does it engrave compared to the solid hardwoods? If you engrave through the veneer into the composite beneath is it ugly? In photos I’ve noticed sometimes lasers have trouble engraving through the grain of hardwoods which leaves the grain raised in some areas. Are there ways of avoiding it? Can that be avoided by using plywood instead? Does it engrave more consistently, or does it look fake and cheap?

Thanks for your thoughts and advice.

All I have engraved is the maple plywood and to me or does a beautiful job.

Depending on what you are doing, it may not be a huge price difference between the PG solid & plywood. Last week I quoted out a job for 100 coasters and the price difference for materials was only ~30 cents each. That surprised me and will definitely make solid my material of choice for all coasters moving forward.

I have done light engraves on Proofgrade ply that didn’t penetrate the veneer, and didn’t display much of a raised grain. For a deeper engrave, the consistency of the MDF core gives a pleasing uniform depth, that looks really good painted.

In some cases the raised grain may be desirable. The look and satisfaction are subjective, all depends on what your vision is for the finished product.

If you’re doing variable depth engraving (3D engraving) for effect, you probably want to use the hardwood, since it scrubs up to allow the grain to show in the deeper engrave sections.

Also, if you’re doing variable depth the transition from wood to MDF will be visible.

I prefer to use solid wood for 3D engraving, but for most other uses the

Tried a 3D engraving on a piece of Red Oak. You would have thought that I intentionally tried to create the washboard effect. The differences in density of the early and late season growing rings was night and day to the laser. I’ll bet there was a 1/16" difference between the two ring types, and independent of the intended image. That piece of oak was completely useless for 3D work. Might have been better with a cut that exposed less of the different grain but would still mess with the image.

That piece of oak was completely useless for 3D work.

For solid wood 3D engraves Poplar is a good consistent material with little variation due to growth rings so very similar to MDF in terms of the engrave smoothness/transitions.

Basswood works pretty well too. It cuts like butter, but it does get a bit crispy around the edges.

(I haven’t actually used any of my Proofgrade basswood yet, just some cheap hobby shop stuff.)

Basswood works pretty well too. It cuts like butter, but it does get a bit crispy around the edges.

The Poplar I got (HD or Woodcraft - don’t remember) was a full half inch but cuts easily with just 2 passes - more passes and it started burning/charring.

Thanks everyone for the info. That’s exactly what I was wanting to know. 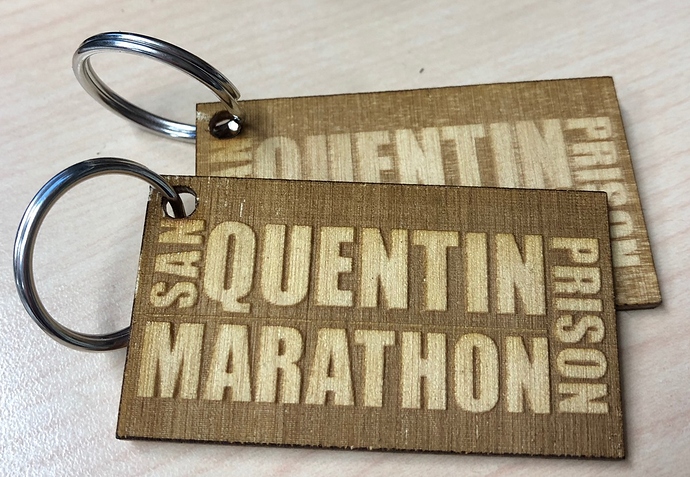 (These were before I cranked the engraving pews to a max of 90 at 1000 zoomies. Doing that darkened up the background quite a bit.)

There’s some great discussion in here. I’m going to move this thread to Beyond the Manual so you can keep talking.

I gave a shot at engraving the above keyring on ProofGrade maple.

… but the light part of the lettering didn’t burn off all the adhesive of the backing so it required a cleaning step!