Do you separate Text and Clipart for engraving?
If I engrave them together, text engraves much deeper than clipart.

Maybe it’s the weight (thickness) of the image lines that cause different depths.
What’s your thoughts, please 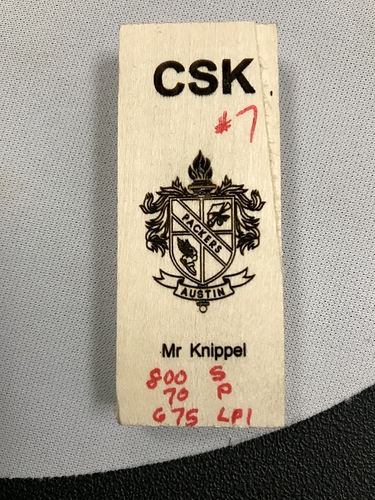 You’re pretty dead on about line weight mattering, but without the source art and settings that you used, we can’t say for sure as to your exact situation.

Hmm still need to see the art. It’s full vector? Or a vector file with a raster embedded?

If it’s straight vector shapes, then yeah it’s probably down to “line weight”, though that’s not entirely the correct term here, because it’s really “shape width”.

You can probably verify this for yourself by cropping it down and scaling it up to compare engrave depths.

So, I should have different settings for 24pt type vs 8pt type, correct?
My settings are in the picture.

Is there a document to read about the relationships between Speed vs Power vs LPi? In Graphic Arts, I would use 720 dpi for clipart - to maintain quality. Is that the same for engraver LPi ?

It’s not an easy thing to codify, because different materials react differently to the laser. Generally, the way I see the physics here is that engraves have a “v” shape to them because of the way that heat transfer works. Therefore for super skinny lines they just can’t get to the bottom of the V and will naturally not be as deep. It has to do with a complex amount of factors, and thought I haven’t tested it, I am fairly sure that increasing laser residency time will probably reduce the effect.

As for LPI, the rule of thumb is roughly 1.5x dpi to lpi is plenty to prevent any artifacts (though I am just parroting what people have said)… and with wood, you’re pretty limited in terms of resolution, the wood fibers are larger than 675 lpi. Higher LPI increases darkness and depth, but after about 270 it doesn’t add much to the end result.

Try taking the settings way slower. Also since we’re on settings, lets move this to beyond the manual, as that’s where GF makes us talk about non-PG settings.

I’d go with something like 300/60/1pass and 270 lpi. Since it’s (as you say) all vector, dots and vary power settings aren’t a possibility so we can ignore that.

In the end, what it comes down to is “do you like it?” if it looks good to you, then it’s right.

The depth of the engrave is a function of how long the beam is in contact with the wood. For skinny little lines, the beam flashes on and off pretty rapidly, so less wood gets burned. For thick text, the beam is travelling over and over again in close proximity, firing the whole time…more wood gets burned. For higher LPI values, the beam is travelling over area that has already been burned, so the rule of thumb I use is, the higher the LPI, the deeper the engrave is going to go, all other things being equal.

Unfortunately a skinny line and a fat line are not equal. So all I can suggest is to experiment a little bit. You might want to burn the graphic just a hair slower (increasing the time the beam is in contact with the wood to darken it), or increase the LPI for the graphic portion and reduce it for the text.

Single pass coverage occurs at between 195-225 LPI. Anything above that and you start to carve down into the wood as your passes overlap. (That’s really the one that it helps to remember. Everything else is just tweaking.)

You could also do the engrave and the text in different colors in your design software so the GF UI sees two operations and you could assign different power values to each.

It takes more energy to pierce the material than to keep on once you’re in the groove, so to speak.