Today, the printer did something totally unexpected and just plain wrong. I was laser-printing an alignment test. The diamond I place at the center was being cut in the wrong place. The whole design was offset by about 7 inches to the left. Machine tried to continue cutting even though it reached the edge.
The picture shows the diamond printing on the right side of the paper, whereas the GFUI has it correctly in the middle. I have not been able to reproduce this anomaly.
How can I trust that the machine will behave when I am using expensive materials? 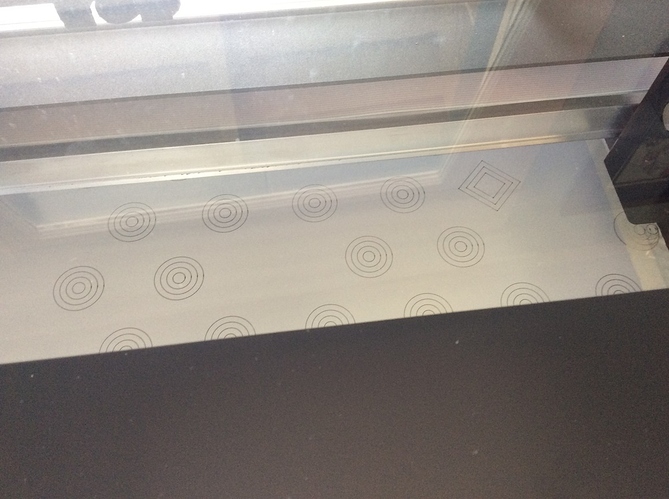 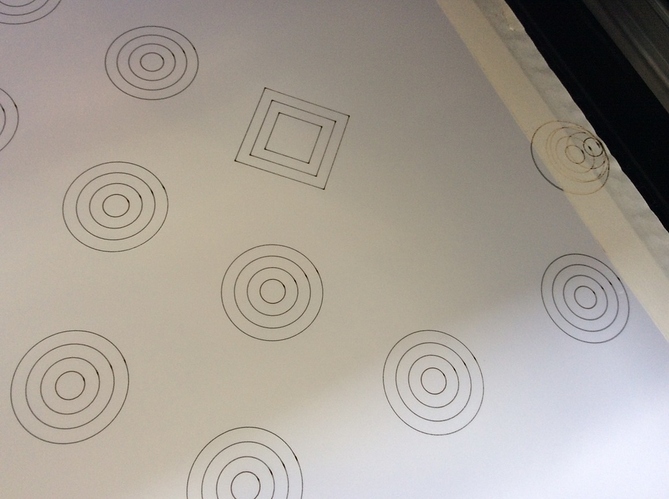 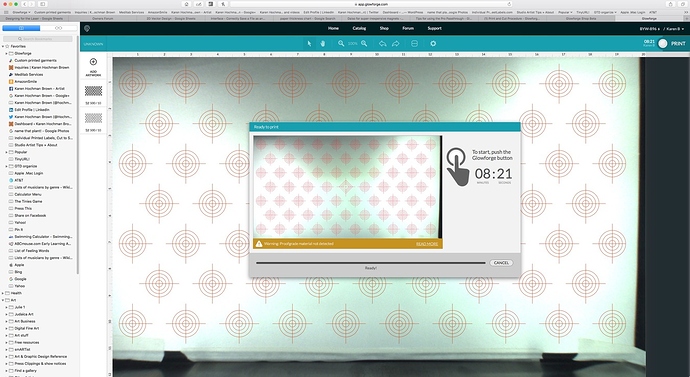 A couple reasons that might happen. For some reason it may have lost it’s center calibration. Is there any chance that you moved the head with power on?

Unless you are saying that the entire alignment design was cut at the same time. If so is there any chance that you didn’t allow the entire preview with all of the circles and diamonds to load before you pushed the print button? I’ve seen complicated designs not cut every component that way. Ignore the flashing print button light. That is not always an indication that the processing is complete and downloaded. Wait until every component appears at least once on the GFUI before pressing the Print button.

Has it been confirmed that not letting the preview load the red lines actually causes a problem? There was another discussion today saying this has been disproven. As a software engineer, I cannot fathom a scenario where this would actually be a problem. The preview should be unrelated to the file that is generated and sent to the Glowforge similarly to how sometimes the screen doesn’t refresh when the print is done. or how refreshing the page doesn’t cancel the print.

Has it been confirmed that not letting the preview load the red lines actually causes a problem?

Yes, support has confirmed it in several responses to other people who had similar issues.

I haven’t seen the discussion you talk about as yet. I will say speculation runs rampant on this forum. But here is a response from support about why something didn’t print correctly.

Job finishing but not completing all actions

I’m sorry your print didn’t turn out beautifully. Thanks for letting us know about this. I’ve researched this print, and here’s what I found. Because the app took some time to load, you pressed “Print” before it was fully finished loading, which led to an incomplete print. I will pass on feedback to the team about this.

I have seen the problem of missing components. The failure to print some of your components in the correct place may or may not be related. I can see by your file that it would take some time to fully populate the render. Many people would not be patient. Whether or not your problem is caused by the above is only something that can be determined by examining your log file. That aside… you would be well served to wait until the render is fully populated to avoid failed prints.

As far as the Preview being unrelated to the file that is generated… Yes and no. It isn’t looking at the file on the GF but according to the company is parsing the same information downloaded to your browser. We can’t know the timing between the GF itself and your browser. Is there a half second difference between Print light and Preview load? Is there are 30 second difference? No way to know. I prefer to take the advice of support and give the file time to fully download.

Limit on how many paths per glowforge job?

It’s not a preview, but actually a full Glowforge emulator that runs in your browser and parses the same cutfile that gets sent to your Glowforge.

Thank you. I had something fall behind the crumb tray and was looking for it before the anomaly. I am sure I moved the head at that time. What is the proper procedure after the head has been manually moved? Do I turn off and restart, or is there a way to recalibrate from the software?

What is the proper procedure after the head has been manually moved? Do I turn off and restart, or is there a way to recalibrate from the software?

It will need to be turned off for it to recalibrate.

Probably not a good idea to intentionally move the head with power on. Can’t say whether it could damage anything but the motors are fighting you. Support always recommends turning power off before moving the head.

Thanks for letting us know that happened. To get printing again, please:

If your Glowforge has trouble calibrating again, please start a new thread or email us at support@glowforge.com. Thanks!