Job finishing but not completing all actions

I made some ornaments for my wife’s class despite issues with engraving and scoring (for which I created a separate support thread), and my mom wanted some as well.

The glowforge is currently at my parents and while my dad was there with the machine on the phone I sent the job to cut from another location.

For some reason after the job said it was completed on my end and the machine had stopped there were parts of it left undone.

About 3 of the ornaments were missing the 2017, 4 others did not cut out the hole in the top to hang them from, 1 was missing a small part of the engraving on the hat, and none of them did the final cut around the ornament. 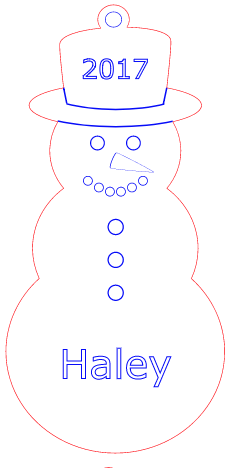 Just guessing, but you used red for the outline cut color and the little hang hole is blue so that is perhaps why that did not cut out

Ah maybe, I will check, but this is just a screen grab from the first file I made I am pretty sure it is red in the file with all the ornaments. But it also didn’t engrave either the holes either, it did nothing (on the 4 ornaments, it worked fine on the others). Also that doesn’t explain none of them cutting out or the date on 3 not engraving, or a small piece of the hat not engraving on 1 ornament.

Just checking - you actually uploaded a vector file, not a bitmap, right?

Did you have any of the components outside of the no-go zone (indicated by the hash marks)?

Yeah it was a .svg and no nothing outside of the no go zone.

I’m sorry your print didn’t turn out beautifully. Thanks for letting us know about this. I’ve researched this print, and here’s what I found. Because the app took some time to load, you pressed “Print” before it was fully finished loading, which led to an incomplete print. I will pass on feedback to the team about this.

There is a shortcut you can use to work around this issue: