Error: An unexpected error has occurred.?

Trying to upload a 1,704KB plain SVG. It contains a gear with bazillions of nodes, so my guess is this is causing the problem. I attempted the upload 5/27/2018 at 9:55AM on East coast; the browser showed https://app.glowforge.com/designs/7aRwzZz8/edit
Rendering Your Design ran for 5 minutes and then the Error.
How can I find out what the Unexpected Error is?
If the problem is due to large node number, how can I get this printed on my machine?
Afraid Inkscape Simplify will make gear teeth too inaccurate to mesh with other gear.

Unfortunately, the error can pop up for a number of reasons. If you share the file here, someone may be able to take a look at it and make some suggestions.

For positioning, you can use the add button to add to the previous print job, then delete the already printed elements before proceeding.

For positioning, you can use the add button to add to the previous print job, then delete the already printed elements before proceeding.

You don’t have to do this. If you start deleting things, etc. the GFUI remembers.

If you make multiple files you can just load them via the GFUI as long as you don’t move anything once you open the first file. The margins in the file will be just as accurate as the vector data that you’re cutting/scoring/engraving.

I often reposition items so the original placement may not be true. If not repositioning, your way is faster! I’m a material miser…

I don’t know what program you use. I use Silhouette Business Edition because I was used to it. It’s for a craft cutting machine, but you don’t have to have the machine to design. The Business Edition allows you to save files as SVGs or true vector PDFs. I always save as a PDF and never have problems. Perhaps your software can do that? I’m not sure if that eliminates the node complexity.

Hi I also use Silhouette BEdition (as a Cameo user I am also used to it), Is there a specific reason to save in .pdf and not .svg? TIA …

Here is the zipped file. The original gear file takes quite a while to open in Inkscape. What other software might allow turning straight-line segments into curves/polycurves to save node count?
I wonder if the Glowforge folks have any long-range solution planned for this sort of problem?
clock face 135 ring gear scaled fiducials scored final plain.zip (123.8 KB)

Ummmm…afraid I’ve got some bad news that you are probably already aware of. What software was used to create that gear?

The gear consists of unjoined segments. It’s not that there are too many nodes, it’s that each minute segment probably consists of overlapping endpoints. So you are correct - simplify isn’t going to do it for you until those are joined.

I don’t know how to do it in a batch process in Inkscape. I would have to test it to see if it could be done all at once instead of point by point, which would be ridiculous. I’m testing to see if it can be done with a Concatenation plugin that I use in Illustrator, but so far no joy.

(Some time later)…okay, I had to split it into two parts for processing to keep from crashing Illustrator, and then I was able to join the segments with the plugin, and now the file loads without a problem. I didn’t even need to simplify it, the problem was the unjoined segments. 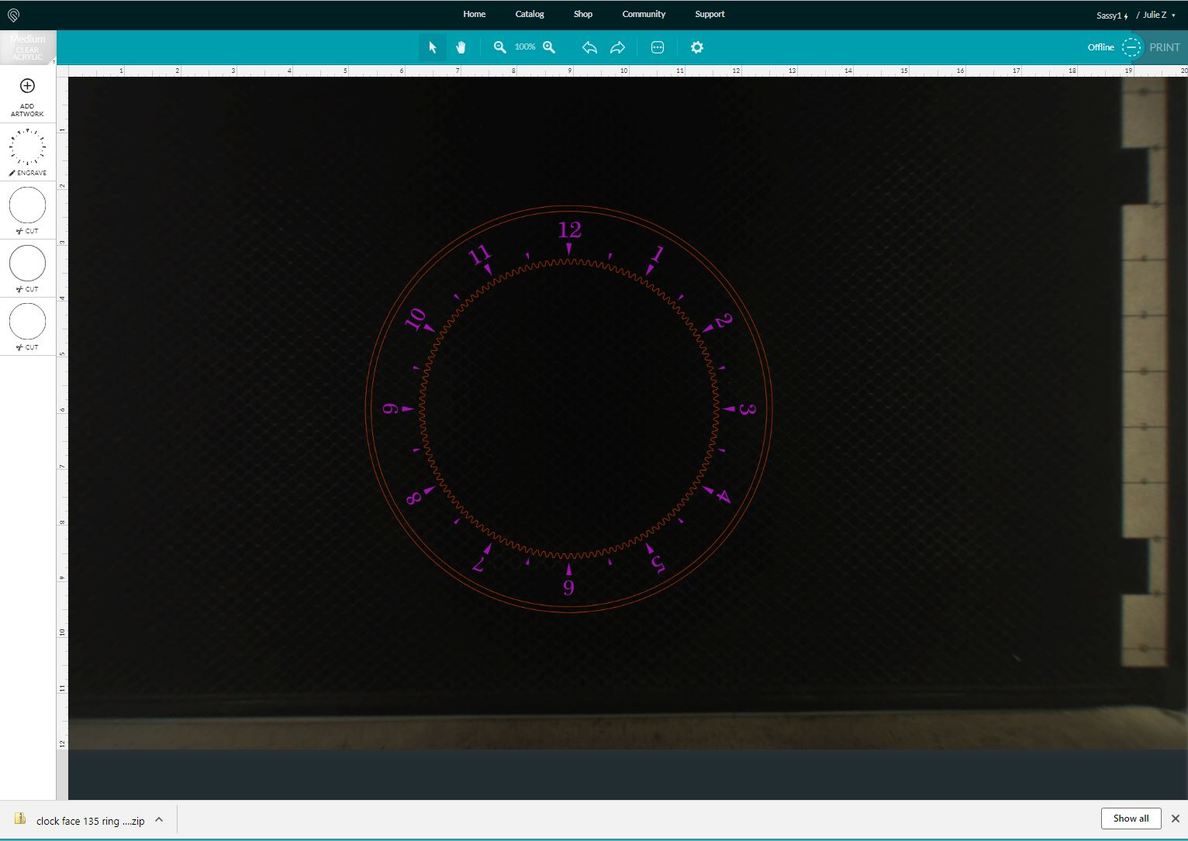 I have had luck connecting unjoined segments in Inkscape just by selecting all and choosing “Join”. Sometimes you can’t select everything and have to do it in batches. Select some or all of the segments, then click on the Node tool. Now do ctrl-A to choose all the nodes, and shift-J to join them.

That’s good to know - I hope it works for this many points. I’d check results with some serious zoom to make sure everything connects correctly on something like this.

Gear was created using Gearotic software which outputs DXF format. This was run into Vexx to convert the DXF header to one that Inkscape can Import. To do any editing in Inkscape of the gear I had to Ungroup or Break Apart, I’ve forgotten which. maybe that’s where my mistake lies.
About 40 minutes ago I tried to Upload to GF the PDF file made from the Plain SVG. It’s been running (processing) ever since. I think bill_laba suggested this.
So now how to abort the ever-running pdf upload?
Thanks, Jules, for figuring this out.

Just let the PDF finish - you can go into Inkscape and try the Join procedure and see if it works while the GF is chewing on it.

I’ve never heard of Gearotic or Vexx, but I suspect that might be where the problem originated. Some DXF files are exported as disconnected segments instead of joined curves, and that can only be addressed inside that software. (One of the reasons Glowforge doesn’t process DXF files yet - there are too many possibilities.)

Sorry that the PDF conversion didn’t seem to work on the complex file. Sounds like @Jules found the issue with the file.

It’s just what I’ve gotten used to. I’ve not run into a file I couldn’t run using the PDF save and haven’t used SVG enough to see if there would be a difference. I just threw it out there for this as an option when the first thought was that there were too many nodes in the file in question. I’m not sure how the excessive nodes are handled when converting to PDF. I haven’t seen any degradation of images when saving as PDF, if SVG works, I’d say keep using it.

Under Path in Inkscape, where is “Join”? I see Combine and Union. Are one of these used to get the Join?

She suggested clicking on the Node Edit tool (the white arrow) then CTRL+A to select all the nodes, then SHIFT+J to join.

I had a similar issue that was solved with the union command. There are times when that throws a lot of errors but they are big and obvious. In short any area covered will become one area but sometimes when the area is too complex it loses some of it.

If there are many disconnected pieces combine works better but if there are overlaps the overlaps will remain alternately filled and unfilled and a great potential mess, though more useful if you have say a set of holes inside the design. Union will make them vanish, difference will cut them out if they are one thing, but combine will work best in that situation.

My progress here is slow or lacking. I managed to get all 13,778 nodes selected on the gear teeth and followed elizabeth’s directions. After 10 hours of working, Inkscape finally crashed (Not Responding). Task manager earlier reported that CPU was at 25%, Physical memory 51%, and my disk drive showed NO activity. The Inkscape screen showed its action wheel running. Maybe an Inkscape problem and not my hardware? I will try again tonight and let it run overnight.
Before this, I successfully printed jules 35.8 KB file. Yea! But it turned out to have dimensions changed. So it didn’t fit the pinion gear. I’ll re-size and print again.
Thanks to all for the help!