Hello - On July 8, I posted about a brown liquid that was sitting outside the glowforge machine on the desktop that I have it housed on (Post Name- Brown Hard Liquid at back of machine and now exhaust fan isn’t running right. I was instructed to order the 3M Degreaser spray and to follow the cleaning instructions. As soon as I received those instructions, I placed an order with Amazon. However, the package arrive open with no contents inside. I ordered a replacement from the DigiKey site and it arrived this afternoon. I followed the cleaning instructions and still the fan is not working. The machine engraves, but the exhaust fan does not spin and will not remove the smoke. I am over a month behind in customer orders now and not sure what to do. I need to have the machine up and running as soon as possible. I am at a loss for what to do. I have a customer that needs something finished for her wedding and it is in a couple of weeks. I am panicking at this moment and don’t know how to proceed. Any help is greatly appreciated.

I bet if you gave it some help with your finger it’d start up but it would be noisy as hell and it probably wouldn’t run long before seizing. I’m thinkin’ GF needs to send you a new fan. They should be able to do that and you should be able to swap it in with time to spare to hit your deadline.

Thank you Randy. I tried doing what you suggested, but nothing happens. Thanks for trying to help out. Hoping it is an easy fix.

I am panicking at this moment and don’t know how to proceed.

If the fan has a hydrodynamic bearing (oil not ball), the brown fluid was probably the bearing oil

That makes sense, I know of no brown liquid in the machine. That doesn’t mean it doesn’t exist.

@gcifers, is your machine still under warranty? If not, this is the exhaust fan. Search for a supplier, it should run around $35. That fan does something like 13,000 RPM. If you have any warranty available deal with the company, if not, you might post in “Everything Else” asking if there were someone near you with a ‘forge’ who could help you reach your order. Lots of kind souls here. 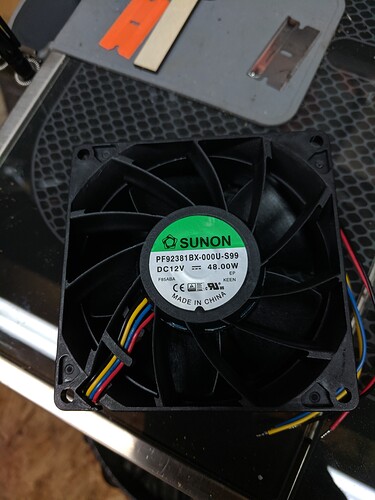 Note that the connection plug doesn’t come with it. You can google how to replace that.
PM me, I can help you with opening the laser case for access and fan replacement - If you have a mechanical aptitude and confidence in your ability to deal with replacing it. The process really is simple.

It’s a ball bearing fan according to Sunon, so bearing oil isn’t the source.

If the cooling system leaks, maybe it’d run out carrying with it whatever dust had accumulated in its path. That might be brownish.

Was the brown stuff dry or oily?

I can’t imagine any other source of liquid that might run out from the machine. Did you maybe try to laze something that had a high water content? I don’t know what, Watermelon slices, maybe?

That all being said, there’s nothing special about this fan. It’s like dozens I’ve replaced in computers over the years. Some last a lot longer than others, but they all fail and generally at a higher rate than I’d like. I switched to using hydrodynamic bearing fans and they seem to last a lot longer. There is a version of this motor from Sunon with this type of bearing. I was considering suggesting it as an upgrade. But the GF is a very “dirty” operating environment, a ball bearing might last longer than a hydro bearing. Though it might just be a function of how the bearing is sealed… sooo confusing.

US suppliers DigiKey and Mouser both carry this fan and are highly reputable suppliers. Though you can probably find one cheaper on Amazon or eBay. It’s pretty easy to find.

The pics from before really looked like concentrated smoke residue but I can’t imagine where that much fluid came from.

Smoke is actually sort of, kind of wet… wood produces H2O when it burns… but something really strange would have had to happen to concentrate enough laser smoke to produce wetness like that.

Thanks for taking the time to get the degreaser to run the fan maintenance. I am so sorry that you had to order it twice, what a headache! Since that didn’t improve the performance of your fan, I followed up in email about your next steps. So, I’m going to close this thread.